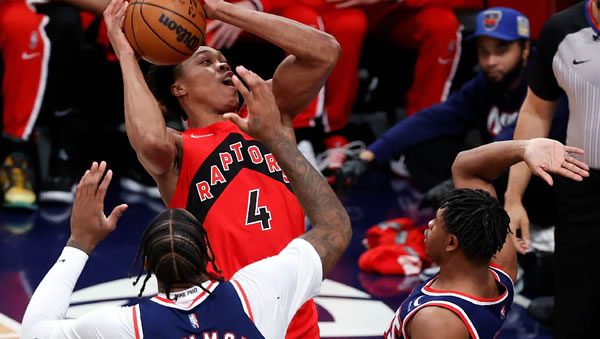 The Toronto Raptors host the Philadelphia 76ers in an Eastern-Conference matchup. Tip-off is set for 07:00 PM ET at the Scotiabank Arena.

The Philadelphia 76ers come into this game with an overall record of 51-31, placing them 2nd in the Eastern Conference. So far, Philadelphia is above .500 on the road, holding a record of 28-15. Over their last five games, the 76ers have played well, picking up 3 wins. In this stretch, Philadelphia’s offense is scoring right in line with their season average, putting up 107.0 points per game. Combined, the 76ers’ last five opponents are giving up 107.0 points per contest. The 76ers have been picking up wins while holding opponents to an average of 104.0 points per game, similar to their season average of 107.2. In the Philadelphia 76ers’ most recent game, the team fell to Toronto by a score of 103-88.

The Toronto Raptors come into this game with an overall record of 48-34, placing them 5th in the Eastern Conference. So far, Toronto is above .500 at home, holding a record of 25-18. Over the Raptors’ last five games, they have picked up just 2 wins. In this stretch, Toronto’s offense is scoring right in line with their season average, putting up 104.0 points per game. Combined, the Raptors’ last five opponents are giving up 107.0 points per contest. In this recent cold stretch, the Raptors are allowing an average of 107.0 points per game, similar to their usual rate of 107.1. In the Toronto Raptors’ most recent game, Toronto took down Philadelphia by a score of 103-88.

The 76ers come into this game as the more efficient offensive team, averaging 110.2 points per 100 possessions. When playing as the superior offensive unit, Philadelphia is winning at a rate of 69%. These victories are coming by an average margin of 12.0 points. On the other side, the Raptors hold the advantage on the defensive end of the floor. So far, they have played 28 games as the better defensive team, picking up 17 wins (61%).

Heading into today’s matchup, the Philadelphia 76ers and Toronto Raptors have met up for 9 games. In their last meeting, Toronto picked up a 103-88 win.

After this series between the Toronto and Philadelphia appeared to be wrapped up early, the Raptors have rattled off 2 straight wins, including an impressive 15-point victory on the road. Throughout his tenure with the team, Toronto coach Nick Nurse has shown the ability to make adjustments on both ends of the floor. This appears to be happening yet again, as the team held the Sixers to just 88 points. Now, with the series shifting back to Toronto, the Raptors have an excellent chance to force a game 7. Even still, Philadelphia comes into the game as the 1.5-point favorite. However, look for the Raptors to come up with another big performance, fueled by a home-court advantage that is one of the best in the league. Bet your Sixers vs. Raptors pick and ALL your NBA playoffs bets for FREE by taking advantage of a 100% REAL CASH bonus on your first deposit up to $300 at MyBookie Sportsbook when you use bonus code PREDICT100 when registering for a new betting account!