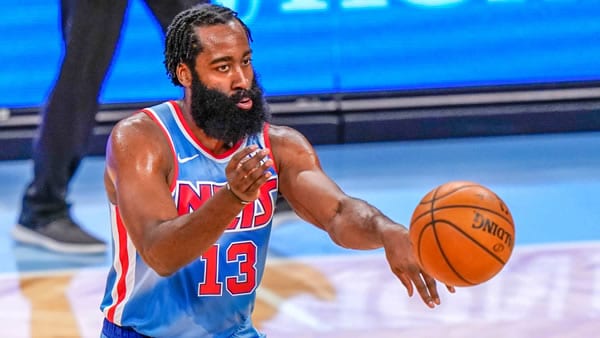 The Brooklyn Nets enter today’s game, having won 5 straight games. In their past ten contests, the Nets’s have played above .500 basketball, going 7-3

As the road team, the Nets travel to Chicago with a positive plus-minus of rating 0.2 points. Overall the Nets are ranked 10th among NBA teams in point differential (4.8).

Among NBA teams, they have played the 18th toughest schedule.

On offense, the team’s leading scorer is SF Kevin Durant. So far, Durant is averaging 28.6 points per game. Durant has also been in charge of cleaning up the glass, hauling in 8.6 boards per game.

The Nets’ best three-point shooter has been James Harden, connecting on 3.1 shots from downtown per game.

The Chicago Bulls enter today’s game, having lost two straight games. Even though the Bulls are on a losing streak, they have an above .500 record in their past nine games, going 6-3. This mark has come while playing the 17th toughest schedule.

As they get set to host the Nets, Chicago has a favorable home plus-minus of 5.8 points. Overall the Bulls are ranked 5th among NBA teams in point differential (-0.9).

For bettors, taking the Brooklyn Nets to cover the spread has been a winning bet as they are covering the spread in 66.70% of their games. Their season-long plus-minus against the spread is 3.2.

On offense, the team’s leading scorer is SG DeMar DeRozan. So far, DeRozan is averaging 26.78 points per game.

The Bulls’ best three-point shooter has been Lonzo Ball, connecting on 2.67 shots from downtown per game. Nikola Vucevic is the team’s best rebounder, hauling in 10.78 boards per game.

In this game, Chicago should have a stronger influence on the pace that this game is played. On average, when playing average-paced teams, Bulls games finish four possessions below the league average. However, they win these contests just 34% of the time.

Chicago has the challenging task of slowing down a Brooklyn offense ranked in the top in offensive efficiency. In these games, they allow opponents to score four points per possession above expectation. On average, they lose these games by a 6 point margin.

When Brooklyn faces off against teams similar to the Bulls, they play defense near a league-average rate. Historically, they win at a 63% rate.

The Nets have the most significant mismatch against a mediocre Bulls defense. When playing teams profiling similar to Chicago, they score 7 points possession above the league average. This output has led to a win percentage of 64%.

Last year, the Nets and the Bulls met up for three games. Brooklyn the series 2-1. Combined, the Nets outscored Chicago, 327-313. Brooklyn had the largest margin of victory in game 3, winning 105-91.

54% are betting the Nets against the spread.
58% are wagering on the game to go over the posted total of 215.

The Nets come into this game as the road underdog. Having played last night, they must face the Bulls on short rest. Still, I have Brooklyn walking away with the straight-up victory. I see Kevin Durant and James Harden having big nights on their way to a 115-111 win in Chicago.

As of right now, there are no prop bets available. However, for Brooklyn, I would key in on Kevin Durant, who is in line for a big night against a suspect Bulls defense.

If Demar Derozan has a prop line around 20-21 points, I recommend taking him on the over.