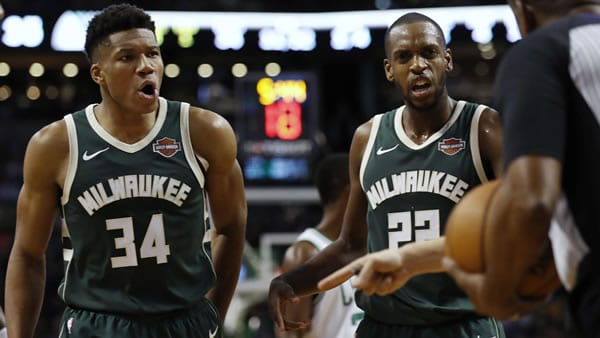 After losing home-court advantage for this Eastern Conference finals by losing Game 1 at home, the Milwaukee Bucks regained it by winning Games 2 and 3. The Bucks now shoot for a 3-1 series lead when the teams meet for Game 4 Tuesday night again in Atlanta. The big news going into this contest is the health of Hawks star guard Trae Young, who suffered an ankle injury Sunday night. That’s why the line on this game is a bucket more than it was for Game 3. Can Milwaukee not just take Game 4 but cover a touchdown against the point spread? Can Atlanta at least keep this one close? And how are we betting this game with our free NBA playoffs betting pick?

The NBA playoffs betting market opened Milwaukee at -6 for this Game 4, with an over/under of right around 222.5. Early betting action then bumped the Bucks to -7 and dipped that total to 219.

Those looking to eschew the point spread on this game could get Milwaukee at -260 on the money line at BAS , while Atlanta could be found getting +245 at Intertops to win this game outright.

Milwaukee leads this series two games to one after taking Game 3 Sunday night in Atlanta 113-102. The Bucks trailed the Hawks 15-2 out of the gate Sunday night and 95-88 with seven minutes to go. But Milwaukee then ended the game with a 25-7 run for the victory and the cover as five-point favorites.

The Bucks shot 51 percent from the floor on the night, held Atlanta to 46 percent FG shooting, out-rebounded the Hawks 50-35, and won points in the paint 56-34.

With Sunday’s loss, Atlanta is now 9-6 both SU and ATS this postseason.

The Hawks took a hit Sunday night when Young stepped on a ref’s foot late in the third quarter, turning an ankle. He was hobbled the rest of the game, clearly not himself, and is listed as questionable for Tuesday night. Our guess is he’ll probably play, but how effective will he be?

Atlanta is already playing without F De’Andre Hunter (15 points, five rebounds per game this season), who’s down with a torn knee.

The Bucks played five games better than the Hawks during the regular season, 46-25 to 41-31, and took the season series from Atlanta two games to one. So Milwaukee is now 4-2 both SU and ATS this season against the Hawks.

The Bucks are 4-3, both SU and ATS on the road this postseason.

The Hawks are 3-3, both SU and ATS at home this postseason.

Unders are 8-4 in Bucks games this postseason.

Unders are 10-4 in Hawks games this postseason.

Unders are 2-1 in this series, as the games are averaging 220 total points against an average over/under of 225.

Totals are split 36-36 this NBA postseason.

Milwaukee took charge of Sunday’s game after Young hurt his ankle, and it’s only common sense to believe the Bucks should put Atlanta away if he can’t play. But ankles are kinda strange; they can hurt like hell at first, but after a while, you’re OK, as long as no serious damage was done. We expect Young to play Tuesday night, and while he won’t be 100 percent, he can still be effective. And if that’s the case, the Hawks can keep this game close. Plus, they’re getting an extra bucket on the betting line. They might not win this game outright, but we like Atlanta plus the points here for our free NBA playoffs pick for Tuesday. Bet the rest of the NBA playoffs FREE by taking advantage of a 100% real cash bonus on your first deposit of $100 to $1000 at BetNow Sportsbook!