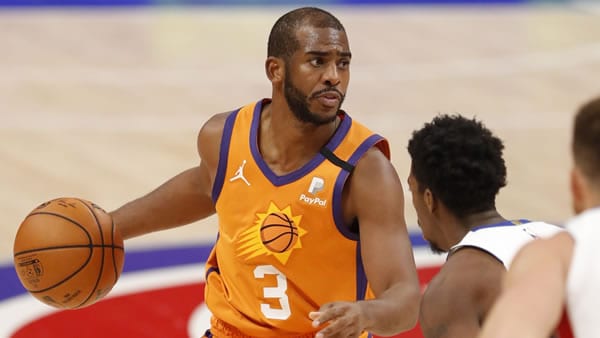 The Dallas Mavericks enter Wednesday with a 9-5 record. Dallas had their two-game win streak snapped on Wednesday in a 105-98 final. 98-points was the Mavericks lowest score so far this month and the first time under 100 points in 10 games. The team was without Luka Doncic for the first time this season, and his status is “doubtful” in their rematch with the Suns Friday. The team will look to stay above .500 as they wait for Doncic to return healthy next week. Doncic leads the team with 24.9 PPG and leads the team in assists and rebounds per game.

Offensively, the team scores 104.5 PPG and defensively gives up 105.6 PPG. Despite a winning record, the Mavericks have a -1.1-point differential.

The Phoenix Suns hold an 11-3 record through 14 games and increased their win streak to 10 games on Wednesday. The Suns were tested in their last two games as against the Timberwolves, they fought off a late run, and against the Mavericks, trailed through three quarters and finished with a 37-point quarter. Devin Booker currently leads the team with 23.0 PPG. The Suns offense distributes the ball well, as the team is third in the NBA for team assists. Phoenix is one of the hottest offenses in the league, averaging 110.6 PPG, and gives up 104.9 PPG on defense. The team’s 5.7-point differential is among the top in the NBA as well.

Suns Offense is a Mismatch

Phoenix is quickly putting their NBA Finals loss aside in an explosive 11-3 start to the season. While it’s nothing new that the backcourt of Paul and Booker is one of the best duos in the league, this year, they seem to have stepped up even more by making an impact in their own ways. Booker is in the top 5 shooting guards with his 23 points per game, which is on par for his career average in his seventh year. While scoring fewer points than earlier in his career, Chris Paul has put himself in the top echelon of all-time passers by moving into third on the all-time assists list. One player who has emerged for the Suns this year is forward Frank Kaminsky. Kaminsky is averaging 20.1 minutes a game and 10.6 points a game, which are both highs in his third year with the Suns. With both teams at full strength, the Suns have the better roster from top to bottom. Taking into consideration the Mavericks being without Doncic, who is their best scorer, this pushes the advantage Friday night even farther into Phoenix’s court.

The Dallas Mavericks run one of the slowest offenses in the league at 99.9 possessions per game. In their last three games, they’ve had even fewer possessions at 98.6. Without Doncic, the team was missing a noticeably large spark on offense Wednesday night. The dual center look of the Mavericks only saw noticeable production out of Porzingis last time out. Powell had one of two shots from the floor in 22 minutes, so I expect them to get him more looks, thus slowing down their offense even more. The Phoenix Suns are one of the faster-paced teams at 104.1 possessions a game. Chris Paul, at this point, is one of the best floor generals in NBA history as he creates space for other players. Wednesday night, the Suns had only a few more possessions than the Mavericks. We may see the Suns move at a quicker pace to avoid falling behind as they did last game, to give themselves more opportunities to score.

Coming into Friday’s game, the Mavericks are underdogs for a number of reasons. Being on the road, without Doncic and playing against one of the hottest teams in the league, Dallas has a tall task ahead of them to steal a road win.
While an outright win has the odds stacked against them, the Mavericks have found a way to keep games close against good teams as of late. Over their last five games, Dallas is 4-1 ATS and has covered the spread in their last three games. Friday features the same line as Wednesday, which sits at 8 points. Playing the same opponent on the road in back-to-back games is tough, but I see the necessary adjustments being made by Dallas to keep it close by avoiding a fourth-quarter collapse.

The Suns and Mavericks faced each other for the first time this season just two days ago. The Suns had a 37-point fourth quarter to complete the comeback and move their streak over Dallas to seven games. Phoenix has also won 14 of the last 17 matchups.

How the Public is Betting the Mavericks vs. Suns

66% are betting the Suns to cover the spread.

Friday’s game will be the second time these teams have faced one another in the past two days. The Mavericks led most of the way but had a defensive collapse as the Suns pulled away in the final minutes. Though the Suns are expected to move to 11 straight wins, the Mavericks had the Suns figured out for most of the last game and should make the right adjustments to avoid another blown lead. Take the Mavericks to cover. Did you know… That you don’t have to lay -110 odds on your bets anymore? Imagine how much money you’d have saved over the last year if you had bet your games at -105 odds! You’d have saved $5 for every $100 you tried to win! Make that thought a reality by taking five minutes to make the switch to BetAnySports Sportsbook! You’ll be so glad you did!