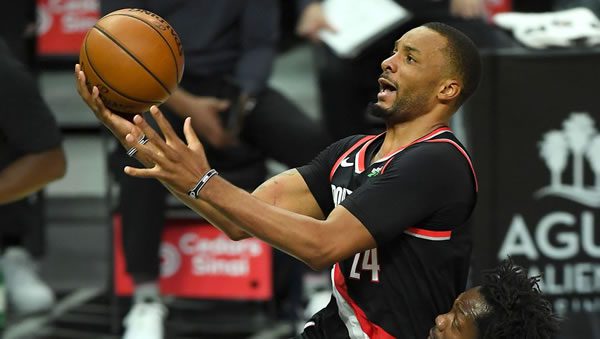 The Denver Nuggets started the 2021 season on a high with a 9-4 record through 13 games. Just last week, Denver was on a five-game winning streak but have since hit their first slump of the year, losing four straight and resulting in their 9-8 record. In fact, their last win came over the Trail Blazers nine days ago, which is the team they face Tuesday night. Nikola Jokic is having himself another MVP-caliber season, averaging 26.4 PPG, 13.6 rebounds a game, and also leads the team in assists and steals. At 9-8, the Nuggets are in the early mix of the Western Conference, as they are within one game of six teams. The Denver offense has struggled with just 102.6 PPG, but their defense has kept them in games, with the second-best scoring defense at 101.6 PPG.

The Portland Trail Blazers had a slow start to the season with a 3-5 record. With Damian Lillard finding the bottom of the basket, the Trail Blazers got back above .500 to a 9-8 record. Portland heads into Tuesday on a three-game win streak and winners of four of their last five games. Ironically enough, as the Nuggets last win came over the Trail Blazers, so Portland’s last loss in the past two weeks came to Denver. Though Lillard leads the team with 21.6 PPG, the team as a whole has elevated their game with five players averaging double-digit points a game. The Portland offense finds itself in the top 10 of the league with 109.9 PPG. Defensively they mirror the offense, giving up 109.2 PPG.

A Gold Nugget of Injuries

As the Nuggets find themselves in a four-game skid, they will have to rely on their bench for the near future to turn the ship around. Denver has been hit with some injuries to key players as they still await the return of their star guard, Jamal Murray, who is still rehabbing a torn ACL from last year. In addition to Murray, the team will be without young prodigy Bones Hyland. Hyland doesn’t see the floor a lot at 15.4 minutes a game but is productive when he is at 7.2 points a game and has quickly become a fan favorite. The Nuggets will also be without Michael Porter Jr. and, most importantly, Nikola Jokic, who is questionable to take the floor Tuesday with a wrist injury. With the lack of offense this season at 102.6 PPG, losing these players for any amount of time could turn their losing streak into a lengthy one if other players fail to step up. To make matters worse, the team will face eight of their next nine games on the road. Given that Portland has no injuries to report for their team and is playing at home against an injury-ridden Nuggets team, the advantage lies with Portland for this one.

After a slow start to the 2021 season, Damian Lillard seems to have knocked the rust completely off and has helped lead his team back to a winning record. At 21.6 PPG, Dame finds himself back among the top 5 point guards scoring this season. In his last game, Lillard dropped a season-high 39 points and has scored 20+ in seven straight games. Though he is known for his range and scoring ability, Lillard has been getting the ball to other playmakers, averaging 8.1 assists per game, which is the fifth-best in the NBA. With Dame finding his groove the last handful of games and facing a team with missing pieces, including one of the top defensive centers in the league, look for him to continue his hot streak and move the Blazers to four straight wins.

The Trail Blazers have turned around their season to become one of the hotter teams in the league and are one of the toughest teams at home. Portland is 8-1 at home to start the year versus their 1-7 road record. Playing at Moda Center, the Trail Blazers average 116.1 PPG and have an 11.2-point differential. On top of Portland’s impressive homestand, the Nuggets have seen little success on the road with a 2-5 record. Home court advantage is always taken into consideration in any game, but the Trail Blazers are making it look like more and more of a tougher place to come in and win as the year goes on.

Tuesday night’s game will be the second time these teams have played this season, both of which are in the last nine days. In the last outing, the Nuggets won 124-95. In that game, the Trail Blazers were without Lillard. Dating back to the 19-20 season, the Nuggets have won six of the last eight matchups.

How the Public is Betting the Nuggets vs. Trail Blazers

74% are betting the Trail Blazers to cover the spread.

The Denver Nuggets are 5-1 ATS in their last six games against Portland.

This game features two teams who are on different streaks. The Nuggets come into a tough Moda Center without key players and will look to try and keep up with the Portland offense who has been lights out at home. Though there is a chance Jokic plays as he is listed as “questionable,” I believe his presence wouldn’t be enough to keep it close, especially if he isn’t 100%. Take the Trail Blazers to cover the 5.5-point spread. Also worth noting is this game is the Over/Under. At 212.5 points, the odds are taking into consideration the Denver defense and their lack of scoring this season. I still think the over has a shot with Portland’s stellar offense and the fact that they give up 109.2 PPG defensively. Take the over on 212.5 total this game as well. Question: Did you know that you could be betting on games at -105 odds instead of -110? Making the switch will save you hundreds of dollars per season and THOUSANDS of dollars over the years! Why risk more when you could be paying LESS? Be smart! Start saving BIG money at BetAnySports Sportsbook TODAY!