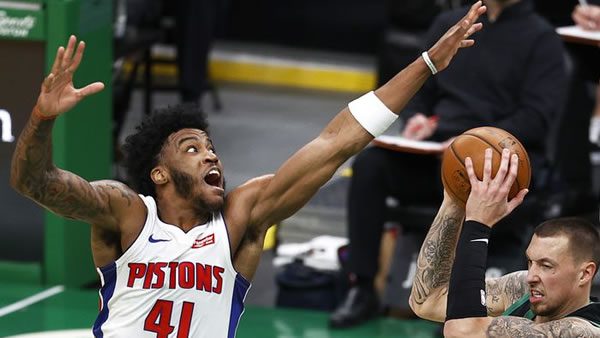 Point Spread: DET +1.5/HOU -1.5 (Opened at -1.5 at Bovada - Have you seen their live betting platform? It’s freakin’ incredible! Most sportsbooks only offer live betting during commercials and and halftime. They have a line up the whole game! Even with fat leads!)

The Detroit Pistons head into Houston Wednesday with one win on the season and eight losses. The Pistons lone win came over the Orlando Magic. The Pistons last time on the court saw their closest chance at a second win slip away against the Brooklyn Nets in a 96-90 final. Detroit made a late run in the game, but the Nets 39-point quarter proved to be too much to come back from. Jeremi Grant currently leads the team scoring with 16.6 PPG. As an offense, the Pistons find themselves last in the NBA with 94.9 PPG. Defensively, Detroit sits middle of the pack giving up 107.2 PPG. The team’s -12.3-points differential also is the worst in the league.

The Houston Rockets have the NBA’s worst record with one win and nine losses in their first ten games. The Rockets only win came over the Oklahoma City Thunder 124-91 back in the first week of the season. After an October to forget, the Rockets took the Lakers and Nuggets to the ropes in one-possession losses. Center Christian Wood leads the team, averaging 17.5 PPG. The Rockets offense, which is 24th in the league, averages 103.8 PPG. On defense, they give up 111.2 PPG, giving them a -7.4-point differential.

Detroit has started their 2021 campaign picking up where they left off last season in their 1-8 start. The Pistons find themselves at the bottom of the league when it comes to scoring, averaging just 94.9 PPG. This scoring slump is due to their young squad still trying to establish themselves in the league. Number one overall pick, Cade Cunningham, had an underwhelming NBA debut with two points and is averaging just 10.8 points in four games played. Aside from Jeremi Grant, the Pistons haven’t had a player average 20 points in a season since Blake Griffin’s 2018 season. Eventually, the Pistons may turn things around with some more draft picks or by trading for someone, but in the meantime, the Pistons don’t have a standout player who can take over a game offensively. Detroit is coming off four days’ rest into Wednesday night’s game, so the Rockets will be able to work on their offense without worrying about trying to match the Pistons scoring, who may have a slow start to the game.

In this matchup between two of the bottom teams in the league, the team that can get themselves more looks by playing faster could be the edge needed to get the win. The Houston Rockets are the sixth-ranked team for pace averaging 105.7 possessions a game. The Rockets are a team that runs their offense through their big man Christian Wood who leads the team scoring. When getting the ball in his hands early in the shot clock, he wastes no time getting to the basket. The Pistons find themselves in the bottom handful of teams playing a slower-paced game averaging 101.4 possessions. Given that the Pistons again are the lowest-scoring team in the league, having a slow pace and giving themselves fewer possessions to score is a recipe for disaster in the long run. Since Houston does play faster, we may see Detroit get more possessions than their average, but since they don’t have an established scorer on the squad, the extra possessions may be all for naught.

Houston’s Rebuild a Step Ahead

As mentioned, these two teams are currently in a rebuild, but one squad is seeing dividends faster than the other, and that’s the Houston Rockets. Two players the Rockets are leaning on that are delivering are Kevin Porter Jr., who is in his second year with the team, and Jalen Green, who was the #2 overall pick in the 2021 draft and stepped immediately into a starting role. Green and Porter Jr. are third and fourth on the team for scoring, respectively. Again, on the Pistons side, Cade Cunningham hasn’t delivered for his team quite like Jalen Green, starting in just four of nine possible games. Look for the Rockets to build some confidence in their young squad Wednesday against the Pistons.

More Picks: Ball State at NIU Pick Against the Spread

Last season, the Pistons and Rockets met twice and split both games. In those games, the road team got the win. Last year’s Rockets team featured John Wall and Victor Oladipo in those games, and now both players aren’t with the team. The Pistons squad is essentially the same with the addition of Cade Cunningham.

How the Public is Betting the Detroit Pistons vs. Houston Rockets

73% are betting the Houston Rockets to cover the spread.

This Wednesday night matchup features two teams desperate to get their second win on the year. The 1.5-point spread proves that this game can go either way as it heavily relies on young players to lead the way. The stats and trends in favor of the Rockets, along with their home-court advantage for the night, have me rolling with them. Take the Houston Rockets to cover the 1.5-point spread. Given the inability of either team to get rolling offensively, we could see a low-scoring affair. With Kevin Porter Jr. a game-time-decision and a big part of the Rockets offense, if he doesn’t play, take the under on the 210.5 total. Note: Don’t forget to check out our Week 10 NFL picks!