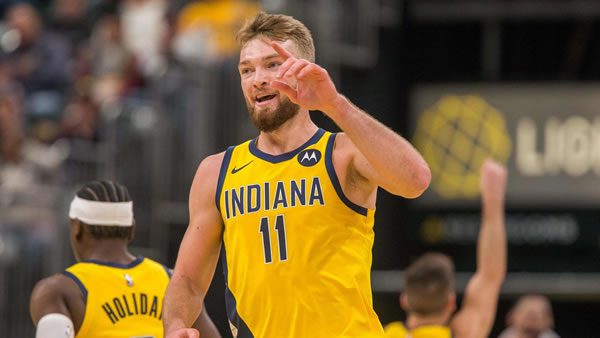 For bettors, taking the Golden State Warriors to cover the spread has been a winning bet as they cover in 68.00% of their games. Their season-long plus-minus against the spread is 5.7.

On offense, the team’s leading scorer is PG Stephen Curry. So far, he is averaging 27.08 points per game, placing him first among point guards. Curry is also the team’s best three-point shooter, connecting on 5.4 shots from downtown per game. Draymond Green has been in charge of cleaning up the glass, hauling in 7.88 boards per game.

The Indiana Pacers enter today’s game, having won 3 straight games. In their past ten contests, the Pacers’ have picked up five wins. As they get set to host the Warriors, Indiana has a positive home plus-minus of 4.3 points. Overall the Pacers are ranked 10th among NBA teams with an even point differential. This mark has come while playing the 12th toughest schedule.

For bettors, taking the Pacers to cover the spread has been a winning bet as they are covering in 51.90% of their games. Their season-long plus-minus against the spread is 1.3.

On offense, the team’s leading scorer is SG Malcolm Brogdon. So far, Brogdon is averaging 19.91 points per game. Justin Holiday has been the team’s leading three-point shooter, connecting on 2.39 shots from downtown per game, while Domantas Sabonis has been in charge of cleaning up the glass at 11.89 boards per game.

Heading into this game, the Indiana Pacers are the 23rd ranked team in possessions per game. Through 28 games, the team ranks just 19th in attempted three-point shots per contest. So far, they have also struggled to generate free-throw attempts, ranking 27th. On the other side, Golden State prefers to get up and down the court, ranking 7th in the NBA. With their increased number of looks, the unit sits second in the league in three-point attempts.

The key matchup to watch in this game will be how Indiana responds to a team looking to hoist as many threes as possible. So far, the Pacers have given up the second-fewest three-point attempts. On the year, teams have preferred to work the ball inside, where Indiana tends to foul and send opponents to the line. Look for the Pacers to struggle on offense against the league’s number one rated defense. So far, Golden State opponents are hitting just 32% of their three-point attempts.

Tonight’s matchup between the Warriors and Pacers will be their first meeting of the season. Last year, both teams won on each other’s home court. Indiana had the largest margin of victory, defeating Golden State by 9 points.

How the Public is Betting the Warriors vs. Pacers

64% are betting the Warriors against the spread.

In this game, look for Golden State to impose its will by getting up and down the court, forcing Indiana to play an unfamiliar style. Throughout the year, the Pacers have found the most success by slowing the game down and attacking the basket. If they are going to pull off the upset, they will have to match the Warriors’ offensive firepower. I don’t see this happening in tonight’s matchup and recommend taking Golden State to win and cover the spread.

Even though I see the Pacers falling short, I still like Domantas Sabonis and his outlook of reaching a double-double. Throughout the season, the Indiana big man has consistently reached 20 points and ten rebounds. Look for this to happen again tonight.