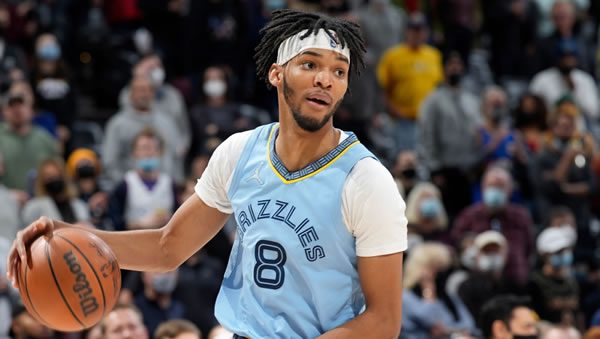 The Minnesota Timberwolves host the Memphis Grizzlies in a Non-Conference matchup. Tip-off is set for 07:30 PM ET at the Target Center.

The Memphis Grizzlies come into this game with an overall record of 56-26, placing them 2nd in the Western Conference. So far, Memphis is above .500 on the road, holding a record of 26-15. Over the Grizzlies’ last five games, they have picked up just 2 wins. During this stretch, Memphis is averaging 120.0 points per game, 4.0 points more than their season average of 115.7. This uptick in offensive play has come while playing a group of opponents who are collectively giving up 110.0 points per contest. A key reason for Memphis’ recent struggles is a defensive unit giving up 120.0 points over their previous five contests. This figure is up from their season average of 110.0. In the Memphis Grizzlies’ most recent game, Memphis took down Minnesota by a score of 124-96

The Minnesota Timberwolves come into this game with an overall record of 46-36, placing them 7th in the Western Conference. So far, Minnesota is above .500 at home, holding a record of 27-15. The Timberwolves have played well over their last five games, picking up 3 wins. In this stretch, Minnesota’s offense is scoring right in line with their season average, putting up 116.0 points per game. Combined, the Timberwolves’ last five opponents are giving up 111.0 points per contest. Even though the Timberwolves have been adding to the win column, their opponents have had no trouble scoring the ball, averaging 118.0 points per game, up from Minnesota’s usual rate of 113.4. In the Minnesota Timberwolves’ most recent game, the team fell to Memphis by a score of 124-96.

As Memphis travels to take on the Minnesota Timberwolves, the Grizzlies’ leading scorer is Ja Morant. Through 57 games, Morant is averaging 27 points. On the season, he has surpassed his season average in 49.0% of his games. Against the Timberwolves, Morant will need to be on top of his game as Minnesota is allowing their opponent’s top scorer to surpass their average in 46.0% of their games, placing them in the top 10. On the other side, Karl-Anthony Towns leads the Timberwolves in scoring, averaging 24 points across his 77 games. Throughout the season, Towns has outscored his season average in 49.0% of his outings. Given that Memphis’s defense has struggled to slow down their opponent’s top scorers, Karl-Anthony Towns should be in line for a big performance. So far, the Grizzlies have allowed their opponent’s top scorer to surpass their season average in 51.43% of their games, giving them a rank of 20th among NBA defenses.

Heading into this matchup, the Memphis Grizzlies are the more efficient team on both ends of the court. This scenario has taken place in 31 of Memphis’s 41 games, leading to a winning percentage of 71%. So far, the Minnesota Timberwolves have played 47 games as the inferior offensive and defensive unit. In these instances, they have lost 47 times, by an average margin of -12.0 points.

Heading into today’s matchup, the Memphis Grizzlies and Minnesota Timberwolves have met up for 6 games. In their last meeting, Memphis picked up a 124-96 win.

67% are betting the Grizzlies against the spread.
52% are wagering on the game to go over the posted total of OFF

The series between the Memphis Grizzlies and Minnesota Timberwolves heads north to Minnesota all tied up at 1-1. Despite being blown out in game 2, the Wolves have to feel good about stealing a game on the road and shifting the home-court advantage in their favor. On the other side, the Grizzlies dominated game 2, following the same blueprint they have used all season long, working the ball inside and playing quality defense. In the matchup, Memphis scored 60 points in the paint compared to just 28 for Minnesota. From downtown, the Grizzlies hit just 32% of their shots but held the Wolves to 28.9% shooting from deep. With the spread sitting 1.5 points in favor of Memphis, I expect the Grizzlies to pick up the road win and cover the spread. Bet your Grizzlies/Timberwolves prediction and ALL your NBA bets for free this week by taking advantage of a 100% real cash bonus on your first deposit up to $500 at Betnow Sportsbook! (Must use bonus code PREDICTEM when signing up.)