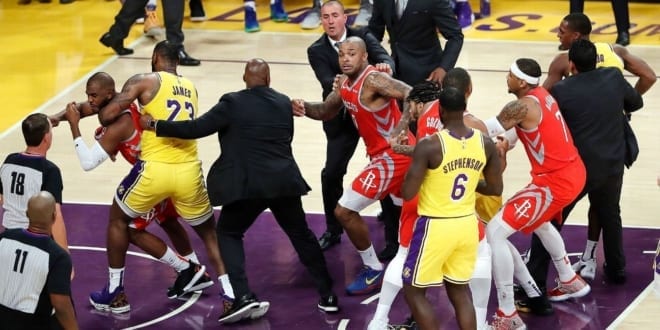 Takeaways From Houston and Los Angeles’ Most Recent Games

The Rockets last took the court on February 13th on the road at the Minnesota Timberwolves and headed into the All-Star break with a loss as they were defeated 121-111 by the T-Wolves despite closing as a four-point favorite.

The Lakers are looking to re-group as they headed into the All-Star Break on a nasty skid losing four of the last five games overall. Most recently, the Lakers were defeated on the road in the ATL when they were upset as a 5.5-point favorite by the Atlanta Hawks on February 12th. The final score resulted in Atlanta winning 117-113 over the Lakers.

How the Public is Betting the Houston and Los Angeles Game

68% of the consensus like the Rockets as the slight road favorite. As a result of the initial lean on Houston as a two-point underdog at the open at most sites, we have seen action by the public propel this market upward by half of a point to land the Rockets in its current position as a 2.5-point favorite.

The Lakers were hosted by the Rockets in the Toyota Center in January and nearly pulled an upset as a seven-point underdog. Overtime was required to declare a winner. The final score resulted in Los Angeles falling to Houston by a tally of 138-134.

Heading into this contest both teams will enter relatively good health with no prevalent injury concerns to key personnel.

Both teams enter into this Western Conference collision well-rested as this will be both teams’ first match back since the All-Star break. Houston is beginning a two-game road trip that concludes on Saturday in Oakland against Golden State while the Lakers will be on the road for two-games starting Saturday after they host the Rockets. The Lakers have not been on a significant road trip since early Feb which included that Celtics 1 point win in a nailbiter.

Can Harden Lead The Rockets To Victory?

A central narrative surrounding this game is the potential history in the making as James Harden is now looking at extending his 30-point game streak to 32 games which would place him second all-time ahead of legend Wilt Chamberlain. On paper, the Lakers should offer the Rockets plenty of opportunities to score as they sit 22nd in the league in scoring defense (113.4 points per game). Moreover, a great concern for the Lakers is their ability to give away free points while showing an inability to take advantage of free throws. The Lakers sit dead-last in the NBA in both free throw percentage (68.7%) and opponent success rate from the free-throw line as their counterparts hit 78.7% of their attempts.

The Lakers own a significant edge that can help them get a win in a contest forecasted to be settled by a basket: their bench play. The Lakers bench produces 35.9 points per game which is 9.4 points greater than Houston’s 26.5 bench points per match. Another factor effecting this game is home court advantage. Previous to their loss in Minneapolis on February 13th, the Rockets had actually begun to fare well on the road as they went 4-1 SU in their last five away games. However, the Minnesota loss lowered Houston’s road record to 13-15 SU on the season. The question remains now as to whether or not Clutch City will suffer another let-down in one of the NBA’s most animated environments against a Lakers team that stands 16-12 SU at home this season.

There are several key trends worth keeping an eye on in this contest. First and most notably, the Rockets have won the last five games overall between these two opponents. Overall, Houston has been profitable against the Lakers as well as they have gone 14-6 ATS in the last twenty meetings. For Over/Under players, the Over is 23-9 ATS in the previous 32 contests.

The Rockets have gone 3-4 SU in games settled by three points or less this season. Contrarily, the Lakers are 5-2 SU in games settled by a three-pointer or less. This narrative in itself warrants a play on the Lakers here as the game is forecasted to be settled by a bucket. However, with the spectacle that surrounds James Harden’s dance with history the public will be inclined to dismiss this narrative and back the Rockets who will be a public favorite by virtue of this storyline. Nevertheless, Harden went for 42 points against the Timberwolves in the Rockets’ last game and Houston still came up on the losing end by double-digits no less even when they were favored to win. A similar situation will occur here as the Lakers will bounce back from their skid with authority and defeat the Rockets handily.