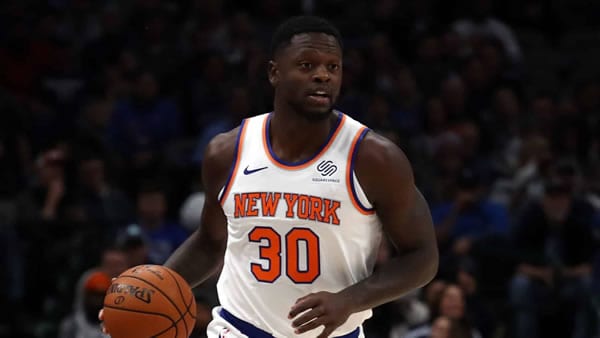 Find the best parlay payouts >>> Not all books pay the same!

The New York Knicks come into tonight’s game with two straight losses. Despite this recent skid, they have an overall record of 5-3. This mark has come while playing the 26th toughest schedule.

So far, bettors have yet to find an edge when wagering on the Knicks. On the season, they have covered the spread in 50% of their contests. Their plus-minus against the spread has been -2 points per game.

Offensively, Julius Randle is the team’s leading scorer. So far, he is averaging 20.6 points per game. Evan Fournier has been New York’s best three-point shooter. In his first season with the team, Fournier has knocked down 3.25 shots from downtown per game.

The Milwaukee Bucks are off to a sluggish start to the season with a record of 4-4. So far, they are not taking advantage of playing at home, going 1-3. Their plus-minus at the Fiserv Forum is -.8 points per game.

Through eight games, Milwaukee has played the 10th toughest schedule in the NBA. Their overall point differential is +5.7 points per game.

On the season, the Bucks have been a 50/50 bet to cover the spread. Against the spread, they have a negative plus-minus rating at -2.

To no one’s surprise, Giannis Antetokounpmo is the team’s leading scorer, averaging 27.38 points per game. The Finals MVP is also Milwaukee’s best rebounder, hauling in 10.75 boards per game.

Grayson Allen has been the most productive shooter from long range, averaging 3.12 made three-pointers per game.

A key aspect of this game to watch will be how the Bucks respond to the Knicks ‘ slow style of play. On average, when playing slow-paced teams, the Bucks win 57% of their games.

On the opposite end, when the Knicks play fast-paced teams, they hold opponents to 5 possessions below the league average. New York wins these games 73% of the time.

Who Has The Defensive Edge?

In terms of offensive efficiency, the Bucks are the superior unit. When the Knicks face the challenge of stopping good offensive units, these teams average 3 points above expectation. New York wins at a rate of 43% with a MOV of -3 points per game.

Although the Knicks are one of the least efficient offensive teams in the NBA, Milwaukee tends to play down to such competition, giving up 3 points per game above the league average.

Offensively, the Bucks should not be bothered by New York’s top 10 defense, as they outscore the league average by 9 points per game against such competition.

The Knicks also play well vs. good defenses, scoring 4 points per game above expectation. However, they win just 38% of the time.

More Picks: Get Collin’s Side and Total Bets on the New Orleans at Golden State Game >>>

Last season, the Bucks and Knicks met up for three games, with New York winning the series 2-1. Combined, Milwaukee actually outscored New York 340-333. However, most of this differential came because of their 134-101 victory in game 2.

54% are betting the Knicks against the spread.

I see the Knicks combing into this game, looking to prove they belong among the top teams in the NBA. The Bucks are facing injuries and are dealing with Khris Middleton’s absence for COVID 19.

I recommend taking the Knicks to cover the current spread of +5. If this number drops down to +3, I would instead take Milwaukee.

My favorite player prop bet is to take Evan Fournier to surpass his over-under line of 13.5. The Bucks defense tends to give up open three-pointers. I can easily see Fournier knocking down 3+ three-pointers on his way to a big game. Question: Where do you bet on NBA games? Have you ever checked out Bovada Sportsbook? They offer live lines during the whole game (not just commercials), can get your credit card to work for deposits, offer rebates on ALL your bets; win, lose or draw AND offer the fastest payouts! Check’em out!