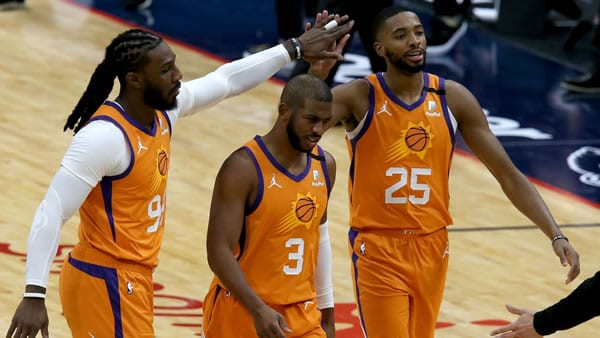 The Bucks and Suns joined the NBA together as expansion teams back in 1968, and over the 50-plus seasons since then, they own just one NBA championship between them. But that number will become two this season, as Milwaukee and Phoenix meet in the NBA Finals, beginning with Game 1 Tuesday night in Arizona. One key injury might make a big difference in this series, with Bucks forward Giannis Antetokounmpo iffy with a tweaked knee. Then again, Milwaukee played very well without him in finishing off Atlanta in the Eastern Conference finals. Basketball bookmakers installed the Suns as -185 favorites to win this series, with Milwaukee getting around +165 as the underdog. Here’s how we home-worked Game 1 with our free NBA Finals betting pick.

The NBA playoffs betting market opened Phoenix as a six-point favorite for Game 1, with an over/under of 217. Both those figures were holding steady in the early betting action.

For those just looking to bet the winner of this game outright, the Suns could be found giving -245 at Bookmaker, with Milwaukee getting +215 at BetAnySports.

Milwaukee reached the NBA Finals for the first time since 1974 by beating Atlanta in six games in the Eastern Conference finals, finishing off the Hawks with a 118-107 Game 6 victory on the road Saturday night. That series was tied at two games apiece, but the Bucks won the last two games without the Freak, getting great performances by the supporting cast.

Phoenix, meanwhile, reached the NBA Finals for the first time since 1993 by beating the Clippers in six games in the Western Conference finals, finishing off that series with a 130-103 Game 6 victory last Wednesday in Los Angeles. The Suns won the first two games of that series at home and led 3-1 after four games, on their way toward advancing.

The big question going into this series is the availability of Milwaukee’s Antetokounmpo, who injured a knee in Game 4 against Atlanta and missed Games 5 and 6. But the Bucks won both those games, although we should point out Hawks G Trae Young also missed Game 5 with a bad foot and was obviously hobbled in Game 6.

Including the regular season, Milwaukee is 8-6 SU, 7-7 ATS without the Freak this year.

Antetokounmpo is listed as questionable for Tuesday night, and our guess is he will not play.

Phoenix played five games better than the Bucks during the regular season, 51-21 to 46-26, and swept the season series from Milwaukee two games to none, winning both games by one point. First, back in February, the Suns beat the Bucks 125-124 in Phoenix on a missed Milwaukee shot at the buzzer. Then in April, the Suns won in Milwaukee 128-127 in overtime.

Antetokounmpo scored 47 and 33 points in those two games.

That first match-up played well over its total of 229, while that second match-up was a push of a total of 232 through regulation, tied at 116, then played over in OT.

Phoenix shot 50 percent from the floor in those two games combined, the Bucks 49 percent. And the Suns held a slim 92-90 edge on the boards.

Unders are 10-6 in Bucks games this postseason.

Unders are 9-6 in Suns games this postseason.

Game 1 comes down to how good the Bucks are without the Freak. And actually, they’re not too bad. They played very well in those two games without him against Atlanta, a good team game, with four guys throwing it in the hole and five guys playing good defense. Can the Bucks win this series without Giannis? Probably not. Phoenix is the better team here, regardless, and our pick to win the title. But can
Milwaukee, take a couple of games and maybe even keep this one close? We believe so. We’re betting the Bucks plus the points here for our free NBA Finals pick for Game 1. Bet your NBA Finals picks for free by scoring a giant 100% real cash bonus on your first deposit up to $1000 at BetNow Sportsbook!