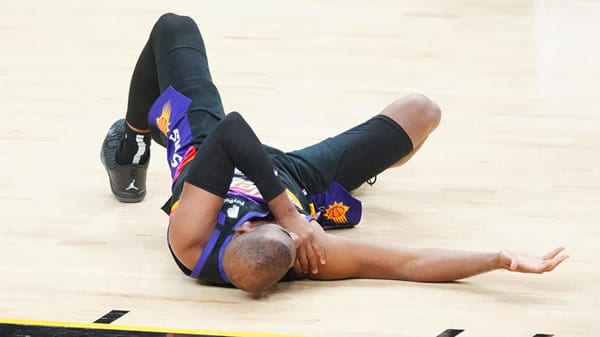 Point spread: Phx +7/LAL -7 (Intertops - The place to bet if you want safety/security and KNOW you’re gonna get paid! They’re the oldest book on the web; online since the 90’s!)

After splitting the first two games of this best-of-seven Western Conference affair in Phoenix, the Lakers and Suns meet for a big Game 3 Thursday night in Los Angeles. The Suns took Game 1 Sunday, but the Lakers won Game 2 Tuesday. So LA now owns the home-court advantage for this series. The Lakers began this series as -165 favorites to win it; they’re currently listed at -355, with Phoenix getting +275. Might some value on that bet reside with the Suns? And how are we playing this Game 3 for our free NBA pick of the day?

Most of the basketball playoffs betting market opened Los Angeles as a 6.5-point favorite for this Game 3, with an over/under of right around 210.5. Early betting action then bumped LA to -7.

Any bettors out there thinking Phoenix might win this game outright could get +260 on the NBA money line at the Westgate Sportsbook in Las Vegas.

Phoenix took the opener of this series at home last Sunday 99-90, but Los Angeles took Game 2 Tuesday night 109-102. The Lakers led almost the whole game Tuesday and 79-72 through three quarters before the Suns used a 13-5 run to go up 88-86 midway through the fourth. But LA then used a 7-0 run to lead 100-92 with two minutes left and hung on from there for the victory and the cover as a two-point favorite.

Also, Game 2 pushed its post-time total of 211 when the teams combined to go 10/10 from the free-throw line in the last 14 seconds.

Phoenix outshot the Lakers from the floor Tuesday 47 percent to 45 percent. But Los Angeles out-rebounded the Suns 39-31 and won the turnover battle 13-9.

Phoenix won Game 1 of this series by shooting 47 percent from the floor and out-rebounding the Lakers 47-33.

The Suns finished nine games ahead of Los Angeles in the regular-season standings, 51-21 to 42-30. Phoenix also took the season series from the Lakers this year two games to one.

On the injury front, both Phoenix G Chris Paul (shoulder) and LA’s LeBron James (ankle) are visibly ailing, and while they’ll probably play Thursday night, we’re not sure just how effective either of them will be, which makes betting on this game a little dangerous.

The line on this game mainly reflects the uncertainty surrounding Paul’s health. If he can play and play effectively, Phoenix might win this game outright. But even if he can’t go, or he’s hampered, the Suns are still a pretty good team. They came back on Los Angeles in Game 2 basically without Paul, and we believe they can keep this Game 3 close, too. We like Phoenix here, getting points we might not even need. Bet your pick for FREE by scoring a 100% real cash bonus on your first deposit of $100 to $300 at MyBookie Sportsbook! (Must use bonus code PREDICT100).