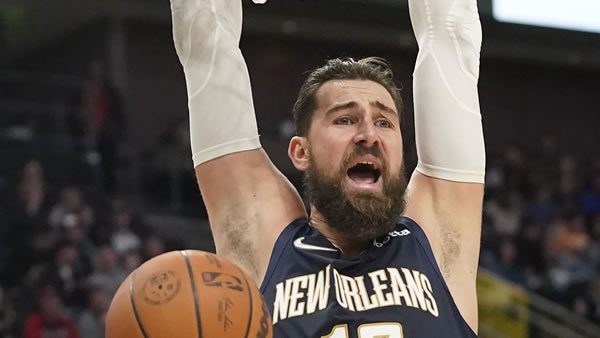 Point Spread: SA +8/ NO -8 (Did you know that you could be wagering on games at -105 odds instead of the spendier -110 option that you’re paying? Making the switch to reduced juice betting will save you THOUSANDS of dollars over time! Find this killer offer at BetAnySports!)

In their upcoming game, San Antonio will be looking to capitalize on their recent win over the Rockets. Devin Vassell led the way for the Spurs with 26 points. Despite being 4-point underdogs on the spread, the Spurs were able to secure an ATS win.

Heading into the game, New Orleans is 18-12 overall. When playing at home, New Orleans has a mark of 12-4 and a win percentage of 75%. Currently, the team is 3rd in the Western Conference. So far, they are 15-15-0 vs. the spread. The Pelicans need a win in today’s matchup vs. San Antonio to avoid their 5th straight loss.

New Orleans most recently lost to the Bucks by a score of 128-119. The team high 37 points from Jonas Valanciunas were not enough to come home with the win.

In the most recent matchup between the two teams, the Pelicans picked up the 129-110 win over the Spurs. The Pelicans’ margin of victory was enough to cover the spread as a 5.5-point favorite. So far this season, the Pelicans have a record of 2-0 vs. the Spurs. The Pelicans have had the better record vs. the spread over the last five games, going 4-1. The team’s average scoring margin in these contests sits at 15 points per game. In these contests, they averaged a combined 219 points per game, leading to an over-under mark of 1-4.

For the season, San Antonio is averaging just 110.3 points per game, which is 26th in the league. This below-average production has come despite being one of the faster-paced teams in the NBA (12th). When looking at the team’s 3-point shooting numbers, they profile as an average team in both percentage and attempts. For the season, the Spurs’ offense is ranked 15th in 3-point attempts per game while connecting at a rate of 34.6%. The defense has been a struggle for San Antonio, as they are currently allowing 113.04 points per game. In terms of their 3-point defense, opposing teams have hit 35.84% of their looks from deep, placing the Spurs 20th in the NBA.

As the Spurs prepare to face the Pelicans, it is unlikely that Keldon Johnson, the team’s leading scorer at 21.1 points per game, will be available. This means that Devin Vassell, who is averaging 20 per night, will likely have an increased role on offense.

This season, New Orleans is among the league leaders in scoring, averaging 117.3 points per game. So far, the Pelicans are also one of the more up-tempo teams in the league, sitting at 100.9 possessions per game. New Orleans heads into the game as one of the top 3-point shooting teams in terms of percentage. So far, they have hit 36.7% of their looks from deep. However, they are currently ranked just 27th in 3-point attempts per contest. On defense, the Pelicans allow an average of 110.28 points per game, placing them 13th in the league. So far, teams have shot 36.48% on their looks from outside vs. New Orleans. This figure places them 26th in 3-point shooting defense.

An important injury to consider for today’s game is that New Orleans will be without Zion Williamson, who is listed as out on the injury report. CJ McCollum will assume the role of primary scorer for the team. This season, McCollum has been averaging 18.7 points per game for the Pelicans.

More Picks: Get our analysis and betting recommendation for the Washington at Utah 12/22/22

The Spurs have been playing better basketball as of late and are 4-2 in their last six games. The Pels have dropped four straight games and will be missing Zion Williamson tonight. There’s good betting value with the Spurs at +8.5. Bet your NBA picks for FREE this week by scoring a 50% real cash bonus up to $250 at the web’s best sportsbook —> Bovada! They also have a sweet player rewards program and the best live betting platform on the planet!