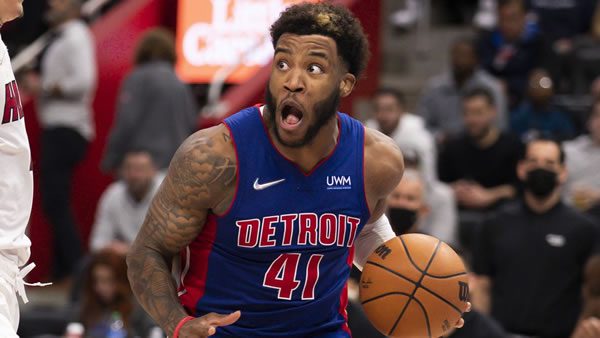 Heading into the game, Minnesota is 20-21 overall. When taking to the road, Minnesota has a mark of 8-12 and a win percentage of 40%. Currently, the team is 9th in the Western Conference. So far, they are 18-23-0 vs. the spread. In their matchup against Detroit, the Minnesota Timberwolves have won 4 straight games and will look to push that mark to 5 in a row.

In their last game, Minnesota defeated the Rockets (104-96) as 3-point favorites. D’Angelo Russell led the team with 22 points on 46.2% shooting. The Timberwolves also covered the spread with the victory.

Heading into the game, Detroit is 11-33 overall. When playing at home, Detroit has a mark of 5-14 and a win percentage of 26%. Currently, the team is 15th in the Eastern Conference. So far, they are 20-23-1 vs. the spread. The Pistons need a win in today’s matchup vs. Minnesota to avoid their 4th straight loss.

In their last game, Detroit was defeated by the 76ers with a score of 147-116. Despite Saddiq Bey scoring 17 points, the team was unable to come out on top. Going into the game, the Pistons were 14-point favorites.

In the most recent matchup between the two teams, the Pistons picked up the 116-104 win over the Timberwolves. Heading into the game, Detroit was the 7-point underdogs, giving them an ATS win. This has been the only matchup between the two teams this season. The ATS record across the previous five head-to-head meetings is 4-1 in favor of the Timberwolves. In these matchups, Minnesota has averaged 116 points per game while allowing 107. A combined average of 223 points per game was achieved in these matchups, leading to an over-under mark of 1-4.

This season, the Timberwolves have loved to get up and down the court, as they are currently 9th in the league in possessions per game. However, this has not fully translated into the offensive success they are looking for, as Minnesota is 13th in scoring at 114.7 points per game. Minnesota’s 3-point shooting numbers are below the league average, as they have hit just 34.3% of their looks from deep. On average, the team gets up 32.3 3-point shots per game, placing them 20th in the NBA. The defense has not been a strong point for Minnesota, as they are currently allowing 113.3 points per game. However, even with their overall struggles, the team has done a good job defending the 3-point line. So far, opposing teams have hit just 34.89% of their looks from deep.

Heading into the game, Anthony Edwards is listed as questionable on the injury report. This season, he leads the team with a per-game scoring average of 23.7. Currently, D’Angelo Russell is 2nd on the team in scoring with 17.1 points per game.

Coming into the game, Detroit’s offense is ranked just 24th in scoring at 111.8 points per game. This has come while being the 14th-ranked unit in pace. So far, the Pistons are averaging 100.1 possessions per contest. When looking at the team’s 3-point shooting numbers, they profile as an average team in both percentage and attempts. For the season, the Pistons’ offense is ranked 18th in 3-point attempts per game while connecting at a rate of 35.5%. Defense has been a struggle for Detroit, as they are currently allowing 112.55 points per game. The team’s 3-point shooting defense has been a problem this year. So far, opposing offenses have hit 36.41% of their looks from outside.

Heading into the game, Bojan Bogdanovic is listed as questionable on the injury report. This season, he leads the team with a per-game scoring average of 21.0. Currently, Jaden Ivey is 2nd on the team in scoring at 15.0 points per game.

More Picks: Get our Milwaukee at Atlanta analysis and pick for 1/11/23

The Pistons have gotten SMOKED by double digits in four out of their last five games. Minnesota has come out of nowhere to start playing better defense and has won four games in a row, with each game having a winning margin of seven points or more. I’m laying the points with the TWolves!