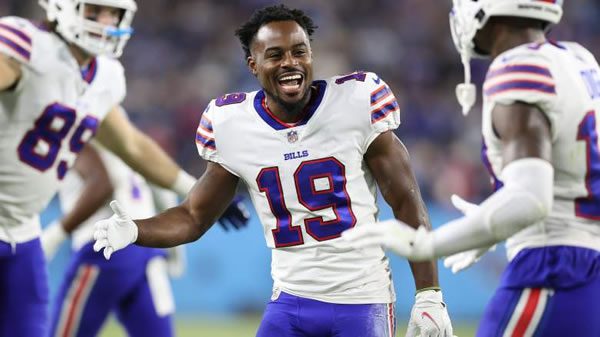 Atlanta Falcons (7-8 SU, 6-9 ATS) at Buffalo Bills (9-6, 8-6-1), 1/2/22 When: 1 pm ET Sunday, Jan. 2 Where: Highmark Stadium TV: Fox Point Spread: Buff -14.5 (BetOnline - One of the biggest and BEST sportsbooks on the web!) Total: 45 After regaining the lead in the AFC East, the Bills look to close things out with a couple more victories, beginning with an inter-conference bout with Atlanta Sunday afternoon in Buffalo. The Bills are coming off a big rivalry win over New England last week while the Falcons stayed alive with a win over Detroit. But one of these teams has a much better chance of making the playoffs than the other. Buffalo is lined as a double-digit favorite for Sunday; how are we playing this game with our free NFL betting pick?

The Week 17 NFL betting odds opened Buffalo as a 13.5-point home favorite for this game, with an over/under of right around 44. Early betting action then bumped the Bills to -14.5, and that total to 45. According to Sagarin’s ratings at USAToday.com, Buffalo should only be favored by 12 points for this game.

Atlanta is 3-2 SU over its last five games after defeating Detroit last Sunday 20-16. That game was tied at 13-13 into the fourth quarter when the Falcons drove 71 yards to a touchdown to take the lead for good. Near the end, Atlanta allowed the Lions to reach the 10-yard line but sealed the deal with an interception. However, the Falcons came up a score short against the spread at -7.5. Atlanta actually got out-gained by Detroit 338-254, out-rushed 130-47, and lost time of possession by a huge 38-22 split. So it’s almost a wonder how they won the game. The Falcons have now been out-gained by each of their last ten opponents! At 7-8 overall, Atlanta sits in the No. 9 spot in the NFC playoff standings, one game and a tie-breaker behind 8-7 Philadelphia in the battle for the No. 7 spot. So the Falcons need to win their last two games and get some help from elsewhere to make the postseason, which is probably asking way too much.

Buffalo, meanwhile, is 2-0 both SU and ATS its last two times out after winning a big one at rival New England last week 33-21. That game was tied at 7-7 in the second quarter when the Bills scored twice to lead 17-7 into the half. Buffalo then scored the first three points of the second half, twice let the Patriots get within one score from there but held on for the W. The Bills out-gained New England 428-288, held a 35:25 time of possession advantage, and won the turnover battle 2-0. Buffalo has now out-gained three of its last five opponents. At 9-6 overall, the Bills are tied for the lead in the AFC East with the Patriots, but Buffalo owns the tie-breaker based on the better divisional record. If the Bills can win out - they host the 4-11 Jets next week - they’ll win the division for the second straight season. These teams last met four seasons ago, a 23-17 Buffalo road win. Tyrod Taylor quarterbacked the Bills that day against Ryan for Atlanta.

These teams have played eight common opponents this season; Buffalo is 7-3 SU, 6-3-1 ATS, and +90 yards per game vs. those eight foes, while the Falcons are 5-4 both SU and ATS but -16 YPG. More Picks: Get Loot’s Dolphins vs. Titans Betting Predictions >>>

Buffalo is out-rushing opponents this season by five YPG, while Atlanta is getting out-rushed by 35 YPG. And in the NFL, teams that win the ground battles cover the spread about 65 percent of the time. Also, the best unit on the field Sunday will be the Bills defense. Also, while the Falcons can beat teams like Detroit, Carolina, and Jacksonville, their last four games against quality opponents have not gone well. So while 14 points can be a ton in the NFL, we’re betting Buffalo here. Want more free loot? GTBets is now offering Predictem readers a 100% REAL CASH bonus on your first deposit of $100 to $500! Click here to boost your bankroll!