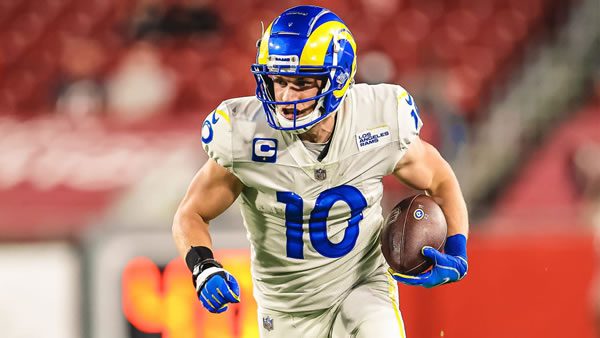 At the beginning of the season, many may have expected Sunday’s Week 9 contest between the Los Angeles Rams and the Tampa Bay Buccaneers to be among the highlights of the season in the NFC. After all, the Rams are the defending Super Bowl Champions, and the Buccaneers are just two years removed from a world title as well. More importantly, the Rams and Buccaneers have been powerhouses in the NFC for the last few years. However, this Sunday’s NFC showdown at Raymond James Stadium does not carry the prestige that most expected, as both the Rams and Buccaneers have been disappointments throughout the 2022 campaign, and surprisingly both teams are below the .500 mark on the season.

Interestingly, Tampa Bay is getting the nod as the slight betting favorite this week despite losing three straight games, which includes losses to inferior teams like Pittsburgh and Carolina. Last Thursday, QB Tom Brady threw for 325 yards and a touchdown, while WR Mike Evans posted a big performance resulting in 6 catches for 123 yards. However, the performance still fell short in a 27-22 loss to the Ravens, as the Tampa Bay defense gave up one of their worst performances of the season. For most of the season, the Bucs’ offense has been a major disappointment, so last week’s defensive blunder just proves that the entire team is not firing on all cylinders.

For the Rams, things have been arguably worse on the offensive side of the football. QB Matthew Stafford has taken a gigantic step backward, with seven passing touchdowns and eight interceptions on the season. While Stafford has not been 100% healthy, the struggles are also attributed to a pathetic Rams’ rushing attack that is averaging just 68 yards per game. The only team that has been worse than the Rams on the ground is Tampa Bay, who is averaging just 61 yards per game on the ground. Needless to say, both offenses have struggled tremendously to run the football, which is attributed to the setbacks this season. To make matters worse for the Rams, star WR Cooper Kupp suffered an ankle injury in last week’s blowout loss to the 49ers, which has put the NFL’s top receiving threat in jeopardy of missing playing time against the Bucs.

When Kupp went down in the waning seconds of last week’s loss against the 49ers, it appeared the injury was serious. However, reports indicate that Kupp avoided any significant injury, and the Rams expect that he will play on Sunday despite the fact it would be hard to believe he will be at 100%. While it is hard to gauge a player’s health from a handicapping standpoint, I will say that I’m not necessarily confident either offense will completely turn the corner this week, and that is out of respect to the talent level of both defenses in this match-up.

For the Rams’ defense, I think they match up extremely well against Tampa Bay. DE Aaron Donald continues to lead a ferocious pass rush and will get the opportunity to take aim at one of the most immobile quarterbacks in the league. CB Jalen Ramsey will likely be paired against WR Mike Evans for obvious reasons to limit Evans’ eruption potential. Perhaps, the only plus-side match-up that the Bucs possess is over the middle of the field with WR Chris Godwin in the slot. However, I’m not sure that match-up advantage will lead to any fireworks, especially if the Bucs continue to struggle running the football.

Meanwhile, on the other side of the ball, the Rams’ extinct rushing attack will draw one of the better run defenses in the league, putting yet more pressure on QB Matthew Stafford. The Rams failed to make any moves before the trade deadline and will move forward with RB Darrell Henderson as the team’s starter. More importantly, the Bucs’ 3-4 defense should make things more difficult for the Rams’ passing attack, and it is worth noting that they have done a great job against the opposing team’s top receivers (AKA Cooper Kupp). Perhaps the Rams could finally get some help from WR Allen Robinson or WR Van Jefferson to pull out a victory, but I don’t have any confidence in either offense in this match-up.

Considering the way both offenses are playing and the huge advantage both defenses should have in this match-up, I feel pretty confident pulling the trigger on the under despite the mere 42.5-point total.

Jay’s Pick: Take the under 42.5. Move the total a ton by inserting it into a massive 20 point NFL totals teaser at Wagerweb Sportsbook!