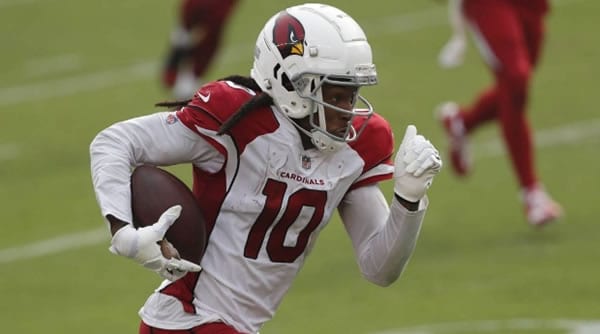 Two exciting young quarterbacks trying to lead their teams to the playoffs meet when Josh Allen and his Bills head West to take on Kyler Murray and his Cardinals Sunday afternoon in suburban Phoenix. Buffalo rides a three-game winning streak into this one, while Arizona just had a three-game winning streak snapped. The Cardinals are favored by less than a field goal at home; who do we like here for our free NFL pick?

Week 10 NFL betting odds opened the Cardinals as two-point favorites over the Bills, with an over/under of around 52. Early betting action then edged Arizona up to -2.5 and steamed that total to 56.

Buffalo is 7-2 on the season after sacking Seattle last week 44-34. The Bills, playing as three-point home dogs, scored the first 17 points of the game and led 24-10 at the half. Buffalo then allowed the Seahawks to pull within 27-20 late in the third quarter but re-established control with 14 quick points early in the fourth and cruised from there for the victory.

The Bills out-gained Seattle but only by a margin of 420-419. But they also won the turnover battle 4-0, picking off Seahawks’ quarterback Russell Wilson twice, recovering two of his fumbles, creating a +16 points differential for Buffalo.

The Bills may be 7-2, but they’ve only out-gained five of their nine opponents this season and out-rushed only four of nine foes.

Two weeks ago, Buffalo beat New England 24-21 but couldn’t cover as a four-point favorite. Three weeks ago, the Bills had to come from behind to beat the winless Jets 18-10 and couldn’t cover at -9.5. In fact, playing against some heightened expectations, Buffalo is just 1-4 ATS over its last five games.

Nonetheless, at 7-2, the Bills lead the AFC East by two games over second-place Miami.

Arizona, meanwhile, just had a three-game winning streak snapped by a 34-31 loss at home to those Dolphins last week. The Cardinals, coming off a bye, gave up a Miami defensive touchdown five minutes into the game and trailed 24-17 at the half. Arizona then led 31-24 in the third quarter, then trailed 34-31 in the fourth. The Cardinals then drove to a 49-yard field goal attempt with two minutes left, only to have it come up short, and couldn’t get the ball back, losing outright as a six-point favorite.

Arizona out-gained the Dolphins 422-312 and won the ground battle 178-91. But that fumble returned for a Miami score in the first quarter, the only turnover of the game, proved to be the difference.

The Cardinals have now out-gained and out-rushed three of their last four opponents, going 3-1 ATS in the process.

Three weeks ago, Arizona out-lasted Seattle in overtime 37-34. Just prior to that, the Cardinals beat Dallas and the Giants by a combined score of 68-20.

At 5-3 overall, Arizona trails the division-leading Seahawks by just one game in the NFC West.

These teams, who have only met 11 times before, last met four seasons ago, a 33-18 Bills home victory. Tyrod Taylor quarterbacked Buffalo that day against Carson Palmer for Arizona.

Overs are 6-2-1 in Bills games this season, which are averaging 53 total points against an average over/under of 48.

Unders are 6-2 in Cardinals games this season, which are averaging 52 points against an average O/U of 51.

Buffalo took advantage of a weak Seattle defense last week; we do not expect 44 points from the Bills this week. On the other hand, Arizona took a tough loss last week; we expect a reversal of fortune this week. And we believe the Cardinals are the better team in this match-up. We’ll take Arizona minus the short spread. Don’t forget to check out our NFL Computer Predictions!