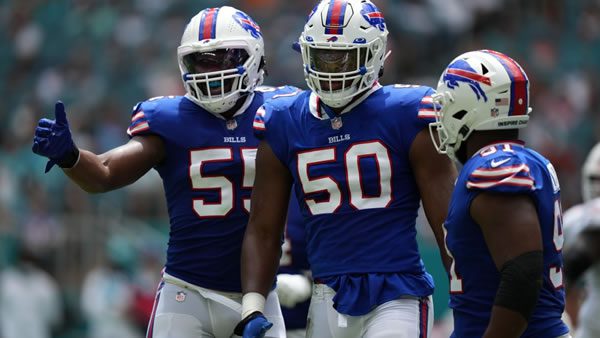 Point Spread: BUF -14/JAC +14 (Intertops - Sign up through our special link, deposit $25, enter bonus code ROOKIE200 on their special offers page and they’ll give you an extra fifty bucks!)

The Buffalo Bills travel to TIAA Bank Field for a week nine AFC showdown with the Jacksonville Jaguars. Coming off the bye on Sunday, the Bills were flat against the Dolphins, only turning the heat on late in their divisional battle with a 26-11 win. At 5-2, they turn their attention to a Jacksonville team that also came off a bye following their first win, only to lay an egg against the Seahawks, 31-7. With only a late garbage-time TD, their offense was inept, and they face a major horsepower differential at home this Sunday. Do the Jags have a prayer?

Can the Jaguars Show Some Life?

It’s a mixed bag, and with their only win over Miami, a team that hasn’t won since the first week of the season, the picture is indeed dire. Part of you wants to defer to a robust QB talent in Trevor Lawrence, a nice back in James Robinson, and an offense that can pop from time to time. And not that it’s really Buffalo’s bag, but the Jacksonville “D” hasn’t been terrible against the run. But an apparent personality chasm between coach and player doesn’t help, nor do the other distractions surrounding that. From a football sense, they suffer from a lack of viable pass-catching targets to bolster Lawrence’s talent, nor a line to protect him well.

Most concerning for Jacksonville’s hopes this week is their pass-defense, an utterly ineffectual group that even allows Geno Smith to have a successful day behind center. Against a Josh Allen-led bunch that is due to strike hard after a bye-week followed by a subdued performance against Miami, this matchup quirk could be more than enough to really bury the Jags. Last week against a Seattle “D” that has been readily-exploitable at points this season, the Jacksonville offense couldn’t do much of anything.

Sometimes lost in the whirlwind of the Buffalo offense is what’s happening on the other side of the ball this season. They have allowed the fewest points of any team in the league this season, with the top-rated pass defense in the league. Against the Jaguars’ pass-attack, this would appear to be a major asset in the Bills’ corner. They’ve scored two shutouts this season, with other standout showings on defense, including last week. The heat comes from a lot of different sources, along with exactly the kind of playmaking secondary that can go to work on a rookie QB working behind a shoddy line with a diminished receiver crew that struggles sometimes to get open. Between the pass-rush and ball-hawks on Buffalo’s defense, this shapes up as a rough potential outing for Lawrence. And as we’ve seen this season from the Bills, a heavy opposing run-game doesn’t really work, either.

Looking for the Jaguars’ Best-Case-Scenario

The Bills will have some big tests in some huge games this season. A road spot to Jacksonville would not be one of them. There have been a few times this season where the Bills were palpably subdued. Coming off the bye and given a succession of easy-touches in the Jaguars and Jets, the Bills are on the road in consecutive weeks but in manageable spots. It’s still a time of the season where they can sort of cruise and not really pay the price.

I’m not so sure I’d be inclined to play the game of trying to forecast a Buffalo letdown. This isn’t really shaping into a conference where that type of on-and-off approach will not get you a premier playoff slot, even if it’s unlikely the Bills would ever be challenged in the AFC East this season. We already have multiple instances this season of the Bills taking liberties with outmanned teams and not letting off the gas on either side of the ball even when comfortably in the lead. After losing to the Titans and coming off the bye to beat the Dolphins in a game that was only 3-3 until late in the third, momentum and timing would suggest a Buffalo explosion more than it would a Bills letdown.

More Picks: See who Loot is betting in the Texans at Dolphins game >>>

Naturally, laying 14 points on the road isn’t ideal. Getting people to sign off on a conclusive Buffalo win is a lot easier than getting people to get behind the Jags at this point. And sure, a day is likely soon coming where laying 14 against Trevor Lawrence at home will be unheard of. Maybe enough key guys on the Bills think to themselves how they’re playing a team that hasn’t won in this country in almost two dozen games. In the NFL, the goal is to win, not to smash a team, so betting the Bills is asking them to do something they’re not even really trying to do. But if the average manifestation of both teams materializes in Jacksonville this week, maybe asking the Bills to win by more than 14 isn’t such a lofty request.

Lay the Big Number on the Road Favorite

It’s a little bit of a funky locale for the Bills in a game that might not command their full respect. An early Jaguars spurt could be a semi-disaster for Bills backers with the size of this road spread, but I see this game as having too many things to overcome for the Jaguars. The Bills’ pass and run defense has passed stiffer tests than this, and the Jags haven’t brought anything to the table on defense this season to suggest being able to curb a Bills’ offense that might be due to shine. I see 14 points as being close to a best-case scenario for the Jaguars, with a lot of more-extreme scenarios also on the table. I’ll take Buffalo.

Loot’s Prediction to Cover the Point Spread: I’m betting on the Buffalo Bills minus 14 points. Bankroll running low? Instead of re-depositing and getting nothing (or a tiny reload bonus), consider doubling your bankroll with a GIANT 100% real cash bonus on your first deposit of $100 to $500 at GTBets Sportsbook! They have an awesome rewards program!