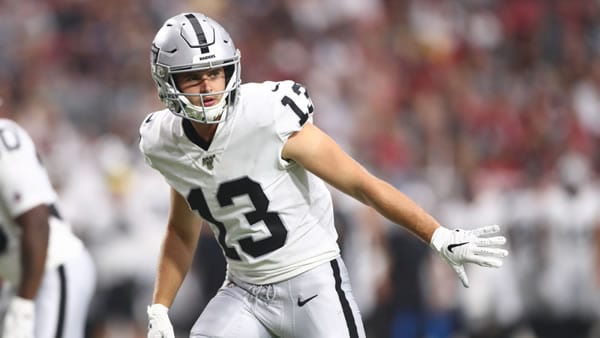 The Buffalo Bills travel to the desert to take on the Las Vegas Raiders on Sunday in week four AFC action. The Raiders debuted successfully in this new stadium two weeks ago against the Saints, but they couldn’t follow it up in a road-spot against the Patriots on Sunday, falling to 2-1 on the season with a 36-20 loss. They get a tough one this week, hosting a 3-0 Bills team that had to dig deep to salvage a 35-32 win over the Rams at home on Sunday. Let’s break this one down!

It’s still early in the season, but the Bills are coming off a taxing win over the Rams on Sunday. After leading 28-3 in the second half, everything started going wrong, with the situation snowballing by each passing minute, as the Rams stormed back in the third quarter. Momentum seemed to suggest the Rams were going to run away with it. But some timely Buffalo plays on defense set up a final drive where QB Josh Allen dug deep and led his team to the game-winning score. Now, they have to pick up and take it to Vegas. And for those east-coasters who have been to Las Vegas in early October, it’s a little different. Something about the climate and altitude can make an unaccustomed Vegas visitor feel as though he has a slight case of the flu.

Looking for a Better Raiders’ Squad This Week

It didn’t work well on the road against the Patriots on Sunday, but being back at home will help the Raiders. And getting impactful TE Darren Waller more up-to-speed this week would go a long way, as his action was limited in Foxborough. He really adds a lot to Derek Carr’s game and brings more out of rookies Bryan Edwards, Henry Ruggs, and guys like Nelson Agholor, Hunter Renfrow, and a nice cast of role guys. It might not be that easy for the Raiders to run the ball against the deep Buffalo front and we haven’t seen Vegas really take off aerially yet. Carr has been efficient, accurate, and has yet to throw a pick. But it seems like he is still getting adjusted to a revamped cast of targets, and Waller’s presence is key and something to watch leading up to game-time.

The Raiders’ defense have seen a better secondary start to form, both in terms of stoutness and in registering big plays. The front, however, has been a bit languid, applying a very uneven pass-rush, while also getting gashed by the opposing run. The Patriots were able to run at will against the Raiders with their varied approach. The Bills have gotten more balanced in the last few years, as Josh Allen becomes more aerially-inclined as he matures, but they can still run the ball well, which looms as a matchup concern.

In a way, one should be hesitant to critique a Bills team after really snatching victory from the jaws of defeat from the Rams on Sunday. And to be able to reverse a gigantic wave of momentum late says a lot about their grit and mental strength. Still, letting off the gas with a lead is a bad trait. And when the tide started to turn, it really turned, and it was almost shocking how quickly the Rams were able to march up and down the field on this defense and erase a 25-point lead in such quick order.

It offers hope to a Raiders’ offense that has some things that could trouble the Buffalo defense. Falling apart for one half doesn’t suddenly relegate the Buffalo “D” to the ranks of the mediocre, but the Raiders’ offense offers some of the same wrinkles that gave Buffalo such trouble. They set things up nicely with the run, with a very accurate and quick-thinking quarterback who has a plethora of different-type targets to put to use. The offensive line hasn’t been opening up holes for the run-game that well yet through three games, and they gave up a safety to New England on Sunday, but they have been repelling the pass-rush well this season so far and should help the Raiders’ offense operate well at home. With Richie Incognito out and Trent Brown banged up, however, as a whole, they’re a little beat up.

What Buffalo Needs To Do

With 1038 passing yards, we see Allen looking really good with an over 70% completion rate. And he can move really well when need be. Getting Stefon Diggs in there, Buffalo has a pretty varied aerial game along with Cole Beasley, John Brown, Isaiah McKenzie, and emerging rookie Gabriel Davis. There are a lot of weapons, and they’re bolstered by a robust line. The Las Vegas defense has areas of promise, but it’s not necessarily going to deliver consistently, as there will still be growing pains. They also are getting the short end of the injury bug in all areas, which doesn’t help expedite their development. That goes for the other side of the ball where rookie receivers Edwards and Ruggs are both listed as day-to-day as of press time. It’s just that the Raiders’ personnel issues could be hard to overcome in difficult spots such as these.

A position on the Raiders is understandable this week, at home catching Buffalo coming off a tough game where they were nosediving in the second half. Having so many players dinged-up, however, is a drawback for the Raiders. And in many ways, you see a Buffalo team that was in a similar position as the Raiders but has managed to right the ship. Their moves paid off. High draft picks delivered. They’re who the Raiders are trying to be. Though certain conditions favor a possible upset and it wouldn’t really be that surprising, I just think Buffalo is going to give the Raiders major issues on both sides of the ball and get the cover this week.

Loot’s Prediction to Cover the Point Spread: I’m betting on the Buffalo Bills minus 3 points. Double up your bet on this game with a 100% real cash bonus at MyBookie! They’ll match your first deposit of $100 to $300! Click here to sign up now!