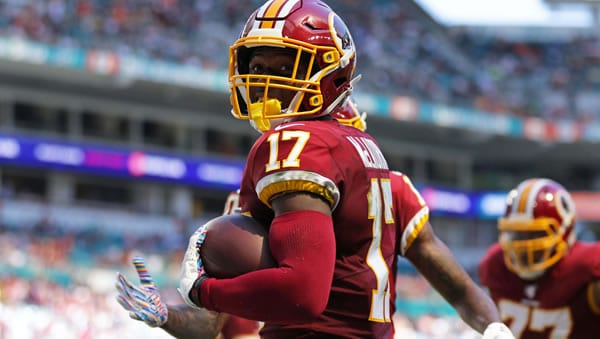 (Learn How to Bet NFL)

It’s a match-up between a young gun and a battered veteran when Joe Burrow and his Bengals go against Alex Smith and the Washington Team Sunday afternoon in suburban DC. Smith will be making his 163rd start in the NFL Sunday, Burrow his tenth, in a game that started off on the betting lines as a pick ’em. Who do we like here for our free NFL pick?

Week 11 NFL betting odds opened this game at right around a pick ’em, with an over/under of 45.5. Early betting action then edged Washington into a one-point favorite and bumped that total to 46.5.

Cincinnati was playing some decent ball, covering three spreads in a row, until it ran into the best team in the League last week, the Pittsburgh Steelers, and lost 36-10. The Bengals trailed 12-0 right off the bat, got to within 12-7 but trailed 22-7 at the half. Cincinnati then came up basically empty from there and whiffed against the spread as a 6.5-point underdog.

Cincinnati has now been out-gained by four of its last five opponents.

Going back a bit further, Cincinnati is 6-2 ATS over its last eight games.

At 2-6-1 overall, the Bengals are probably out of the playoff races in the AFC, but they’ve actually got three or four winnable games left on their schedule. So they’ve still got a chance to play over their season wins over/under of 5.5.

Washington, meanwhile, owns back-to-back three-point losses after falling at Detroit last week 30-27. The Team fell behind to the Lions 7-0 early, trailed 17-3 at the half, and 24-3 early in the third quarter. Washington then scored 21 straight points to forge a 24-24 tie with six minutes left and re-tied the game at 27-27 with 16 seconds left. But a roughing-the-passer penalty and a quick Detroit completion led to a 59-yard Lions field goal at the buzzer and a Washington defeat.

The Team actually out-gained Detroit 464-372 and dominated time of possession by a 36:24 split. But Washington also missed a make-able field goal and committed the only turnover of the game, which led to the Lions field goal. And that was the difference in the game.

Washington has now out-gained each of its last four opponents.

Four games ago, the Team scored late against the Giants to pull within a point at 20-19, went for two but came up empty and lost. Three games ago, they beat Dallas 25-3. And two games back, Washington rallied to within three points of the Giants, drove inside New York territory late but threw an interception and lost 23-20.

At 2-7 overall, Washington, believe it or not, sits only a game and a half behind first-place Philadelphia in the awful NFC East.

These two teams have played three common opponents so far this season; the Bengals are 0-3-1 SU but
3-1 ATS against Cleveland, Baltimore, and Philadelphia, while the Team is 1-2 SU, 2-1 ATS against the Browns, Ravens, and Eagles. Washington averaged -8 yards per game vs. those three opponents, Cincinnati -54.

These teams last met four seasons ago, a 27-27 tie in Cincinnati. Kirk Cousins quarterbacked Washington that day against Andy Dalton for the Bengals.

Overs are 5-3-1 in Bengals games this season, which are averaging 51 total points against an average over/under of 47.

Unders are 5-4 in Washington games this season, which are averaging 44 points against an average O/U of 44.

Cincinnati is playing 34 YPG better than Washington offensively this season, but the Team is playing 77 YPG better defensively. Also, Washington owns the slightly better performance against common foes. Also, in Coach Rivera’s first season at Carolina back in 2011, the Panthers started 2-8, then finished 4-2. And we could see something similar happening with the Team this season. We like Washington here. Bet your We ek 11 football picks FREE by taking advantage of a 100% bonus on your first deposit up to $100 at MyBookie! Must use special bonus code PREDICT100 when signing up to get the bonus credited!