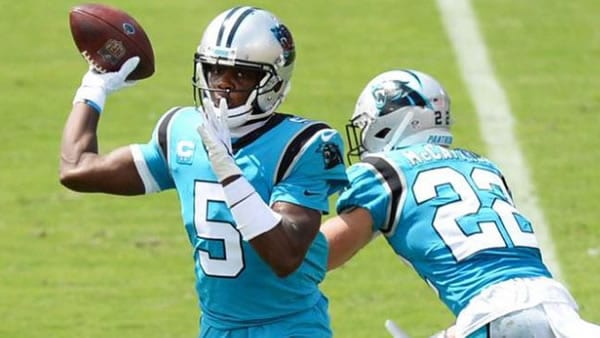 Two struggling teams hoping to finish this season strong meet when the Broncos battle the Panthers Sunday afternoon in Charlotte. Denver is just 1-4 straight up, 2-3 against the spread over its last five games, while Carolina is 1-6 SU but 4-3 ATS its last seven times out. The Panthers, with a glimmer of hope yet to make the playoffs, are favored by three and a hook for this game. Who do we like for our free NFL pick?

Week 14 NFL betting odds opened Carolina at -4 over Denver, with an over/under of right around 46. Early betting action then dipped the Panthers to -3.5 and bumped that total to 47.

Denver is coming off a tough 22-16 loss to the Super Bowl champion Chiefs in Kansas City last week. The Broncos, playing as 13-point dogs, led 3-0 early and 10-9 into halftime. They still led 16-12 late into the third quarter but gave up the last 10 points of the game to fall to a second straight defeat.

Denver did, however, hang on for the cash.

The Broncos have now been out-gained in three of their last four games, scoring a total of 51 points during that span. Two weeks ago, playing without a quarterback, Denver lost to New Orleans 31-3. But just prior to that, the Broncos pulled a 20-13 upset of Miami.

At 4-8 overall, Denver is on the verge of elimination from playoff contention. The Broncos also need to win their last four games to play over their season wins over/under of 7.5. And that just doesn’t look like it’s going to happen.

Carolina, meanwhile, lost a heart-breaker two weeks ago, 28-27 at Minnesota. The Panthers then had last week off. Carolina, playing as a three-point dog, fell behind to the Vikings 7-0 early and trailed 10-7 at the half. The Panthers then used a pair of defensive scores on consecutive plays to take a 21-10 lead into the fourth quarter. The Panthers still led 27-21 late but gave up a Minnesota touchdown with 46 seconds left, then missed what would have been a game-winning 54-yard field goal at the buzzer. However, Carolina hung on for the cash. The Panthers got out-gained by the Vikings, but only by a margin of 387-374. But Carolina quarterback Teddy Bridgewater threw an early interception from the Minnesota 12-yard line, then later missed a wide-open receiver in the end zone when a touchdown would have clinched victory. Carolina has now been out-gained in four of its last six games. Two games ago, the Panthers blanked Detroit 20-0. Prior to that, Carolina lost five games in a row, although four of those losses came by a total of 20 points. At 4-8 overall, the Panthers trail Minnesota by two games in the battle for the final NFC wild-card spot, with four to go. And they also need to win out to play over their season wins O/U, which was also 7.5. These two teams have played six common opponents so far this season. Denver is 1-6 SU, 2-5 ATS against the Buccaneers, Falcons, Raiders, Chargers, Saints, and Chiefs, while Carolina is 2-6 SU, 4-4 ATS vs. those six foes. These two teams last met four seasons ago, a 21-20 Broncos home win. Trevor Siemian quarterbacked Denver that day against Cam Newton for the Panthers. On the personnel front, Carolina scat-back Christian McCaffrey could return to action this week after missing most of this season with a shoulder injury. But with the team going nowhere, this sounds like a bad idea. Meanwhile, Carolina could be without several key guys thanks to virus issues. NFL Betting Trends Home teams are 96-95 SU, 90-100 ATS in the NFL this season. Favorites are 124-66 SU but just 80-109 ATS in the NFL this season.

Denver gave Kansas City a good scare last week, thanks to Gordon and a good defensive effort. And running the ball and playing good defense sounds like a good idea to us. Meanwhile, we’re still not convinced Bridgewater is the answer at QB for Carolina. Also, while the Panthers nearly beat Minnesota a couple of weeks ago, they only scored one offensive touchdown. We’re betting the Broncos here, plus the points.