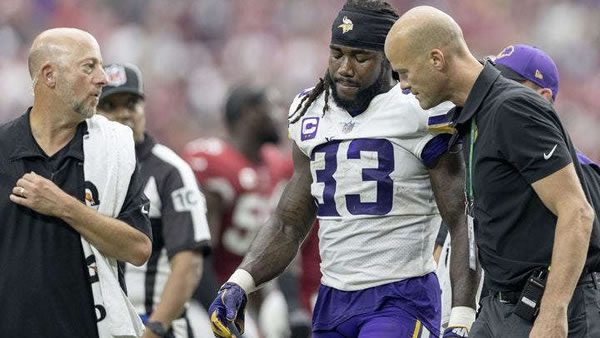 This season, Minnesota is off to a tough-luck 1-3 start, while Detroit is a deserved 0-4 heading into this Black-and-Blue match-up slated for Sunday afternoon in Minneapolis. The Vikings have lost two games this season they could have won; now they’ll play one they almost have to win if they hope for any chance to make the playoffs. The Lions, meanwhile, look like they’re still go-ing through the learning curve under the new coaching regime.

It’s often difficult to pull the trigger on a game matching two struggling teams, but we found a lean here. How are we playing this game with our free NFL betting pick?

The Week 5 NFL betting odds opened the Vikings as eight-point home favorites for this game, with an over/under of right around 49. Early betting action then bumped the Vikes to -9.5 at BetNow.

The Lions remain winless on the season after losing at Chicago last week 24-14. Detroit let the Bears drive the game’s opening possession 75 yards to a touchdown, trailed 14-0 at the half, then let Chicago drive its first possession of the second half, 77 yards to another touchdown, and couldn’t recover from there. The Lions also came up short against the spread as three-point un-derdogs.

Detroit got out-gained by the Bears 373-348, out-rushed 188-90, and turned the ball over four times, twice on fumbles, twice on downs, inside the Chicago 10-yard line.

On the season, the Lions have been out-gained and out-rushed by three of their four opponents. Two weeks ago, the Lions lost at home to Baltimore 19-17 on a 66-yard field goal at the buzzer. Three weeks ago, Detroit led at Green Bay 17-14 at the half before fading to a 35-17 defeat.

The Vikings, meanwhile, are 1-3 on the season after losing at home to Cleveland last week 14-7. Minnesota actually drove the opening possession of the game 75 yards to a touchdown but came up totally empty offensively from there. The Vikes trailed 11-7 at the half, held the Browns to a single field goal in the second half but got nothing themselves, falling ATS as one-point home dogs.

Two weeks ago, the Vikings beat Seattle 30-17. Three weeks ago, they lost to Arizona 34-33 on a missed field goal at the buzzer. And four weeks ago, Minnesota lost at Cincinnati 27-24 in over-time. So one could say that if a couple of plays here and there went another way, the Vikings could be 3-1 instead of 1-3.

Also, both those games played over their totals.

Totals are split 2-2 in Lions games this season, which are averaging 50 total points.

Totals are also 2-2 in Vikings games this season, which are averaging 47 points.

Overs are 3-1 over the last four meetings between these teams.

Minnesota is just the better team here, with the better running game, probably the better quarter-back, and supposedly the better defense. The Vikings really should be at least 2-2, and being 1-3 adds to their urgency. Detroit, meanwhile, is back on the divisional road for the second straight week, a tough place for an 0-4 outfit. We like Minnesota here, minus the points. Bet your week 5 NFL picks for FREE by taking advantage of a 100% REAL CASH bonus on your first deposit of $100 to $500 at GTBets!