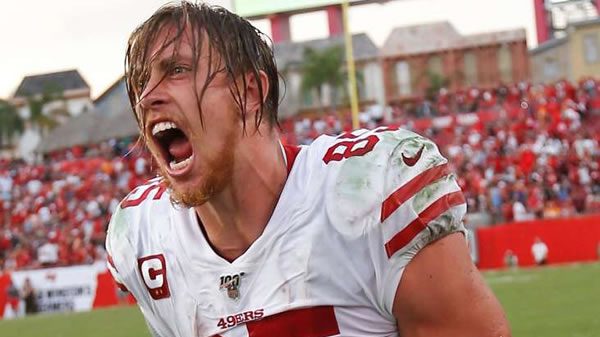 One of the marquee games of week 13 will feature two of the NFL’s best when the Miami Dolphins travel out west for a date with the San Francisco 49ers this Sunday. The 8-3 SU Dolphins have established themselves among the NFL’s top teams this season with a plethora of weapons on the offensive side of the football that is averaging nearly 26 points per game. Just last week, the Dolphins jumped out to a 30-0 lead before halftime over the Houston Texans in a flex-worthy performance despite pulling many of their starters in the 2nd half. This week the Dolphins’ elite offense will meet the NFL’s top-rated defense in San Francisco in an intriguing clash of styles at Levi’s Stadium.

The 49ers are fresh on the heels of an equally impressive defensive performance last week, which resulted in a 13-0 win over the New Orleans Saints. In fact, it was the first shoutout given to the Saints in over 20 years and also marked the 4th straight game where Kyle Shanahan’s defense has not surrendered a single point during the 2nd half. On the cusp of a four-game winning streak that has been bolstered by the acquisition of RB Christian McCaffrey, the 49ers are once again looking like a real Super Bowl threat. Perhaps this weekend, we will get an opportunity to see just how good this 49ers’ defense can be against one of the top offenses in football, and perhaps we also may be able to see if the San Francisco offense has enough firepower to contend in a higher scoring affair if needed.

The key to this match-up will be Miami’s ability to protect QB Tua Tagovailoa against a dangerous San Francisco defense led by DE Nick Bosa, who has already racked up 11.5 sacks on the season. While Miami has received a boost in the running game with Jeff Wilsons from a trade with the 49ers just a few weeks ago, this Dolphins offense still relies on the passing game with Tagovailoa and the deadly duo of receivers with Tyreek Hill and Jaylen Waddle. Both Hill and Waddle have been match-up proof for the majority of the season, and their ability to create space in the passing game has been under-appreciated. If Tagovailoa gets time to throw, I have faith that Hill, Waddle, and the rest of the receiving corps will have opportunities to make plays. However, I’m expecting the “time to throw” window will be a lot more narrow this week as well.

On the other side of the ball, I have not seen anything from Kyle Shanahan’s offense that is overly impressive. The 49ers obviously have some serious talent with McCaffrey and a receiving corps that is highlighted by talents like Deebo Samuel, Brandon Aiyuk, and George Kittle. QB Jimmy Garoppolo continues to play well by hitting 67% passing for 2,381 yards with 16 scores and four picks on the season. However, as I said before, the 49ers are producing relatively average offensive numbers, and the Dolphins have a fairly underrated defense that can create their own pressure points. Jimmy G still has some questionable moments when under pressure, and it will be interesting to see if Miami can get to him on Sunday.

This is a high-profile match-up, and I’m hoping we see the best of both teams. With that being said, I am giving the edge to San Francisco here based upon the pass rush and ability to get pressure on Tua Tagovailoa. If that happens, I believe San Francisco’s offense will do enough to pull out a victory. Therefore, I am going to lay the points for a lower-confidence play!
Jay’s Pick: Take San Francisco 49ers -4. Bet your Week 13 NFL predictions for FREE by taking advantage of a 100% real cash bonus up to $500 at the web’s oldest and most trusted sportsbook when you enter bonus promo code PREDICTEM on the Special Offers page at Everygame Sportsbook! In business since 1983!