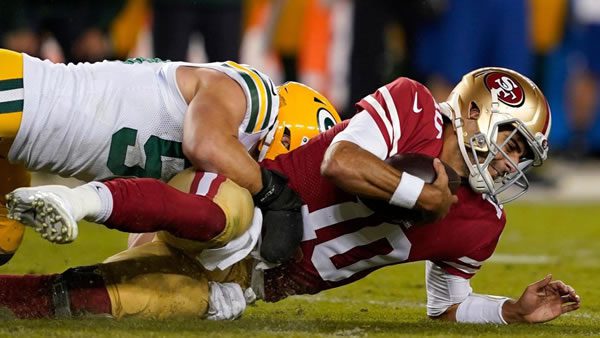 It will be hard to follow the Sunday Night Football act that Baltimore and Kansas City just put on, but San Francisco and Green Bay is a juicy matchup in its own right. These teams have met four times since 2018 with a 2-2 split as a result, and the winner has hit at least 33 points in each of those games. Green Bay went into Levi’s Stadium as a 6-point favorite last November and took care of business, but they are 3.5 point dogs this weekend. Both teams have not only playoff but NFC Championship aspirations, so this is a potential preview of a much more meaningful contest down the line.

Early season injuries have hampered both teams, and while San Francisco has more than their opponent this week, Green Bay has bigger names on the report. The Packers have been without Pro Bowl tackle David Bakhtiari since the preseason and have also lost LB Za’Darius Smith to a back injury. San Francisco’s injuries have consolidated in the running back group as
Raheem Mostert was sent to the IR in Week 1, and each of the subsequent backups has also had issues. Elijah Mitchell, Trey Sermon, and Jamycal Hasty all left early last week, with Hasty getting the worst of it with an ankle injury that will see him miss multiple weeks. Mitchell (shoulder) and Sermon (concussion) have a chance to suit up Sunday, but if they can’t go, Trenton Cannon and Kerryon Johnson could be called on, and neither were part of the plans, even two weeks ago.

Green Bay has been good early, going 8-2 against the spread in their last ten September contests. They also do well against good competition, going 11-5 ATS in the previous sixteen against an opponent with a winning record. San Fran is just 2-6 against the spread in their last eight home games and have just five ATS wins in their previous 26 games as a home favorite. Overall, the over is 5-1 in the last six Green Bay games and 4-0 when GB is the dog. The Over has 13 wins in the last 20 when the Niners are favored. The favorite is 4-1 ATS in the last five in this series.

Aaron Rodgers and the offense predictably got back on track last week against the Lions, but there is still some nervousness about the defense in Green Bay. Detroit led 17-14 at the half in Week 2, and to that point, GB had allowed Jameis Winston and Jared Goff to complete 78% of their passes with seven touchdowns and no picks. The Packers largely put the clams on in the second half last week, but they rank 28th in third-down defense, 29th in rush defense, and have generated just one sack. It is a small sample set, but this defense seems to have taken a step back from last season when they held five straight opponents to fewer than 18 points on their way to the NFC Championship game. The Niners might be banged up, but they are 9th in rushing despite those injuries and will look to control the tempo if GB is going to give them yards on the ground. The Green Bay offense is largely a known commodity, with Aaron Jones getting back on track with four TDs last week and Davante Adams leading the team in receptions and yards, but the playmaking depth is absent in the early going. Backup RB A.J. Dillon hasn’t stepped into the role Jamaal Williams left, and there hasn’t been WR production outside of Adams. Rodgers couldn’t find Davante in Week 1, and the offense log-jammed. Look for San Francisco to make someone other than Adams beat them in the air.

It looks like the NFC West is going to be one of the best divisions in football this season, with the Cardinals, Rams, and Niners all off to 2-0 starts. With some tough division contests starting in Week 4, this week could be significant for San Fran’s early-season momentum. Jimmy Garoppolo has completed 70% of his passes and has averaged 9.1 yards per attempt to help move the offense while the running game looks for healthy bodies. Deebo Samuel is averaging 18.8 yards per reception and gives Jimmy G a nice home run threat alongside his safety blanket George Kittle. This offense has no shortage of playmakers and will only improve once Brandon Aiyuk gets out of the doghouse. Nick Bosa has three of the Niners five sacks through two weeks, and that total should increase with Green Bay struggling against the pass rush.

Lay the Points and Take the Home Team

Green Bay seems to have woken up from a slumber last week, but the win against the Lions was far from a classic performance, and I think this team has some serious issues. The Packer line play is spotty at best, affecting both the run and the pass, and there is a lack of playmaking depth if the opposition can take away Adams. The Green Bay defense was getting rolled over to a large degree last week before the rain helped stymie the Lions, and Detroit’s relative lack of talent caught up with them. Goff was carving up the Packer secondary - especially Kevin King - prior to the half and often faced zero pressure. The Niners have allowed just one sack through two weeks, and Garoppolo is at his best when allowed to read and deliver from a clean pocket. I think this ios a back and forth contest that has a very good chance to push them over with room to spare. The Niners have the better line play on both sides of the ball right now and enough playmaking to cover up their RB injuries. Look for a 32-26 SF win.

Ted Walker’s Pick to Cover the Spread: San Francisco 49ers -3.5. Bet this game and ALL your NFL picks each week at -105 odds (instead of the more expensive -110 your book is socking you) at one of the web’s best sportsbooks: BetAnySports!