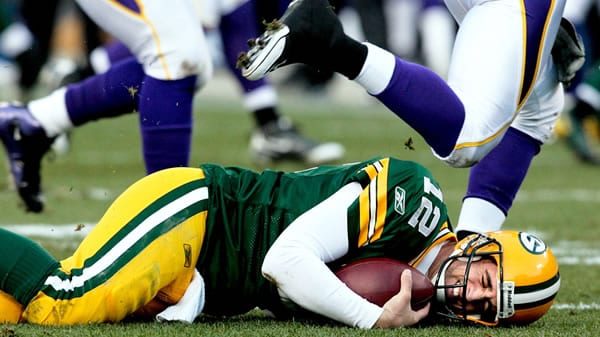 The Divisional Round of the NFL Playoffs is providing several marquee QB showdowns, and while the Brady-Brees matchup is drawing most of the attention on the NFC side, don’t forget about Jared Goff leading the Rams into Green Bay looking for an upset win over the #1 seeded Packers. Goff (thumb) was pressed into action against Seattle after starter John Wolford was removed after a blow to the head, and while Goff looked uncomfortable, he was able to hit on a few big completions, including a touchdown to Robert Woods in the fourth quarter that sealed the deal. He will need a big game if he is to keep up with likely MVP Aaron Rodgers who is fresh off a career-high 48 touchdown passes. Rodgers is 10-8 all-time in the playoffs and 4-2 in six postseason games at Lambeau. The quickest look at this game shows a matchup of the top-ranked Rams defense against the top-ranked Packers offense. In the modern NFL, the offense has come out on top more often than not when No.1 meets No.1.

The Rams have been good on the road in recent seasons, going 13-6 against the spread as a visitor and 6-2 ATS as a road underdog. L.A. has 21 ATS wins in their last 29 games against the NFC and are 4-0 against the spread in their previous four January contests. Green Bay is equally solid in a fresh calendar year, going 7-2 in their last nine in January with a 5-2 ATS mark in the previous seven as a playoff favorite. Green Bay is 10-4 ATS against a team with a winning record and 7-3 against the spread in the last ten at Lambeau. The OVER has hit in each of the Rams last five Divisional Round games and in seven of the last eight when L.A. is the underdog. The OVER is 5-0 in Green Bay’s last five playoff games overall and 7-3 when Green Bay is the favorite. Roughly 55% of the public money is on Green Bay’s side in the early betting, with 63% of bets on the OVER heading into Wednesday.

Ram It Down Their Throat

The Rams have often been a passing threat under Sean McVay, but the run may be the way to go on Saturday as Jared Goff (probable) will have to deal with his banged-up thumb in near-freezing temps and Cooper Kupp is potentially limited by a bad knee. Cam Akers rushed for 131 yards and a score against Seattle and should be able to see success against a Green Bay rushing defense that was 13th in yards allowed and had a handful of down performances against top backs like Dalvin Cook and Jonathan Taylor. With 20 touchdowns in fifteen starts, Goff has the look of a game manager now, but he did throw for nearly 4,000 yards this season and has targets on the outside in Kupp and Robert Woods. That duo combined for 1,910 receiving yards in the regular season and caught half of Goff’s touchdown passes. Tight end Tyler Higbee was second on the team with five touchdown grabs, and the backs are alive in the passing game as well, with 50 receptions from that group in the regular season. The defense is the star of the show in L.A., with the Rams allowing a league-best 18.5 points per game. They are 2nd in sacks with 53 and allow the fewest passing yards per game at just over 190 on average. The run defense ranks third, and their performance could be the pace-setter come Saturday with Green Bay at 8th in rush offense at 132 yards per game. Aaron Donald (probable, ribs) leads the way with 15 sacks, including postseason, and he recorded two sacks and three QB hits in just 30 snaps against Seattle before leaving the game. Leonard Floyd is second on the team with 12.5 sacks, including five in only the last three games. CB Jalen Ramsey has been one of the best shutdown corners in the league, limiting the likes of DeAndre Hopkins and D.K. Metcalf and his ability to stifle Davante Adams could be a huge factor if L.A. has a chance to pull the upset.

Outside of laying an egg in Tampa in Week 6, Green Bay has looked the part of the best team in the NFC and is perhaps the only team from that side that can potentially hang with Kansas City on paper. Much of the Packers’ success has seemed easy behind Aaron Rodgers and his 121.5 passer rating, which ranks second all-time to some guy named Aaron Rodgers, who finished with a 122.5 rating in 2011. A-Rod set a personal-best by completing 70.7% of his passes this season and piloted GB to a league-high 31.8 points per game. Aaron Jones rushed for 1,100 yards and nine touchdowns in just fourteen games and wound up third on the team with 47 receptions. Davante Adams set a Packers record with 115 catches in the regular season despite missing two contests and led the league with 18 receiving scores. TE Robert Tonyan was one of the most curious Pro Bowl snubs after a 52-catch, 11-touchdown campaign, and Marques Valdez-Scantling led the league with 20.9 yards per catch to give Green Bay a little bit of everything from a skill position perspective. The defense has been exceptional against the pass, allowing 221 yards per game with the secondary duo of Jaire Alexander and Darnell Savage combining for 25 pass defenses. Za’Darius Smith recorded 12.5 of the team’s 41 sacks, but 14 different defenders wound up with at least one sack in the regular season.

The KC/CLE game features a 10-point spread, so this isn’t the most lopsided matchup on paper, but Green Bay is legitimately a heavy favorite, and I would not have been surprised to see them open at -7.5 or -8 after L.A. looked rough at times last weekend. No team has found a good answer for Davante Adams, who has notched at least six receptions in every game since his return from injury in Week 6 and caught sixteen touchdowns over his final eleven games. Jalen Ramsey looks to be the best antidote but look for Green Bay to move Adams around to get him away from the Rams #1 CB. Matt LaFleur has plenty of familiarity with Sean McVay after working with him in Washington and L.A. in 2017, and while that knowledge goes both ways, it will be LaFleur who is in the better place to pass along notes to his defense as he ran McVay’s system. There will be 6,000 fans in attendance come Saturday, and that might feel like 60,000 to the Packers players that have not played in front of more than a few hundred at home this season. The Rams offense doesn’t impress me enough to think they will get more than 21 on the board, and I think Green Bay is set to hit 30 even though this L.A. defense is as good as advertised. Green Bay is going to have a much tougher match against either New Orleans or Tampa Bay next week, but they will outclass the Rams on Saturday. I’m looking for a quick start by GB that puts L.A. in a 17-7 kind of bind, and that will turn them a little too pass-happy and playing right into the strength of the Packers defense. Green Bay isn’t a big-time takeaway team, but the sacks will add up against the Rams, and the home team eventually walks out with a 31-21 win.

Ted Walker’s Pick to Cover the Spread: Green Bay Packers minus the points. Bet your LAR/GB pick and ALL your sports bets every day at discounted odds -105 at BAS Sportsbook! Making the switch to reduced odds will save you hundreds (if not thousands) of dollars per year! We urge you to invest 5 minutes to make the switch so you can start enjoying a BETTER betting experience! Click here to start paying less today!