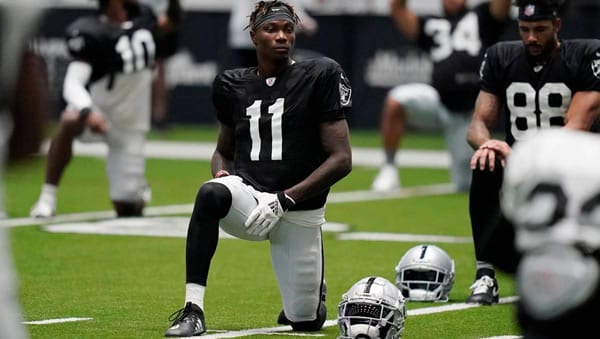 We might learn a lot about the Cleveland Browns character when they host the Las Vegas Raiders Sunday afternoon. The Browns just came from behind to avoid getting upset by a supposedly inferior opponent last week and lost a key offensive weapon in the process. Now they’re faced with another game they’re supposed to win. Just how good is Cleveland? And how are we playing this game with our free NFL pick?

Week 8 NFL betting odds opened Cleveland at -3 over Las Vegas, with an over/under of right around 55.5. Early betting action then slipped that spread to -2.5 and knocked two points off that total.

Las Vegas is 3-3 on the season after losing at home to Tampa Bay last week 45-20. But that game was a little closer than that final score would indicate. The Raiders drove their first possession of the game 70 yards to a touchdown, led 10-7 well into the second quarter but gave up two quick Tampa scores to trail 21-10 at the half. Vegas then rallied to within 24-20 early in the fourth but gave up the last 21 points of the game, creating that misleading final score.

The Raiders have now been out-gained in four of their six games this season, but they’ve also out-rushed four of six foes. And they’re 3-1 both SU and ATS when they win the ground battle.

Three weeks ago, Las Vegas upset the defending Super Bowl champion Chiefs in Kansas City 40-32. So the Raiders are capable of playing good ball against quality opponents on the road.

For the day, the Browns got out-gained by Cincinnati 468-398 and lost time of possession by a 33:27 split. They just made one more big play than the Bengals.

Cleveland has now been out-gained five times in seven games this season, but it’s also out-rushed six of seven opponents. The Browns are 5-1 SU, 3-3 ATS when they win the ground battle this season.

At 5-2 overall, Cleveland sits in third place in the AFC North, a game and a half and a tie-breaker behind Pittsburgh.

The really bad news to come out of Cleveland last week is the knee injury suffered by WR Odell Beckham, which knocks him out for the season. He had accounted for 400 yards from scrimmage and four touchdowns.

These teams met most recently two seasons ago, a wild 45-42 Raiders overtime victory in Mayfield’s first NFL start. That game blew past its over/under of 44.5, as the teams combined for over 1,000 yards of total offense.

Cleveland may be without Beckham, but Carr is listed as questionable for Las Vegas. In fact, both these teams are banged up. The Browns are 4-1 over their last five games while the Raiders are 1-3 over their previous four. Also,Cleveland owns the better running game and the better run defense. Finally, they only need a field goal for the cover. Our faith in the Browns is budding; we’ll take Cleveland, minus the short spread. Bet your Raiders/Browns pick FREE by scoring a 100% real cash bonus on your first deposit of $100 to $300 at MyBookie Sportsbook!