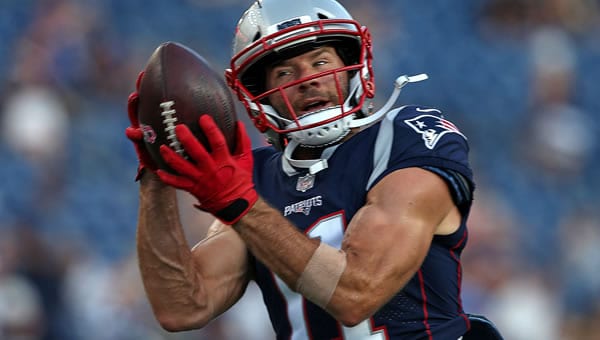 Fresh off of an upset win against the Saints on Monday Night Football, the Oakland Raiders head west to Foxboro to take on the New England Patriots for a Sunday afternoon showdown at Gillette Stadium. The Patriots hold a 19-15-1 all-time edge in the series, including a 6-1 record under Bill Belichick that includes a current five-game winning streak. They last played in Mexico City back in 2017 with the Patriots winning easily 33-8.

The Raiders are off to a 2-0 start for just the fourth time in the last 25 years. A big reason for that success so far has been the play of quarterback Derek Carr, who on the season has completed 73% of his passes along with four touchdowns and zero interceptions. Carr has quietly put up over 4,000 yards passing in each of his past two seasons. Unfortunately, due to being on the Raiders, he has dealt with his fair share of defeats since entering the NFL and is now second all-time in quarterback losses in their first six seasons with 55. The person with the most losses? His brother David, who had 56 after entering the league in 2002 out of Fresno State and nearly getting killed on an every-down basis behind an invisible offensive line for the expansion Houston Texans.

Raider fans will hope the team continues to play well as it hasn’t been an enjoyable last couple of decades for them. The last time the Raiders won a playoff game was in the 2002 season. Since then, they have only finished one year with a winning record and in eleven of those seasons ended with five wins or less. With Gruden back in command and the team loading up on draft picks in recent years to rebuild their offense, things are starting to look up as they enter a new chapter in their new home of Las Vegas.

In an effort to give Carr the necessary keys to driving the offense, the Raiders have spent multiple picks over the last two years on skill position players, especially at wide receiver. They drafted three in the first three rounds in the 2020 draft (Henry Ruggs III, Lynn Bowden, Bryan Edwards) along with former Clemson Tiger Hunter Renfrow in 2019. Selecting Ruggs 12th overall marked the fourth time the Raiders have taken a wide receiver with their first-round pick in the last 25 years, and they will certainly hope he turns out more like Tim Brown (1988) or Amari Cooper (2015) then Darius Heyward-Bey (2009). If not, they can always hope for a career resurgence out of backup tight end Jason Witten, who was selected by the Dallas Cowboys as part of their first-ever draft in 1961.

Through the Raiders’ first two games, Derek Carr has been able to spread the ball around efficiently with short passes, getting many members of the offense involved with 11 different players getting at least one reception against the Saints on Monday and nine different versus the Panthers in week one. His favorite target though is tight end Darren Waller, who currently ranks second in the league in receptions with 18 on the season so far to go along with 148 yards and a touchdown. Waller caught 90 passes out of 117 targets and had 1145 yards receiving in 2019, so this early success is by no means a surprise. If he can keep up this sort of consistency, he has a chance of being in the top echelon of tight ends with George Kittle and giant d-bag Travis Kelce.

The Raiders offensive restocking wasn’t just with the receivers, and they seem to have hit the mark well with their 2019 first-round pick of Josh Jacobs. The former Crimson Tider has rushed for 181 yards with three touchdowns this season while also ranking second in the team in receptions with seven. Despite missing three of the last four games of 2019 due to injury, Jacobs became the first Raiders rookie to ever rush for over 1,000 yards in a season last year, and with his early-season success in 2020, it’s looking pretty clear that he will be their feature back for years to come.

While the Raiders have a clear focal point of their backfield, the Patriots are the opposite, with no one able to step up so far on the ground. James White is still the most reliable pass-catching back in the game, but the team has never seemed willing to give him a full-time chance. Sony Michel has been given every opportunity, but since he lost Gronk and Develin as blockers, he hasn’t been anything more than reliable. Despite offensive coordinator Josh McDaniels’ apparent love of Rex Burkhead, he is really nothing more than a change of pace back. Unfortunately for New England, Josh Jacobs, a former teammate at Alabama Damien Harris, has only appeared in one game since being drafted 2019 thanks to injury, and they are hoping when he is eventually healthy that he can provide the sort of boost to the ground game they were expecting when they took Harris in the third round.

Through the first two weeks of the season, Cam Newton has proven that he has plenty of talent left in the tank in his quest to show 31 NFL teams they made a mistake in passing him up in free agency. Newton is completing over 71% of his passes while rushing for 122 yards and four touchdowns with a 4.7 yards per carry average. He has more than twice as many yards rushing as any other player on the Patriots, and he has 80% of their ground scores on the season so far. There is only so much punishment he will be able to take over a 16-game span, so the team desperately needs another member of their crowded yet so far ineffective backfield to step up and take some of the pressure off of Newton to have to make plays with his feet.

For Newton to continue to find success this week against Oakland, the Patriots will need someone other than Julian Edelman to do something in the receiving game. Both Edelman and N’Keal Harry have been targeted 18 times for 13 receptions apiece, but Harry’s lack of ability to do anything after the catch has him with 111 yards receiving compared to Edelman’s 236 for an average of almost 10 yards less per reception. Thankfully against Seattle, Damiere Byrd was more than just a blocker as he was in week one, posting six catches for 72 yards, but so far, Jakobi Meyers has been an afterthought, and Ryan Izzo has been the only tight end to do anything whatsoever. Much like the backfield, they will need another option to step forward if they are going to be able to maintain a consistent offense throughout the season and keep the burden off as much as possible from Cam Newton.

As good as the Patriots defense was last year, the parts they lost in the offseason have clearly affected the team, especially with the pass rush. They have been near incapable of getting pressure on the opposing teams’ quarterback, and considering they have an efficient short passer in Derek Carr up this Sunday along with Patrick Mahomes on deck in week four; they will desperately need to make whatever changes are needed or else they will undoubtedly see history repeat itself throughout the season against anything resembling a skilled quarterback.

With the excitement of a new location in Las Vegas and a revamped offense thanks to all the picks received from the Khalil Mack trade, the Raiders are trending up for the first time in years. Unfortunately, this week they are off of short rest thanks to their Monday Night game against the Saints and also have to travel across three time zones to play in New England. Since 2003, west coast teams traveling east have won less than 40% of their games, and the Raiders have struggled recently both playing on the road and with success. They have gone 6-21 straight up in their last 27 road games (with a 7-15-1 against the spread record) while also covering in just four of their last eighteen games after a win. With a trip to Arrowhead up next, the Patriots desperately need a win, or else they will be starting their season with a 1-3 record and already behind the eight ball in the division with an improving by the week Buffalo Bills team in front of them. This week’s matchup wasn’t an easy one to pick, but when the game ends Sunday, I expect New England to get the win and cover at home against Las Vegas.

Mike’s Pick to Cover the Point Spread: New England -6. Yes, 5Dimes has left the US betting market. You can still bet on football games at -105 odds though! Make the switch to BetAnySports, where you get the same -105 odds style pricing! Same platform as well!