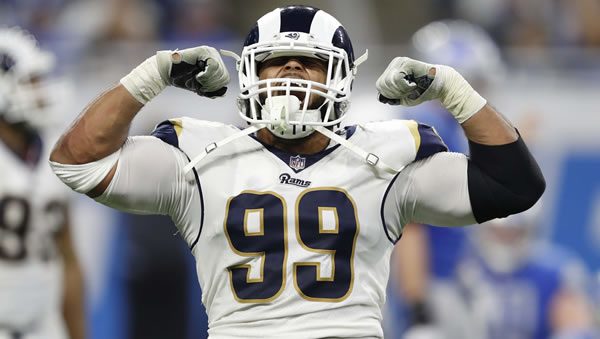 The Los Angeles Rams battle the New York Giants on Sunday in NFC action from MetLife Stadium. The Rams are coming off the long week, following a Thursday Night Football win over the Seahawks, 26-17, to move to 4-1 in the top-heavy NFC West. They now take to the road against a Giants team that was not able to follow up on a nice win over New Orleans the previous week, falling hard to the Cowboys, 44-20, on Sunday. And unfortunately for the Giants, it wasn’t just the loss but the injuries that could make it hard to spin out from that particular defeat. Who can cover the spread this week in East Rutherford?

Can the Giants Recover?

It didn’t take long for injuries to short-circuit their NFC East divisional battle against Dallas last week, with bodies hitting the field with alarming regularity. Before long, they were without QB Daniel Jones, RB Saquon Barkley, and WR Kenny Golladay. The offense got a huge game from rookie receiver Kadarius Toney, and even he got injured. Their third corner went down. It was really a disaster. And for the time being, they will be without Barkley and Golladay.

The good news for the Giants is that both Jones and Toney are listed as day-to-day. If forced to guess, I’d say we likely see Jones in there on Sunday. But when dealing with shaky personnel situations on your offense, this Rams’ team isn’t the one you want to face. We have a Giants’ team that has battled to keep their nose above water even at full power. You start taking away key pieces, and it can get ugly really quickly, as we saw last week against the Cowboys.

It’s hard for the Giants’ offense to make this work, with Jones behind that offensive line, without a key weapon in Barkley and key pieces dropping away in his aerial package. On top of these injuries, Darius Slayton and Sterling Shepard have been missing games. And while some of these guys are due to start filing back into the rotation, it creates quite the jarring dichotomy when comparing the Giants’ dilapidated offense to the healthy and vital Rams’ offense.

Good Road Spot for the Rams?

First off, the Rams are rested, and while not exceedingly banged-up, it helps. They should be able to get a healthier RB Darrell Henderson, while getting some extra time for TE Tyler Higbee to get over a bum shoulder. Either way, following a bad loss to the Cardinals the previous week in their only loss of the season, the big win over Seattle saw a closer-to-vintage Rams’ team doing its thing, with the many weapons on offense in full-flex, with a defense that curbed a powerful Seattle offense.

This is a tough road spot in a faraway stadium. It’s within their conference but not the friendliest confines for this west coast juggernaut. It’s just that whatever resistance we saw from the Giants now comes into question with all the injuries. With an offense dealing with many issues, it strings out a defense that isn’t bad but needs support in which to thrive. Before getting flattened by Dallas on Sunday, the Giants had been showing good resistance, the same type of play that could potentially curb the powerful Rams’ offense. The defense we saw last week, however, is a disaster waiting to happen against Matthew Stafford and Company.

In addition, with the Rams already losing to the first-place Cardinals, the Rams aren’t in the same position as a lot of 4-1 teams. They’re looking for big things this season, and that doesn’t mean second place. In other words, the Giants can’t expect any apathy from the Rams this week. Their defense will be facing a lot of weapons—the game-breaking Cooper Kupp, surging receiver Robert Woods, and speedsters all over this offense.

Can Rams’ Defense Take Over?

Perhaps playing offenses like the Cardinals, Seahawks, and Buccaneers has left the Rams with some less-than-fearsome defensive stats. They haven’t been all that great against the pass and barely average against the run. They will look for better, and against offenses like this, one would expect something closer to a vintage Rams’ defense. Last week against Seattle saw them more-pointed in a good direction.

A Giants’ offensive line that hasn’t been protecting Jones or springing the run-game will be up against it with Aaron Donald and that Rams’ defensive front. With the Giants’ seeing their aerial corps decimated, Jalen Ramsey and others won’t have their toughest test of the season in this spot. Under ideal circumstances, the Giants have enough viable pass-catchers to throw the Rams’ secondary off, but in their reduced state, it becomes a more manageable spot for this Rams’ pass defense. With the Giants’ offense operating with such little margin for error, a few big plays by the Rams on “D” would make this an uphill battle that’s too steep for the Giants.

There is a possibility that the Rams aren’t shot out of a cannon against a team that fails to yield a ton of urgency. Or maybe we’re reading too much into the Giants’ recent run of injuries. The Giants do have this sneaky quality, with certain youngsters that are often overlooked who can step up with a big game from time to time. Jones is a threat to have a really good game. But with that line and most of Jones’ best weapons having their health in question makes it hard to forecast massive success in this spot. The Rams’ offense could end up suffocating the entire Giants’ operation, and if not, their defense very well could. I’m laying the points on the Rams this week.

Loot’s Prediction to Cover the Point Spread: I’m betting on the Los Angeles Rams minus 10.5 points. Check this out. It’s the best bonus you’ll ever see on the web! —> Deposit $25 and get a FREE $50 bet! Simply register for a betting account at Intertops Sportsbook through this special link, deposit $25 and then enter bonus code ROOKIE200 on their Special Offers page and and extra fifty bucks will show up instantly in your wagering account!