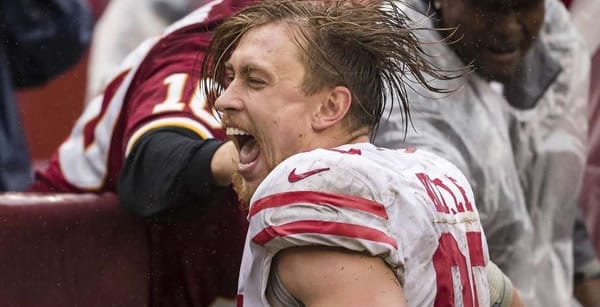 The Minnesota Vikings face the San Francisco 49ers in the divisional round on the NFC playoffs on Saturday. For the top-seed 49ers, they got last week off—the rewards of a 13-3 season where they finished strong to win their division and lock up home field throughout the postseason. In their previous game, Jimmy Garoppolo helped snatch a win from the jaws of defeat in a big win against Seattle, the perfect prelude to this playoff showdown. But in springing a big upset over an NFC power on the road last week, the Vikings look to do it again on Saturday. On Sunday, Minnesota beat the Saints, 26-20, and the kind of guts and fire they showed in doing so could go a long way this week.

Different Task for the Minnesota “D”

Throughout the season, we saw a sometimes-leaky Minnesota defense, particularly against the better offenses they faced. Holding a home Saints team to 20 in an OT battle shows they can play over their heads. The pass defense is readily-exploitable, and that will be an area Garoppolo and the Niners varied attack will be looking to exploit. It’s not the most-prolific air-offense, but a lot of people get involved, and Frisco should be able to connect with their great tight end in George Kittle and their different backs, many of whom do damage in the short passing game. The Vikings’ gave up a ton of completions to Drew Brees and the Saints, but never the kind of game-changer where they couldn’t recover.

A big question for the purposes of who will cover the spread here is if the Vikings’ defense can assuage the varied and potent Niners’ ground game. With Raheem Mostert, Matt Breida, Tevin Coleman, and emerging Deebo Samuel getting involved, even a very solid Minnesota front-seven will be pushed to its maximum. They’re perhaps better in playmaking ability than actually being stout. With Danielle Hunter, Anthony Barr, Eric Kendricks, and others, they get after it but will be facing a different challenge this week. It’s an offense without stars and, as a result, no one to really focus on. How will this defense perform in their second straight road playoff game?

Has the 49ers’ Defense Peaked?

Earlier in the season, we saw a San Fran defense performing well, one of the best units in the league. And when one looks at the numbers, it certainly paints the “D” in a positive light, as it should. Still, over the final four games of the season, they gave up a total of 127 points. It wasn’t very befitting of a defense that boasts of a lot of firepower across all levels. Up front, Nick Bosa, DeForest Buckner, and Arik Armstead can wreak havoc on this Minnesota offensive line, with Fred Warner and Dre Greenlaw in the middle doing damage. Richard Sherman has been great this season, and the secondary is the top-ranked unit in the league. So there’s some contradictory information here, as we balance their overall high standing and their iffy recent form.

The Wild Card round offered some real promise for the Vikings’ offense. They are now close to full-power in terms of having all of their pertinent weaponry available. In addition, the mental boost the whole team got with their gutty OT road win over the Saints was huge, particularly for Kirk Cousins. For a player maligned for not delivering in the clutch, his work in overtime was eye-opening. They have a good back in Dalvin Cook, who showed he’s ready to go with two TDs on Sunday. Cousins can rely on good receivers like Stefon Diggs and Adam Thielen, who worked his way back into the offense with a big game against New Orleans. We’ve seen worse offenses succeed against this Niners’ defense this season.

This time in the season, it goes beyond numbers and matchups. Seeing Cousins commandeer this Minnesota offense to what seemed like an unlikely win showed that they have a certain mojo—the ability to manufacture a result where what appeared on paper suggested otherwise. With the defense playing a little over its head, there was enough room for Cousins and his weapons to step up with something big.

Granted, the Niners have hit higher notes this season than the Vikings. But the bulk of that came in the first half of the season. The 49ers are at home, and the Vikings find themselves on the road for their second postseason game in as many weeks. The point spread is certainly understandable. But looking at the last month of the season, was there really that much to indicate that the 49ers are a markedly better team? We’ve already seen Minnesota dispatch one 13-win team, with the Packers and Niners two more 13-win teams that seem imminently-beatable, which is strange for teams with that much shine. I’m not so sure there are much separating teams in this conference playoff-picture.

There is a big range of possible results here, and it’s not easy trying to pinpoint a more-likely result. The Vikings could win this game, or they could hit a wall, and neither would be that shocking. The 49ers are very good and could end up going far, but I don’t think the road will be easy, starting with a good team in the Vikings that has shown it can find the answers in this kind of setting. I envision a game that is a struggle, with the idea of getting a touchdown offering some comfort in what should be a good game. I’ll take the Vikes.

Loot’s Pick to Cover the Point Spread: I’m betting on the Minnesota Vikings plus 7 points. Bet your Vkings/Niners pick and ALL your sports wagers at -105 discounted odds instead of the spendier -110 option your book forces you into by making the switch today to 5Dimes! They’re simply better!