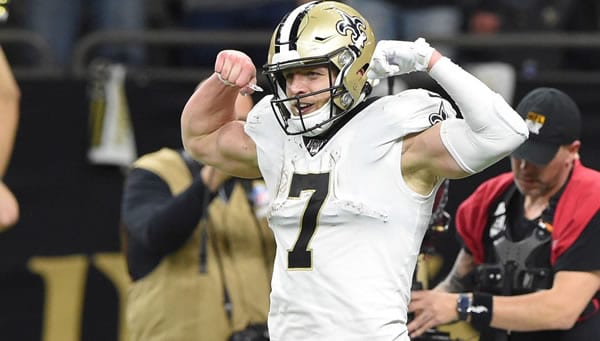 The Saints continue to win games without their starting quarterback, while the Eagles are making a change at that spot, heading into Sunday afternoon’s playoff rematch at the Linc. New Orleans is a perfect 8-0 both straight up and against the spread its last eight times out with its back-up QB, although a good share of the credit should go to the defense. Meanwhile, Philadelphia is turning its reins over to a rookie. The Saints are favored by a solid touchdown for this one; who do we like for our free NFL pick?

Week 14 NFL betting odds opened the Saints at -6.5 over Philly, with an over/under of 46. Early betting action then bumped New Orleans to -7 and dropped that total to 44.

New Orleans just ran its winning streak to nine in a row with a tough 21-16 victory over rival Atlanta last week. The Saints, again playing without starting quarterback Drew Brees, struck first on a Taysom Hill touchdown pass eight minutes in and led 14-9 at the half. They then drove the opening possession of the second half 75 yards to a touchdown and held on from there for the win and the cover as three-point favorites.

In the end, the New Orleans defense preserved the victory with two stops in the last four minutes.

New Orleans has now out-gained and out-rushed nine of its last ten opponents.

The Saints have also covered five spreads in a row, thanks in large part to a defense that’s allowed a total of just 44 points over those last five games.

At 10-2, overall, New Orleans has already clinched a playoff berth and leads Green Bay by one game in the battle for the No. 1 seed in the NFC.

Philadelphia, meanwhile, totes a four-game losing skid into Sunday, after falling to the Packers at Lambeau Field last week 30-16. The Eagles actually took an early 3-0 lead, then gave up a 23-0 Green Bay run spanning the halves. Philadelphia pulled to within 23-16 with six minutes left and got the ball back but punted, then got gouged for a 77-yard Aaron Jones touchdown run that ended any hopes of a comeback.

The Eagles also came up short ATS as eight-point underdogs.

Philadelphia got out-gained by the Packers 437-278. So the Eagles have now been out-gained in each of their last five games.

Two games ago, Philadelphia lost to Seattle 23-17; three games ago, the Eagles lost to Cleveland 22-17; and four games ago, they lost to the Giants 27-17. So this Philly team is averaging about a touchdown per half over its last four games, and that just ain’t enough.

In an effort to create some spark, the Eagles have made a change at quarterback, replacing the ineffective Carson Wentz with rookie Jalen Hurts, who gets his first NFL start this week.

At 3-8-1 overall, Philadelphia now trails the Giants and Washington by a game and a half in the NFC East race.

These teams just met for a tough NFC divisional-round playoff game last January, a 20-14 New Orleans victory. The Saints, favored by 8.5 points, spotted Philadelphia the first 14 points of the game but rallied for the win. Brees quarterbacked New Orleans that day against Nick Foles for the Eagles.

Also, that game played way under a total of 52.

Overs are 7-5 in Saints games this season, which are averaging 49 total points.

Unders are 8-4 in Eagles games this season, which are averaging 47 points.

New Orleans is out-rushing opponents by 65 yards per game; Philadelphia is getting out-rushed by 13 yards per game. Also, throwing a rookie quarterback into his first pro start against the No. 1-ranked defense in the league doesn’t sound conducive to success. We like the Saints here, and we’ll get down early before that line goes up any more. Bet your Week 14 picks and ALL your sports bets EVERY WEEK at reduced odds at BetAnySports! Risking -110 odds on games is dumb. Betting on games at -105 odds is smart. It’s really that simple! Click here to start enjoying cheaper betting today!