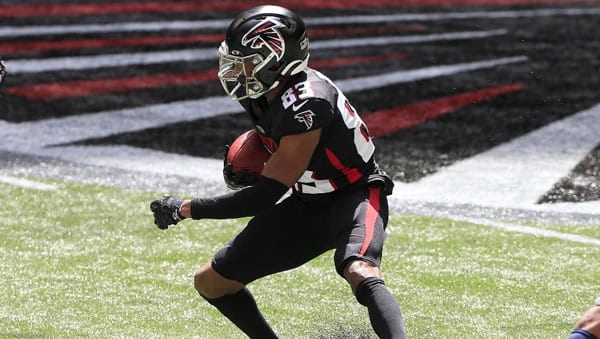 It’s not often an 0-4 team is favored, but that’s the case for Sunday afternoon’s Falcons-Panthers NFC South divisional bout in Atlanta. The Falcons would be 2-2 if they could hold the lead, but apparently, they can’t. The Panthers, meanwhile, are 2-2, playing above expectations so far. How are we playing this game with one of our free Week 5 NFL picks?

Week 5’s NFL betting odds opened Atlanta as a three-point home favorite over Carolina, with an over/under of around 52. Early betting action then dipped the Falcons to -2 and bumped the total to at least 53.

Carolina started 0-2 under new head coach Matt Rhule, which is apt to happen, but the Panthers are now 2-2 after beating Arizona last week 31-21. Carolina, playing as a three-point home dog and again without RB Christian McCaffrey, drove their first two possessions of the game 66 and 80 yards to touchdowns and a 14-0 lead. The Panthers took a 21-7 advantage into halftime, then scored the first seven points out of the locker room and cruised from there for the victory.

On the day, Carolina out-gained the Cardinals 444-262, out-rushed Arizona 168-129, and dominated time of possession by a 37:23 split. QB Teddy Bridgewater threw two touchdown passes and ran for another while the RB combo of Mike Davis and Reggie Bonnafon produced 137 rushing yards on 26 carries.

At 2-2 overall, the Panthers are tied for second place in the NFC South with New Orleans, one game back of the division-leading Buccaneers.

Meanwhile, Atlanta is a disaster right now at 0-4 after losing at Green Bay Monday night 30-16. The Falcons punted on the game’s opening possession, then allowed the Packers to drive 73 yards to a touchdown. A few minutes later, Atlanta drove 94 yards but settled for a short field goal, then gave up two touchdowns to a tight end even most Packers fans had never heard of to trail 20-3 into the half. The Falcons pulled to within 20-9 midway through the third quarter and 27-16 early in the fourth but could get no closer and whiffed ATS as five-point dogs.

On the injury front, Carolina is still playing without McCaffrey, while Atlanta is banged up in the secondary.

Atlanta owns a five-game winning streak both SU and ATS in this rivalry with Carolina, after sweeping the season series last year by scores of 29-3 and 40-20. The Falcons covered those games as favorites of 3.5 points both times.

Carolina’s been playing the better ball this season, particularly on defense the last couple of weeks. And Bridgewater owns that great record as a starter. Coach Rhule might have the Panthers headed in a good direction. On the other hand, Atlanta is down and banged up, and probably shouldn’t be favored. Even if the Falcons go up, the specter of the blown lead looms over their sideline. We’re going with the team with the good mental health at the moment; we’ll take the Panthers. Note: As many are aware, 5Dimes has left the USA betting market. Many are really bummed out that they’ve lost the ability to wager on games at -105 odds and aren’t aware that they still can. Yes! You can bet get your reduced vig back at their old sister book BetAnySports, who will remain in Costa Rica and service the U.S. market with the same wagering platform and -105 reduced juice offerings! Click here to get your killer betting odds back!