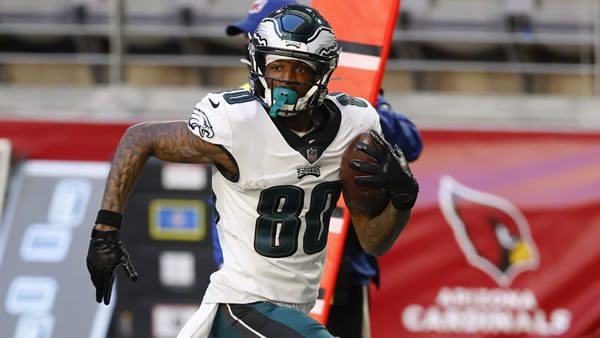 The Eagles are honing in on a playoff berth while Washington is fading away heading into this.
NFC East rivalry bout slated for Sunday afternoon at FedEx Field. Philadelphia started 3-6 this season, but it’s 5-1 since. On the other hand, the Football team started 6-6, but it’s 0-3 since.

The Eagles are lined as short divisional road favorites for Sunday over the Team. How are we playing this game with our free NFL betting pick?

The Week 17 NFL betting odds opened the Eagles as 3.5-point favorites for this game, with an over/under of right around 44. Early betting action then knocked the hook off that line and bumped that total to 46.

Philadelphia flies a three-game winning streak into Sunday after beating the Giants last week 34-10. The Eagles only played New York, which was playing rookie Jake Fromm at quarterback, to an ugly 3-3 tie into halftime but scored the first 31 points of the second half, pulling away for the victory the cover as 11-point favorites.

So the Eagles have now out-gained and out-rushed each of their last six opponents, going 4-1-1 ATS along the way.

At 8-7 overall, the Eagles own the No. 7 spot in the NFC playoff standings. With a win, Sunday, and a little help from elsewhere, Philly could clinch a postseason berth.

Washington, meanwhile, totes a three-game losing skid into Sunday after getting embarrassed at Dallas last week 56-14. The Football Team, playing on short rest, fell down 21-0 in the first quarter, trailed 42-7 at the half, then gave up the first 14 points of the second half and totally whiffed ATS at +10.

Washington got out-gained by the Cowboys 497-257 and gave up a pair of defensive/special teams touchdowns.

So after reaching 6-6 on the season, Washington, now 6-9, trails No. 7 Philadelphia by two games and three other teams, with two games to play. And good luck with that.

Philadelphia beat Washington six times in a row from 2017-19 before the Team swept the two games from the Eagles last season by scores of 27-17 and 20-14. Philly then grabbed the first meeting between these teams this season two weeks ago, 27-17.

Washington scored the first 10 points of that game two weeks ago, but the Eagles scored the next 20 and hung on from there. Philadelphia also tacked on an insurance touchdown in the fourth quarter to push the spread at -10.

The Eagles out-gained the WFT that night 519-237, out-rushed Washington 238-63, and won the time of possession by a 35:25 split. If Philly wouldn’t have turned the ball over twice, which basically cost them 13 points, they would have covered easily.

Also, that last Eagles score pushed that game over its total of 40.

Overs are 9-6 in Eagles games this season, which are averaging 48 total points.

The Under is 8-7 in Washington games this season, which are averaging 47 points.

The overs are 4-1 over the last five meetings between these teams.

Philadelphia is trending in a good direction right now. Washington, not so much. Also, the Eagles lead the league in rushing, and the best unit on the field Sunday will be the Philadelphia defense. Also, Philly just dominated the WFT two weeks ago. We’re betting the Eagles here. Bet your Eagles/Football Team pick and ALL your Week 17 NFL predictions for free by taking advantage of a 100% REAL CASH bonus on your first deposit up to $500 at GTBets!