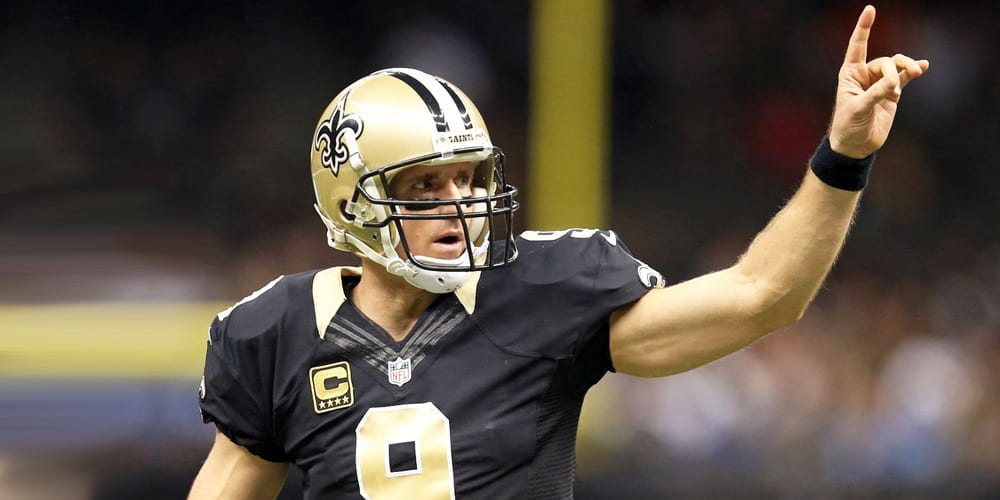 2017 was a dream season for the Saints. They came into the season with three consecutive 7 win campaigns and 3rd place finishes in the NFC South. Sportsbooks set the 2017 over/under at 8, and the Saints eclipsed that mark after winning their first game in December. They went on to win 11, win the NFC South, and were 1 miracle play by Stefon Diggs and the Vikings away from travelling to Philly to play the Eagles in the NFC Championship game.

The Saints come into 2018 riding high, but the bookmakers expect some regression, setting this year’s over/under at 9.5. The line is getting two-way action, so this line should stick. Last year only 10 teams got to 10 wins, and 3 of them were in the AFC South, so it won’t be a walk in the park, but Over 9.5 is the play. Here are 4 reasons.

The Offense is Unstoppable

Drew Brees and the Saints Offense were 4th in scoring, 2nd in total yards and 1st in yards per play in 2017. Balance was the key in the Superdome, as both the rushing and passing attacks were 5th in the league in total yards. Mark Ingram led the rushing attack ranking 5th in the league in total yards. Brees led the league in pass completions and yards per attempt while only throwing 8 interceptions. Michael Thomas continued his development by hauling in 104 passes, establishing himself as one of the league’s elite pass catchers. But 3rd round running back Alvin Kamara proved to be the piece that Sean Payton would use to move the Saints from good to great. Kamara’s 1554 scrimmage yards earned him Offensive Rookie of the Year.

In 2018, defensive coordinators will have sleepless nights while preparing for New Orleans. Sean Payton is an elite play caller that makes defenses defend the whole field. Although Ingram will miss the first 4 contests serving a suspension, the running game shouldn’t miss a beat. Kamara can handle a greater load during those contests. When Ingram returns, he and Kamara will make up arguably best 1-2 punch of RBs in the league. Ingram gets little respect, but he has averaged 5 yards per carry over the last 2 years, while also catching 100 passes.

Ted Ginn Jr. left division rival Carolina last year for New Orleans and contributed 53 catches and 4 TDs. Ginn’s speed can still get on top of defenses and prevents opponents from loading the box. Cam Meredith comes to the Saints from the Bears to join Brandon Coleman and 3rd round rookie Tre’Quan Smith and round out the receiving corps. Payton’s Saints offenses have never had trouble scoring points and 2018 will be more of the same. Even strong defensive opponents will have to score 24 or more points each week to come away with wins.

The Defense is Ascending

Dennis Allen took over as Saints D Coordinator midway through the 2015 campaign. Prior to his arrival, the Saints defense was coached by Rob Ryan and was historically bad. 2016 didn’t bring much improvement, but huge strides were made in 2017. The team allowed only 326 points in 2017 – good for 10th in the league and 128 fewer points than 31st ranked defense New Orleans fielded in 2016. The defense intercepted opposing passers 20 times last year, 3rd in the league and 11 more than the 2016 Saints.

First round rookie Marshon Lattimore exceeded even the highest expectations, playing as a true lock down cornerback. Cameron Jordan nearly doubled his 7.5 sacks from 2016, getting to the QB 13 times last year. Elite NFL defenses have 2 stud pass rushers, but Jordan did not have complimentary player opposite of him. So the Saints traded up in the draft to take Marcus Davenport in the first round. Davenport is a high upside talent who recorded 8.5 sacks for UT San Antonio. Next to consensus top 5 pick Bradley Chubb, Davenport was seen as the best pass rushing prospect available, but time will tell if he can perform at the highest level. Kurt Coleman was signed away from division rival Carolina to fortify the Safety position. All signs point to this defense continuing to improve and making the Saints a completely balanced squad.

Intangibles Are on the Saints Side

The Saints opened last year and were sitting at 0-2 after getting smoked by the Vikings and Patriots to open the season. Payton sorted out the running back situation at this point, backing off of the Adrian Peterson experiment, and increasing Kamara’s usage. Week 3 started an 8-game winning streak for the Saints, and there 3 losses after week 2 were all by less than 7 points. Only one of their wins was by less than 7 points. With some better bounces, 11 wins could easily have been 12 or 13 wins. Had Safety Marcus Williams tackled Diggs in the division playoff game, the Saints probably would have been favored the next week at the Eagles, and we could be talking about the Saints as Super Bowl champions.

The bottom line is the 2017 Saints were one of the top 4 or 5 teams in the league. They return all of the key contributors from 2017 to the 2018 squad, and have added some complimentary pieces, including drafting a potential 8-10 sack defensive end. Had the Saints way had a couple more fortuitous bounces, the 2018 over/under could be 10.5 or 11.

The schedule Is also on the Saints Side

New Orleans plays 4 teams that won their division last year. 3 of those games will be played in front of Who Dat Nation in the Superdome, one of the 2 or 3 toughest venues for opposing teams. The Saints will be favored in all 8 of their home games. Of their 8 road games, we would expect the Saints will be underdogs against the Falcons, Vikings and Panthers, and maybe Baltimore in week 7. The Saints should be favored in their other 4 road games - Giants, Bengals, Cowboys and Bucs. Even if we go out on a limb and say that Dallas will be a 1 or 2 point favorites vs New Orleans, Payton’s squad will be favored in 11 games. Shouldn’t that make the over/under 11? The Saints were 7-1 straight up in games they were favored last year, losing only to the Bucs in week 17 (and 4-4 straight up when underdogs). If this equation continues this year – which it should, double digit wins is a lock.