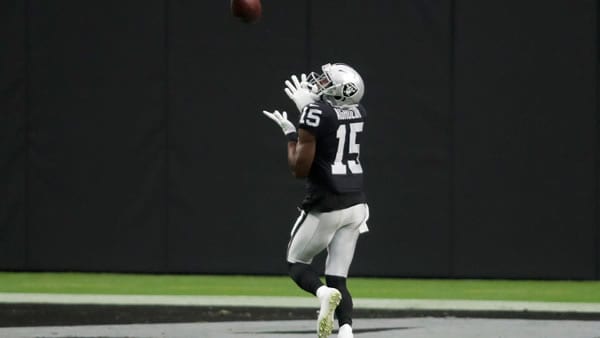 The Las Vegas Raiders come to Mercedes-Benz Stadium on Sunday for a Week 12 matchup with the Atlanta Falcons. Neither team had a great time of it on Sunday. The Raiders, with a chance to go to 7-3 and put a season-sweep on the Chiefs, saw the late-game action not break their way in a tough-to-take 35-31 loss. They look to atone for that this week against a Falcons team that saw their little spurt end on Sunday in an ugly 24-9 loss to the Saints. After an 0-5 start, they had won three of four and two in a row and look to resume that form this week. They come home where they’ve been better overall this season to await a Silver and Black squad that should be chomping at the bit. Who can get it done this week and cover the spread in Atlanta?

Good Spot for the Raiders?

Other than an early-season loss to the Patriots, the Raiders have been pretty steady on the road, beating the Panthers, Chiefs, Browns, and Broncos away from home already this season. At 6-4, they’re a team that has seen a lot of good things come together this season, but they are running out of margin for error in a conference packed with contenders and teams pressing for a postseason slot. The loss on Sunday night aside, the Raiders have been playing well, winners of three in a row, before falling to another late-game Patrick Mahomes drive. One could rightfully expect an irritated Raiders team that is in no mood to play around come Sunday. It may have been better for the Falcons if the Raiders just went ahead and won on Sunday night. It’s just unfortunate that the Falcons are catching a Raiders team that is really at a crossroads section of their season. If big things are going to happen this season, losing to the Falcons in this spot would be a damning indictment.

On one hand, you have the better team in the Raiders, a squad that has more to play for and should be in an urgent headspace. In the other corner is an Atlanta team that has struggled for success this season with a long string of defeats, letdown performances, and a midseason head coach firing. It paints a stark picture, and on the surface, you could understand how someone would be watering at the mouth over the Raiders this week. After all, their diverse passing game should wreak havoc on a collapsed Atlanta secondary. At the same time, the Raiders’ defense could potentially dominate an Atlanta offensive line that looked to be in shambles last week. But they’re on the road, out of their conference, in a dome, and playing a team that has been playing better, despite last week’s failings.

Watching any team for a one-game window can be misleading, but it’s going to be hard for anyone to get behind the Falcons after seeing them last week. They still have Matt Ryan, a lively receiver crew, and other cogs in the offense that can do damage. But Todd Gurley has failed to significantly upgrade their ground-game, and the offensive line can sink to depths seldom seen in this league. After a promising start to the game where the Falcons led, the Saints took over, as their defense swarmed the Falcons and dominated the game. They picked off Ryan twice and sacked him eight times. Seldom was he in a clean pocket. It has a way of taking an offense that actually has some upside and rendering it utterly impotent.

The optimist could find source for hope. The Saints might be the leading conference contender and maybe a little out of the Falcons’ depth, especially on the road. When considering that they won three of four leading into that game, while being in a handful of other games they lost, you see that they’re a 3-7 team with a twist. Sure, they tend to collapse late in games, and they aren’t very clutch or resilient, but they’re really just a twist here and there away from having a very different looking record. And at home this season, they haven’t been embarrassed yet. Still, to come off the bye and stink it up so bad last week isn’t encouraging.

Hope For the Falcons

Matt Ryan can still air it out, and just because it didn’t work against a really good Saints’ defense doesn’t mean it can’t resonate in this home-setting against a team a little out of its element. With Calvin Ridley, Julio Jones, and a group of other contributors like TE Hayden Hurst, Russell Gage, and Olamide Zaccheaus, their offense might not match up so badly with a Raiders’ defense that has struggled on occasion against opposing aerial offenses, as we saw last week. The Raiders’ defense has been coming around, with different guys stepping up to make this a far more-impactful unit this season. And usually, they’re pretty clutch. But the leakiness of their pass-defense looms as a constant undermining threat, and it happens to be what Atlanta does best.

Loot’s Prediction to Cover the Point Spread: I’m betting on the Las Vegas Raiders minus 3 points. Bet the game for free at one of the web’s top 3 sportsbooks that offers a 50% real cash bonus up to $250, the best live betting platform (bar none!) on the web, that gives rebates on ALL your bets, win, lose or draw AND that offers FAST hassle-free payouts —> Bovada Sportsbook!