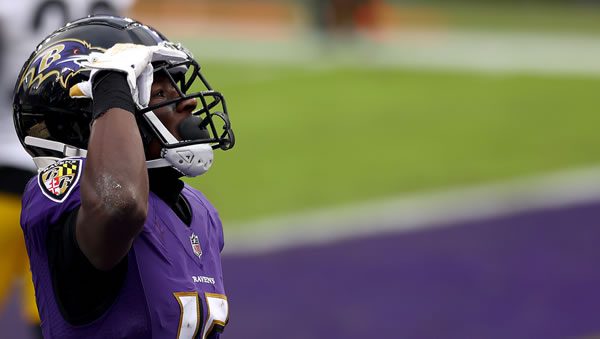 The Baltimore Ravens invade the shores of Lake Erie to take on the Cleveland Browns in a Week 14 AFC North challenge. Baltimore is off a disappointing loss to the Steelers, while the Browns are off their bye. The Betanysports (Home of -105 betting odds on sides and totals!) NFL board lists the Browns 2 point favorites with the over/under set at 42.5. Let’s look for the Browns to avenge their Week 12 loss to these Ravens and cover the short number. Here is the handicap.

Cleveland’s Rushing Offense Should Get On Track

The Browns offense has been hot and cold this year, with a lot more cold than hot lately. Cleveland’s rushing game is the foundation of their offense, and they will look to rebound from an off game in week 12 against these same Ravens prior to their bye. Cleveland has topped 100 yards 8 times on the season, and they are 6-2 in those games, and 0-4 in the games they have not reached the century mark. Nick Chubb is one of the elite backs in the league but got only eight carries for 16 yards in the Week 12 match-up with the Ravens. Chubb is averaging 5.8 yards per carry on the season, and he will be the focal point of the offense this week. Kareem Hunt returned in week 12 after missing the five weeks prior with a calf injury. Hunt averages 5 yards per carry and 8 yards per reception and should be 100% this week. The running game should set up some play-action passing opportunities for QB Baker Mayfield. Nobody needed the bye week more than Mayfield, and he should come out of it in better shape. He has been fighting multiple injuries that have affected his play, so look for a better performance this week.

The Ravens defense took another big hit last week. They lost their premier cornerback Marlon Humphrey to a torn ACL. Their secondary was already struggling when Humphrey went down, but it will be interesting to see how that impacts this week. Humphrey is a lockdown corner, and the Steelers had success throwing the ball after he left the game. Baltimore allows 4.0 yards per carry, good for 7th in the league. The Steelers managed 85 yards on the ground last week, and the Ravens have held all of their opponents under 100 yards since the Vikings topped that mark in week 9. I look for Cleveland to come out of their bye with a renewed dedication to the run. Chubb and Hunt should be able to get going behind a well-rested offensive line and open up some opportunities in the passing game.

Baltimore’s Offense Is a Mess

The Ravens topped 30 points in four of their first eight games but have not topped 20 points in their last 4. They have averaged only 15 points per game in the three games during that stretch that Jackson started. The Ravens offense has become very predictable with the lack of running backs to take the pressure off of Jackson. Defenses can match up with Baltimore’s receivers, there is no play-action element to the offense, so defenses really just need to shut down Jackson scrambling and Mark Andrews in the passing game. Davonta Freeman has emerged as the best of the Raven backs, averaging just over 4 yards per carry, but he is not someone the Browns will worry a lot about. Baltimore needs a spark to get their offense back on track, but Cleveland’s defense should be ready for them.

The Browns defense is the backbone of their team. They are tied for 5th in opponents yards per play and 11th in scoring defense. Myles Garrett is one of the premier pass rushers in the league, already recording 14 sacks, and will look to wreak havoc on Jackson in the pocket this week. Cleveland’s corners can match up the Raven receivers and allow double coverage on Andrews. The Browns held the Ravens to 300 yards in their week 12 contest but let Jackson burn them on the ground in the second half. Cleveland will look to clean up their containment of Jackson this week. They will make him beat them from the pocket and try and limit Andrews in the passing game. Look for the Browns defense to put on a good show in front of the Dawg Pound.

More Picks: Get Horne’s Falcons at Panthers Side & Total Lean >>>

It’s a Must-Win for the Browns

All four teams in the AFC North have a chance to be division winners, but the Browns chance will disappear if they don’t come away with a W this week. The Ravens currently sit atop the division but have been fortunate in multiple games this year and really aren’t playing any better than the other three teams. Cleveland should come out hungry after their bye and put it all on the line for their home fans. They came into the year expecting to fight for a division title, but they will fight this week just to have a chance to make the playoffs. On the other hand, Baltimore is coming off of a gut-punch of a loss against the Steelers. They have been ravaged by injuries all year and now have lost their best defensive player. The Browns are playing two consecutive games against the same team, so they still have the taste of the week 12 loss fresh in their minds, so we should get their best effort.

Play the Browns at Home

Lay the 2 points and count on the Browns to win and cover the number in front of the Dawg Pound. Bet your Ravens vs. Browns pick and ALL your Week 14 NFL bets for FREE by taking advantage of a 100% real cash bonus on your first deposit of $100 to $500 at GTBets Sportsbook!