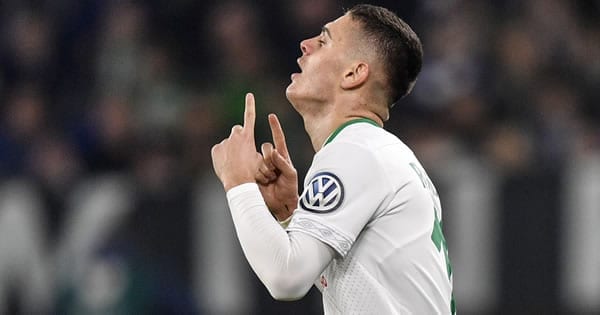 The teams drew 2-2 on October 26 at Bayer Leverkusen’s BayArena.

It’s now or never for Werder Bremen, as the proud club is going to need to pick up its play in a hurry if it wants to stay in the Bundesliga. The River Islanders find themselves four points back of the relegation playoff and eight points away from guaranteed safety, which means they’ve got a world of pressure on them as the season resumes. Their plight, however, hasn’t been helped by Bremen’s slow response to the virus compared to the rest of Germany, which delayed their return to their practice facilities.

For Bayer Leverkusen, there’s a different kind of pressure: they’re going for a return to the Champions League. The top four teams in the Bundesliga qualify for the top level of continental play, and Leverkusen sits two points out of that spot and four back of second place. There’s even a chance that Leverkusen could claim its first-ever Bundesliga title if it can keep its run of form going, as it sits just eight points back of league kingpin Bayern Munich. To make that happen, however, Leverkusen certainly can’t afford to be losing to the likes of Werder.

FREE LOOT! DEPOSIT $200 AND GET $100 FREE AT BOVADA! SEE OUR BOVADA SPORTSBOOK REVIEW FOR MORE INFO!

When they play at the BayArena, the Worker’s Eleven tend to be a fun, exciting squad that produces results. In their past nine matches, seven have gone into the winning column, including all four games at home. In contests at the BayArena, goals have come in bunches, as Leverkusen scored 13 in just those four home matches. But the results on the road have been a bit tougher to come by, as three of Leverkusen’s past four road fixtures have seen them score just once in each. They picked up three wins and a draw in that stretch, but two of those wins were by only one goal.

But the good news is the win that wasn’t by one goal was a 4-1 thrashing of Paderborn, the one team below Werder in the standings. Kevin Volland’s nine goals lead the Worker’s Eleven, and Lucas Alario has proven a solid No. 2 despite only starting nine matches this season. However, more often than not, Leverkusen’s defense has tended to leak when the going gets good for the offense. Six of Leverkusen’s past seven matches away from the BayArena have seen at least one goal for the opposition, and both teams have found the net in five of those matches. That’s the one drawback that comes with playing attacking, aesthetically pleasing soccer: sometimes, it can come back to bite you in the closing minutes.

A team’s home ground is supposed to be a fortress, but for Werder, the Weserstadion has been anything but. Only once have the River Islanders claimed victory at home this season, easily the worst home mark in the Bundesliga. They’ve lost six straight matches at home, and they haven’t scored a goal at home since November 23, a 2-1 loss to Schalke 04. It doesn’t get a heck of a lot better at the defensive end of the pitch, as Werder’s 55 goals conceded is the worst in the Bundesliga. Put simply, the River Islanders have more than earned their spot in the relegation zone.

The biggest problem for Werder is that its one star, Milot Rashica, doubles as both its leading goal scorer (7) and its leading setup man (5 assists). When your best scorer is also the man who creates the most goals, you’re not going to put many goals home, and that’s a big reason why Werder has managed to put home just two goals since the calendar turned to 2020. The only reason the damage hasn’t been worse for Werder is that its defense has been somewhat consistent, giving up two goals or less in six of its past eight home matches. But death by a few small cuts is still death, and if Werder can’t patch things up at the back or rediscover an attack, relegation is inevitable for a squad that’s played top-flight soccer for the past 39 years.

Given that Werder has failed to score at home in five matches and is now on 462 minutes of action without a goal at home, taking Leverkusen to win to nil at +230 seems like outstanding value here. I admit that I’m concerned about Leverkusen’s leaky defense on the road, but Werder has been so inept at finding the net that I’m not sure it’s going to matter. But if you’re worried about the Leverkusen defense conceding, you’ll get substantial value out of taking Leverkusen to cover the one-goal spread at +185. Even though Werder managed a draw on the road, the River Islanders were in much stronger form then. I can’t see Werder avoiding defeat in this matchup, so I’m willing to gamble on a two-goal win for Leverkusen here and accept a push should it be a one-goal margin.

Another bet I like is a “no” on both teams to score. Once again, the oddsmakers are banking on the leaky Leverkusen defense to give up a late goal in a decided match, which is why they’ve made “no” an underdog at +125. This comes down to which one you believe is weaker: the Werder offense or the Leverkusen defense. I don’t think the Werder offense is going to come back any stronger after the COVID-19 pause than it was when the break began, so I’m going to back Leverkusen to pull off the shutout at plus money.

Given my total lack of faith in the Werder attack, it should be evident by now that I’m picking the River Islanders to again fail to find the net. That and the consistent mediocrity of the Werder defense makes a correct score pick a more straightforward exercise than usual. Leverkusen has only scored one goal in three of its past four road matches, but none of those were against a defense as weak as Werder’s. To me, a 2-0 score prediction at +950 feels like the right way to go here. Bet your soccer picks FOR FREE by taking advantage of a special deposit $100 to $300 and get a dollar for dollar matching bonus at MyBookie! You must sign up through this special link and make sure promo code PREDICT100 is in the promo/bonus code box!