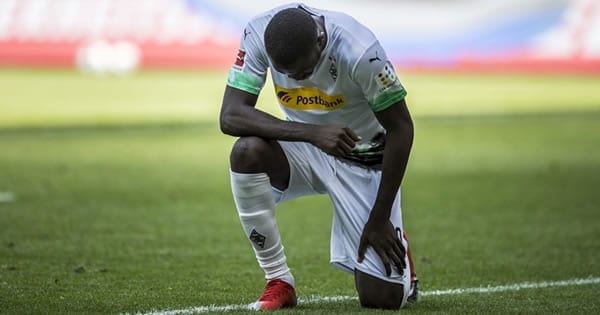 Why? The top four teams in the Bundesliga earn the right to play in the group stage of the UEFA Champions League the next season, which guarantees a team a prize of $15 million just for making it to the group stage. Team 5 gets sent to the Europa League, which comes with a guarantee of $2.9 million. Of course, that’s a lot better than nothing, but Monchengladbach has 12.1 million apparent reasons to try to win all five of its remaining matches and hold on to its place.

For Freiburg, that $2.9 million prize looks pretty good, but it’s a long shot. They’d need to get to sixth place to get there, and they sit four points behind both Wolfsburg and Hoffenheim with five matches to go. For now, Freiburg still has plenty to play for, which should make for a hotly contested game between a side that knows how to score (Monchengladbach) and a defensive-oriented home side (Freiburg).

Last week was cause for alarm for the Foals, as they lost to Leverkusen at home and followed with a draw against relegation-threatened Werder Bremen. But facing Union Berlin seems to be a tonic these days, as Monchengladbach bounced back well against the Iron Ones and took advantage of results around them to move back into fourth place. The Foals were aggressive and accurate, putting eight shots on target and finding the net on four of them. In short, they were everything against Union that they were not against Leverkusen and Werder.

To keep it going, the Foals need to keep Marcus Thuram going. Few in the Bundesliga have responded better to the restart than Thuram, who has found the net in three of Monchengladbach’s four matches since the restart and has four goals in that stretch after scoring twice on Union. If Thuram and Alassane Plea, who ended his scoreless stretch with a late goal against Union, are on form, the Foals will be on target to get a result from this match.

There’s no doubt that Monchengladbach badly needs it because the rest of the schedule is very unfavorable to them. Other than a match at likely-doomed Paderborn, the Foals’ remaining games are all against teams in the top half of the standings.

The good news for Freiburg is that they likely have nothing to lose at this point in the season. Freiburg is 11 points clear of the drop zone with five matches to go, so it’s likely going to clinch safety by the end of next week, whether it wins again or not. But thanks to Schalke’s utter collapse, Freiburg still has an opportunity if it can figure out how to hit the net more than once in a match.

In their past ten matches, Freiburg has either been shut out or held to one goal eight times. The only exceptions are Union Berlin, which seems to have mailed in the rest of the season since the restart, and Eintracht Frankfurt, which plays no defense whatsoever. Otherwise, Freiburg has mostly been toothless in its attack and solid on defense. In Freiburg’s past nine matches, seven have seen the teams combine for two goals or fewer, including three out of four since the restart.

If I were more confident in the Freiburg attack, I’d back Freiburg on a double chance here, as Monchengladbach still hasn’t really proven it can get itself going against good sides. But after a pair of home shutouts, I don’t see much reason to expect Freiburg to find the net. They looked somewhat directionless against Leverkusen, and they’re still yet to score at home since the restart.

Instead, I think this is a perfect time to play the under, which is sitting at +120. Monchengladbach is typically a high-flying side, but the attack hasn’t really been there against squads that play defense (read: not Frankfurt and Union). For all of its offensive shortcomings, Freiburg can really play defense, and I think this match looks pretty likely to have two goals or fewer. If you like Monchengladbach’s chances to win, taking the Foals and under 2.5 goals at +400 looks very appetizing to me. Bet your soccer picks for FREE by taking advantage of a special (no joke, only found here) 100% REAL CASH bonus on your first deposit of $100 to $300 at MyBookie Sportsbook (See our MyBookie Review for info on them). You’ll need to register for an account through this special link in order to get the bonus credited!

I know the first meeting between these teams finished at 4-2, but Monchengladbach was a different offensive side back then. The Foals haven’t been the same on the attack since the restart, and Freiburg still has enough to play for to give them plenty of motivation to play the kind of defense that has kept them in every match.

However, the attack remains a very weak spot for Freiburg, and given that they showed little sign of breaking down Leverkusen, I don’t see them finding a goal in this match. They’ve lost two previous games since the restart by 1-0, and I’m going to back a correct score pick of 1-0 to Monchengladbach as well at +825.