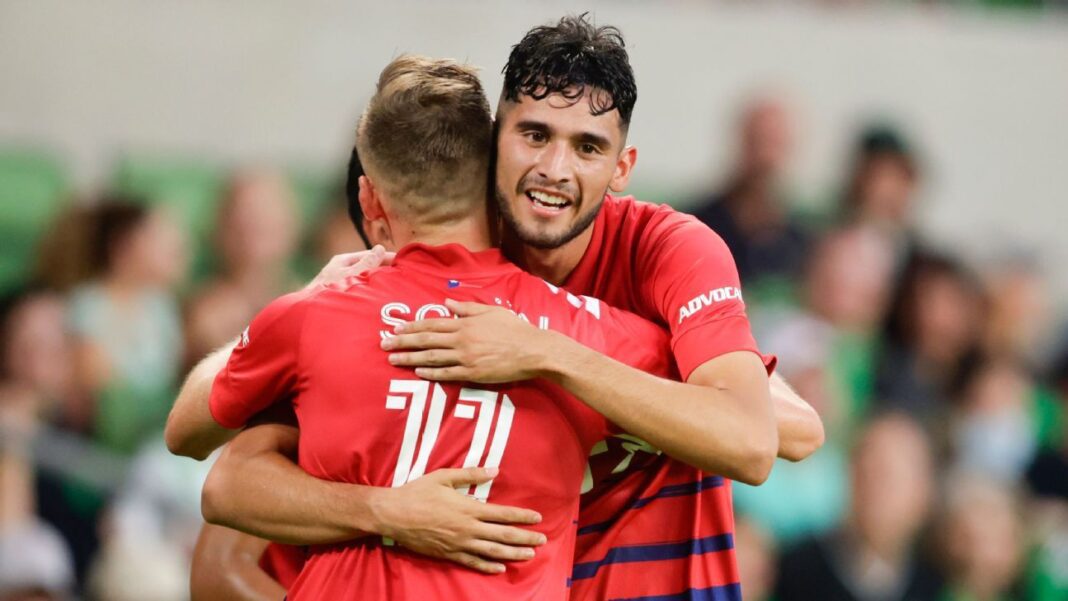 The sides drew 2-2 on May 22 at Toyota Stadium in Frisco, Texas.

Real Salt Lake is having a devil of a time trying to hold on to its spot in the playoffs, failing to win in five of its past seven matches. But the one thing that they’ve been able to do consistently is win in Utah, as they’re now riding a three-match win streak at their home ground and hanging on to seventh place and the postseason as a result.

But in this matchup, Dallas might not be such a cooperative guest. The Toros had been a disaster away from the Metroplex earlier in the season, but they’ve won two of their past four trips away and taken points in the other two, beating the likes of Sporting Kansas City and earning a hard-fought draw at Seattle. They’re also relatively comfortable playing at RSL: they’ve won two of their past four trips to Utah and earned a draw in another. Over their past ten meetings, Real Salt Lake has just one win against Dallas, holding a record of 1-4-5 against the Toros.

The worst thing about being a fan of MLS is the fact that, unlike virtually every other major league in the world, the league doesn’t take a break for international matches. If you’ve got a star who’s good enough to play for his country, you’ve just got to play without him for a game.

And that’s the hand that Dallas has drawn here, as young star Ricardo Pepi earned a call up to the USMNT, meaning he’ll be out for this match and the Toros have to find their offense from someone else. Pepi has struck for three goals in FCD’s past two matches, making him an excellent choice for the United States side, but Dallas has other talents who can find the net, namely Jesus Ferreira. The big thing Dallas will have to avoid is conceding in the final half-hour, as the 61st to 75th minute has been a huge problem for FCD in recent matches. In their past six matches, the Toros have conceded in that 15-minute stretch five times, which turned two wins into draws and turned a draw into a loss, a five-point swing that would currently have Dallas in the postseason.

RSL was a distracted team last week and played like it in Vancouver, getting shellacked 4-1 by the Whitecaps after former coach Freddy Juarez shocked the soccer world by deciding to step down as RSL coach to become an assistant for Seattle. Having a more normal week to get adjusted to interim coach Pablo Mastroeni should help, as should the return of midfielder Damir Kreilach, who was out because of yellow card accumulation. Kreilach played a significant role in the previous meeting between the sides, as it was his goal in the 86th that gave RSL a share of the points.

But the big issue is that RSL hasn’t been playing much defense as of late, as it conceded yet again on a set piece against the Whitecaps and has now given up four goals from set pieces in their past three matches. This is not a team that attacks well enough that it can survive giving up soft goals, and its past two defeats are rather concrete proof of that reality.

I think the under holds a lot of promise here, as RSL has been hit or miss with its attack, and Dallas is missing its best goal scorer. Beyond that, the draw has hit in three consecutive meetings between these sides, and I think there’s an excellent chance that the sides find themselves in another stalemate. Given that two of the past three have seen no goals at all, I don’t want to risk a result by calling for a score draw here, even though the +340 payout is tempting.

One bet I do want to gamble on is a goal to come between 61 and 75 minutes into the match at +135, and if you really want to get risky, I’d take RSL to find the goal there at +250. Dallas has been vulnerable in that stretch for the past several matches, and if the hosts do find a goal, this is when I think it happens.

RSL has played well at home as of late but hasn’t done well at all against Dallas in recent years. The past three matchups between the sides have all finished on terms, and with Dallas seemingly having things figured out on the road, I think there’s a good chance that the Toros end up taking something home with them.

Hey! The “other” football is about to start! Be sure to check out my co-workers free NFL game previews and picks before placing your wagers! Kevin West knows his stuff!