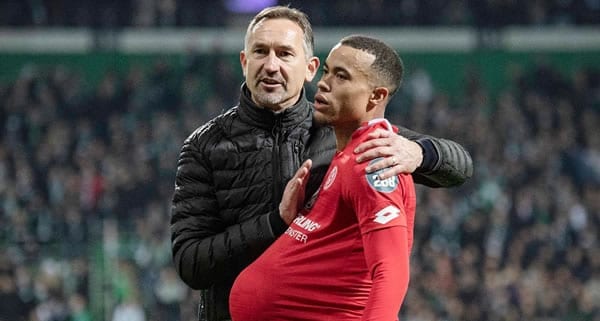 Champions League soccer is assured for Borussia Dortmund, and now they’ve got their sights set on clinching second place. Of course, the Black and Yellow would love to win the title, but given that even one win in three would clinch the crown for Bayern Munich, second place is likely where Dortmund will finish if it takes care of business.

On paper, that shouldn’t be a problem against Mainz, which has been genuinely wretched since the restart. But Mainz is desperate to save itself, as it now sits a mere three points above the relegation playoff and has to face relegation-threatened Werder Bremen on Saturday. The last thing that Mainz wants is to face a match where they’ve got to get a result in order to save itself, which makes this a critical game for the 05ers.

Mainz against the best teams in the Bundesliga has tended not to go well. Against the Big Five, Mainz is 0-8-0 this year, and only their match with Leverkusen saw them lose by less than a goal. There’s just a large gulf in talent between Mainz and the top sides, and it’s why Mainz hasn’t finished higher than 12th since 2016.

In order to get the result they need, Mainz has to find a way to get Robin Quaison going. For the year, Quaison has 12 goals, but not one of them have come since the COVID-19 pandemic. Without his scoring touch, Mainz has had to find other options. They’ve been a lot more successful at that on the road than at home, as they’ve now scored in three consecutive road matches and been shut out in all three of their home matches since the pause.

I’m not going to mince words here: Dortmund had absolutely no business getting a win over Dusseldorf on Saturday. That’s a strange statement to make about the Bundesliga’s second-best team, but Dortmund looked disinterested for 93 minutes and content to settle for a draw. That changed in the final minute of stoppage time when Norwegian teen Erling Haaland got himself on the right end of a beautiful cross and headed in the match’s only goal, giving Dortmund a win and locking up Champions League soccer for the Black and Yellow.

Now, how strong is their motivation for the rest of the season? Dortmund has little chance of catching Bayern Munich for the title, but it can still secure second place over RB Leipzig, whom it will face on the next matchday. The motivation wasn’t there against Dusseldorf by any stretch of the imagination, but Dortmund managed to escape, suggesting a bounce-back performance in this match. That’s been a major spot of trouble for Mainz, which has shown a tendency to get blown out by the Bundesliga Big Five.

Mainz has scored in three straight away matches, but I can’t see them extending that to four games here. Dortmund’s defense has been too good since the pause. Over the past 10 Dortmund matches, eight of them have seen one team get shut out, and the two exceptions were a goal from Bayern Munich and a questionable penalty awarded to Paderborn in a 6-1 win for the Black and Yellow.

Given that Dortmund whacked Mainz 4-0 earlier this year, I think taking Dortmund to keep a clean sheet here is the right decision. You’ll get +110 just to back the shutout and +125 on Dortmund to win to nil, so if you’re scared of the draw, you have a conservative way to play.
If you want to get risky, you could back Dortmund to win and under 3.5 goals in the match. This is definitely an aggressive strategy, as Dortmund is very capable of dropping a significant number, especially if it gets an early goal. But a quick turnaround and Mainz’s desperation for a point (even a point is likely enough for Mainz to save itself) means that Dortmund’s attack probably won’t be as sharp as usual. Given that Dortmund has won its past two matches by 1-0, taking Dortmund and under 3.5 at +150 could be a shrewd decision. Bet this pick for free by taking advantage of a “deposit $100 and get $100 free” offer at MyBookie Sportsbook! This is a REAL CASH bonus! Not a crappy match play offered elsewhere!

With three matches to go, it’s all about survival for Mainz, and that means that they’re going to try to defend as much as possible against a side like Dortmund. Expect Mainz to park the bus from the opening whistle and go for the scoreless draw that would all but guarantee passage to next season in the Bundesliga.