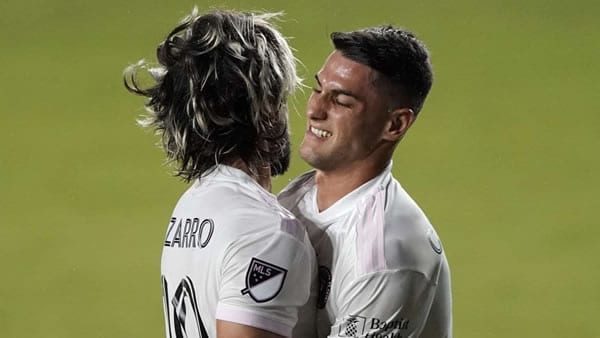 The sides have never met before in their history.

A pair of struggling sides meet for the first time ever, as Inter Miami makes the trip up Interstate 75 to take on Atlanta in a matchup that looks a lot more even than it did at first glance. Atlanta has looked nothing like the side that won MLS Cup two years ago, while Miami is going through the typical struggles that come with most expansion teams (LAFC notwithstanding). It’s hardly a shock to see Miami at the bottom of the Eastern Conference, but Atlanta is now in serious danger of missing out on the playoffs for the first time in its brief history, as the Five Stripes are now outside of the top seven and looking like a royal mess rather than a real contender. Can Miami notch its most famous victory yet against a wounded opponent?

If not for some poor finishing, Miami could be riding a two-match winning streak into this one. The Herons had no problem getting the ball into dangerous areas against Nashville, as they took 19 shots at the goal. The problem was that only five of those 19 attacks even forced Nashville keeper Joe Willis to make a save, as Miami shot ten attacks straight into the Nashville backline.

At this point, that’s both a positive and a negative for the Herons, who have been a defense-first team in their inaugural season but threw caution to the wind against Nashville and tried to go out and win the match on the road. It’s pretty problematic that Miami couldn’t find any way to finish its attacks, but at least they’re willing to be aggressive on the road rather than sit back.

That could play well against an Atlanta side that got hit in the mouth by Orlando and didn’t respond well at all. In all four of Atlanta’s defeats, the Five Stripes conceded the first goal, which means that Rodolfo Pizarro and Julian Carranza need to go to work early against a vulnerable defense. The duo has combined for five of the Herons’ six goals this year, but they’ll be at their best if Pizarro is setting up Carranza for goals, which has only happened once this season. For now, these are Miami’s only real goal scorers, and they’ve got to push Atlanta onto the back foot early if the Herons are to get a result.

BET YOUR SOCCER PICKS FOR FREE THIS WEEK! DEPOSIT $200 AND GET $200 FREE AT MYBOOKIE SPORTSBOOK!

The wake-up call has become a five-alarm fire for Atlanta United, which suffered its first-ever loss to Orlando City in a match where the Five Stripes really weren’t even all that competitive. Atlanta started the game against Orlando well, but after 10 minutes, the Five Stripes looked to be entirely out of ideas, allowing Orlando to take control of the match and force Atlanta to play long balls and hope. Needless to say, that proved to be utterly ineffective against a much-improved Orlando.

The result has made one thing clear: Atlanta’s flameout in the MLS tournament was no fluke. Unlike Seattle, which has proven that its two ugly losses in Florida were a result of not wanting to be in the bubble by ripping both Portland and LAFC, Atlanta really does appear to be the side that left Florida without scoring a single goal in three matches. That said, the Five Stripes have had no problems against the other expansion side, beating Nashville twice, and Miami has really been struggling to find the net outside of its three-goal explosion against Orlando. With a solid performance, this could be the boon that Atlanta needs to get back on track. On the other hand, another languid showing could be the end for interim leader Stephen Glass.

Miami has tended to be a first-half team this season. Of the Herons’ six goals, four have come in the first half, and none have come after the 50th minute of any match. That says that Diego Alonso really needs to get some new material for his halftime speeches because whatever he’s saying clearly isn’t working. But it also means that Miami is in the perfect position to jump on Atlanta, which has conceded within the first half-hour on four occasions out of seven.

As such, I’m going to go for the underdog and take Miami to win. Atlanta hasn’t come back from a deficit even once this year, and after getting their confidence shattered by Orlando, I don’t think the Five Stripes are mentally tough enough to overcome adversity. Without the support of the Terminus Legion behind them, Atlanta is very beatable at home, and Miami is clearly playing free and loose right now.

I don’t expect this to be a wide-open match. I think the under has a strong chance to hit, and I actually think taking Miami to win and under 2.5 (+625) has an excellent chance to occur. But with so many trends on the board that give us plus money, I don’t feel the need to get aggressive with my main bet on this match.