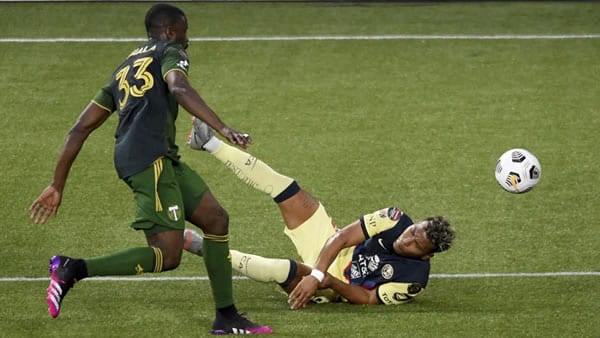 Point Spread: Seattle -0.5/Portland +0.5 (Bovada - The BEST live wagering platform on the web! Your credit card WILL work there for deposits and they offer a 50% real cash bonus too!)

The sides drew 1-1 on October 22 at Lumen Field in Seattle.

The greatest rivalry in MLS once again takes center stage, as the Cascadia rivals face off in the early goings of 2021. The Western Conference quite literally goes through these two teams, as the past six Western Conference crowns have all gone to either the Sounders (2016, 2017, 2019, 2020) or the Timbers (2015, 2018).

So far in 2021, only the Sounders look capable of making it seven straight Western Conference titles for the Cascadia duo, as they’ve earned the best record in the West through three matches. If not for a miscommunication on a free kick against Los Angeles FC, not only would the Sounders have a perfect three wins, but they wouldn’t have conceded a goal yet in 2021.

Portland hasn’t been anywhere near that level of consistency, and it might get worse before it gets better for the Timbers. Thanks to winning last year’s MLS is Back Tournament, Portland started the year in the CONCACAF Champions League, which means the Timbers will play a mid-week match against Mexican champion Club America before traveling to Seattle from Mexico City. Given that the Timbers didn’t show anything close to their best form against Dallas, this could be a real problem against a rested Seattle side that barely had to sweat against the Galaxy.

The Sounders have been notoriously slow starters under Brian Schmetzer, but this year, they’ve moved up the timetable and gotten off to a hot start. So far, the Sounders have outscored three opponents 8-1 and made Minnesota’s defense look inept during a second half in which they picked apart the Loons.

Making matters worse for the Sounders’ opponents is that they’ve done this without Nicolas Lodeiro or Jordan Morris. Morris is on the shelf for several more months, if not for all of 2021, but Lodeiro returned to action in the second half in the Sounders’ win over the Galaxy and instantly picked up where he left off by helping create the Sounders’ final goal of the evening. Seattle’s attack was already firing on most cylinders with Lodeiro on the shelf, and with the Sounders’ captain back in action, it’s going to be even more challenging for opponents to slow down this side.

The Sounders’ defense does remain a question mark, as they gave up far too many chances to the Galaxy and might have conceded against a better attacking side. But the back four has done what they’ve needed to do for the most part, and the Sounders have only conceded from a set piece in 2021.

Don’t read too much into Portland getting drilled by Dallas because the Timbers openly admitted that they threw that match away in order to keep their starters fresh for Wednesday night’s trip to Mexico City. With no fans allowed in the Azteca, an American team might never have a better chance to win the CONCACAF Champions League, and coach Giovanni Savarese made no bones about prioritizing that over a regular-season match with Dallas.

The problem is, the Timbers can’t do that this time around. Tossing a match against Dallas is one thing, but throwing away a game against ancient rival Seattle isn’t something the Timbers Army will accept, even if it’s to try to win the CCL. That means that a tired Timbers side is likely to arrive home in Oregon after playing Thursday night in Mexico City, and that means Portland is likely to try to play a defensive style in hopes of getting something out of the match.

When the Timbers are able to play in their preferred style, they’ve got a solid attack led by the likes of Eryk Williamson, who punished the Sounders in a 2-1 Portland win last year, and Diego Valeri, who has been a thorn in Seattle’s side throughout this rivalry. But with only three full days to recover from a physical match in Mexico, Portland’s not going to look anything like the way it wants to play this time out.

Portland is likely to come out and try to limit the number of scoring chances, but we’ve seen this film before. The precedent was set on August 23, when the Timbers flew home to face Seattle in their first match since winning the MLS is Back Tournament in Orlando. But while the Timbers had been using their energy in claiming a trophy, the Sounders had been recovering at home, and a well-rested Seattle promptly headed south to Oregon and flattened Portland by a 3-0 scoreline.

Given that the Timbers have even less time to recover this time around and the Sounders have looked excellent so far, I think this is the time to back Seattle to win to nil at +375. I can’t see Portland pushing for a goal unless it has to, as I think the Timbers are going to run out of gas the same way they did last time they were in this situation. If you’d rather not risk it, though, feel free to back Seattle to win and over 2.5 goals at +210. There’s a chance you’ll be leaving some money on the table, but getting more than double your return is nothing to complain about.

There’s a couple of props I like here as well: more goals in the second half at -105 and the Sounders to score more goals in the final 15 minutes at +260. Late goals are common in this rivalry, so much so that you’ve actually got to pay juice on a goal being scored in the final 15 minutes (-125). Three of the past four meetings have seen a goal scored in the last 15, and two of those saw the goal scored by Seattle. That includes the August 23 match, which saw the Timbers collapse from exhaustion in the second half and concede two goals in the final seven minutes.

Blowouts don’t often happen in this rivalry, but with the Timbers getting next to no rest before this matchup and the Sounders making only a short 182-mile trek down Interstate 5, the conditions are right for a repeat of August 23. The bottom line is, Seattle is playing better than anyone in MLS except for perhaps New England, and Portland’s got to use up most of its energy trying to win another competition.

Portland is a stronger side than it will show in this matchup, but there’s only so much the Timbers can do when they don’t have a chance to recover after a tough trip. With Seattle back to full strength, this has the potential to get very ugly. Portland’s pride will keep this close for a while, but not for 90 minutes. I’ll take the Sounders to replicate August 23 with a 3-0 win at +2200. Note: Not all odds are created equal! Pay less for favorites and get paid more on underdogs at BetAnySports Sportsbook!