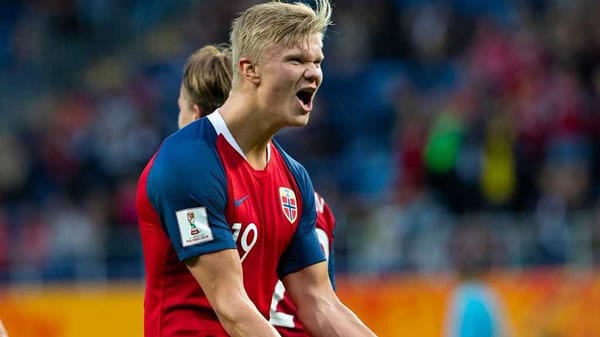 After waiting seven months, these teams finally get to complete their quest to qualify for next year’s European championships, which were supposed to take place this summer before COVID pushed the tournament back to next year so that fans might be able to attend. Both sides showed their rust last month in the Nations League, but the stakes are much higher here, as a win for either side means they’d be just one victory away from clinching a spot in the Euros and would get to play that last match on their home soil.

Before last month, playing on Norwegian soil would be a daunting task for anybody. Norway came into September, riding a 15-match unbeaten streak in Oslo, including all five of their Euro qualifying matches. But then Austria came to Oslo and beat the Lions 2-1, sapping Norway of its aura of invincibility at home. September was no kinder to Serbia, as the White Eagles were no match for Russia before playing out a scoreless draw against Turkey. Plus, Serbia hasn’t qualified for the Euros since 2000, when it was part of Yugoslavia. Can they find the scoring touch they lacked last month and get a result?

Heavy is the head that wears the crown, and heavy are the shoulders that carry both a club team and a national team, as is the case with Aleksandar Mitrovic. Mitrovic plies his trade for Fulham in the Premier League, and he’s the only one who’s really done anything for Fulham, which has been shut out in three of its four losses and got two goals from Mitrovic in the only match where they’ve scored. But Mitrovic doesn’t really get a lot of help when he puts on the Serbian shirt, as he scored the White Eagles’ only goal last month and is one of only four players on the Serbian roster that’s scored more than two goals in his international career.

That’s really the big issue for Serbia: it’s a team in transition that doesn’t really know whether it’s ready to move on to the next generation or whether the older generation still has anything left. Serbia didn’t look great in qualifying, and the defense, in particular, appeared to be a mess. In eight matches in qualifying, both teams scored in seven of them — a rather putrid performance considering the White Eagles shared a group with decided non-powers Lithuania and Luxembourg. In short, this team cannot play defense.

If you’ve been watching Borussia Dortmund in the Bundesliga, you already know about Norway’s brightest star. Erling Haaland hasn’t had a lot of time to make his mark on Norway’s national team, but the 20-year-old certainly made the most of it, scoring three goals in September to firmly establish himself as the Lions’ top attacker. Haaland’s presence makes Norway a much more dangerous side than it’s been in years past, as the Lions can now boast two genuine scorers in Haaland and Jordan King, who averages one goal every three matches.

But like Serbia, Norway is not strong at the back. In nine of Norway’s last 12 matches, both teams have found the net, and the lone exceptions were two wins over the Faroe Islands and a victory over Malta, neither of whom are known for their scoring. The win over Northern Ireland was vintage Norway, as the Lions’ attacking prowess was on full display while their defense struggled to control the match. Within seven minutes, it was already 2-1 to Norway.

Norway is an up-and-coming squad, while Serbia’s best days seem to be behind it for the time being. With that being the case, I feel pretty good about taking Norway to grab a win in this matchup. But I think we can do better than that, given these teams’ lack of penchant for defense. I really like the idea of taking Norway and both to score at +475.

One of Norway’s most significant weaknesses is that its goalkeepers don’t get a lot of time at their teams and are often out of practice. Two of Norway’s top three keepers are backups for their club teams, and the third competes in the Norwegian Eliteserien, not considered to be one of the world’s top leagues. As such, they’re often ill-prepared for the saves they need to make at this level, which means a goal is likely.

If you want to get more aggressive than that, you can get +875 to take Norway and over 3.5 goals, and I actually think there’s some real value there. This is a winner-take-all match, which means that if one team goes down in the last few minutes, they’ll throw everything at their opponent to try to get the game tied. That often opens teams up to a late attack, and if it happens, the reward could be a huge payoff.

Finally, I’d take the second half the feature more goals. Serbia is a second-half team, and desperation usually leads to more goals coming late. At +120, this is a solid value bet.

I really like Norway, and I think they’re going to be a fun team to watch over the next few years. I think there’s a good chance that Haaland gets some open space early and finds an early goal to allow Norway to dictate the tempo for the rest of the match. However, I think Serbia can find a marker at some point, and it’s probably going to be with Mitrovic. I’ll take Norway to earn a 3-1 win at +2200. Note: Many soccer bettors have been upset about the loss of 5Dimes Sportsbook. Most aren’t aware that you can still bet on games at reduced odds! You can still find the same great wagering odds and platform at BetAnySports!