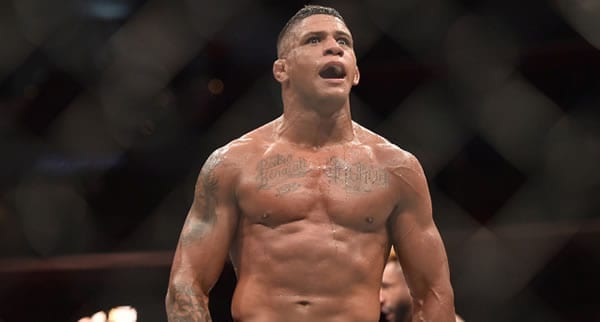 The UFC comes back to Vegas, just on a reduced level without the usual fanfare, as top welterweight contenders Tyron Woodley and Gilbert Burns tangle in the main event. The bout will be held at the UFC Apex facility in Vegas, as the UFC continues to find a niche in these bizarre times. And it’s really a gift to the fans, who should await with eagerness what looks to be an interesting and entertaining 170-pound battle. Can the former champion Woodley get back on the winning track and re-enter his name among the top dogs at welterweight? Or will Burns cement his contender status with a big win? Let’s break it down.

Former UFC Welterweight Champion Tyron Woodley battles contender Gilbert Burns in 170-pound action from Las Vegas. The card will be held at the Apex Center, a facility for training in the city, as arenas are off-limits during the pandemic. It is a high-stakes bout, and in the crowded welterweight division where opportunities are few and far between, the winner will be on the precipice, while the loser will have to work his way through a crowded pack. Expect that urgency to be reflected inside the octagon on May 30.

An important consideration for the purposes of handicapping this fight is the disparity in Q-rating between the two men. With Woodley, we have a former champion with a half-dozen high-profile championship bouts under his belt. He has been in some memorable matches and is a much more well-known commodity as a result. With Burns, you have a fighter who is known to hardcore MMA enthusiasts but remains somewhat anonymous outside that realm. But let’s look at what he has been able to do in recent outings, and it might be eye-opening.

While Woodley has been on the shelf following his lopsided loss in his title-loss to Kamaru Usman, Burns has been active. His last fight was revealing, a KO over former top contender Demian Maia in a co-main event slot in March. He is active, and he is winning, with the Maia triumph being his fifth straight win, as the 33-year old climbs the ranks. He can finish fighters with strikes, while also being a high-level BJJ practitioner and submission grappler who has competed with honors in those disciplines.

So sure, we know of Woodley’s exploits. But let’s wrap our heads around the true level of menace that Burns represents. He is hungry, and after some rough patches, he has worked hard to re-establish some good momentum with this latest win-streak. He is striving to improve and see if he has what it takes in this business at the highest levels. The Brazilian has a vast toolbox, having won fights in the UFC by decision, KOs by punches, while also winning by armbar and chokes.

But the very fact that he is more unknown brings to light some issues that could hurt Burns’ chances. One of the reasons he’s more low-profile is because this is his first main event fight. And to make it harder, it is his first fight against a man who has worn UFC gold around his waist. Those are a few tough barriers to break through for a fighter like Burns. Will the pressure get to him? Will the jump in competition and fighting in a five-rounder in this odd setting get to him?

At 38 and inactive since dumping his strap to Usman in March of 2019, Woodley is in a strange spot perceptually for a fighter who is one bout removed from being the UFC champ. It seems like he is regarded as yesterday’s news. Whether it’s the inactivity, the lopsided nature of his loss to Usman, or the fact that he was never that high on the entertainment meter, people seem to want to sleep on him. Whatever the case, his name doesn’t come up as often as one would expect when the future of the 170-pound division is discussed.

With both of these fighters, we have a pair of guys who excel in a number of areas. Burns’ submission prowess has been well-documented, while Woodley is a former top collegiate Division I wrestler. However, both men are very handsy nowadays, eschewing the other disciplines so they can stand and trade. In this area, we have two capable fighters to be sure, but only one has seen his hands rule the day at a high level and that is, of course, Woodley.

And while Woodley’s overall entertainment-factor has suffered as a result, he’s very adept at negating what his opponent does best. He’s a smart fighter, who doesn’t engage his opponent along unfavorable lines. This might come to the dismay of fans who seek action, but it allows Woodley to pick his spots, exploit advantages while preventing his opponent from ever really getting on a roll.

In other words, Woodley has shown he can manufacture wins in tough conditions. He has won as an underdog several times, quelling the offense of some pretty offensively-gifted fighters over the years. He knows how to hang in there and win a war of attrition in a 25-minute battle. To put it another way—he has already done what is being asked of him in this fight, while Burns has not.

Burns is dangerous and being a little under the radar might give him a little extra value. But the one-punch power of Woodley, in addition to his edges in strategy and experience, seems to make him the more-bankable choice. In a fight that is hard to pick on the surface, those things could matter. Burns is a definite threat, but I see Woodley finding his way to the winner’s circle in this one.

My Pick to Win: I’m betting on Tyron Woodley at -190 betting odds. While dangerous, Burns should be in Woodley’s wheelhouse. The experience-factor could be big here, as will the urgency of Woodley, who needs this fight to remain a viable force at 170. Bet your UFC picks for FREE by capitalizing on a special “Deposit $100 to $300 and get a dollar for dollar matching real cash bonus” at MyBookie Sportsbook! You must use this special link to activate the offer.