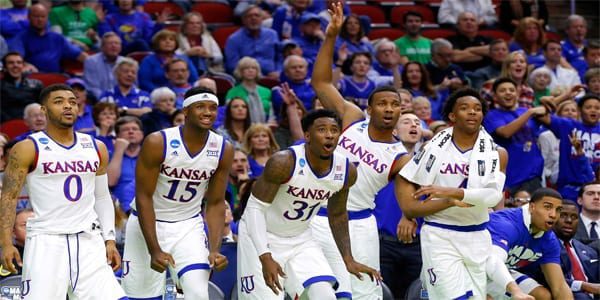 Contrary to their football counterparts, the Oklahoma basketball team knows how to play defense and plays it pretty consistently. The Sooners rank seventh in the nation in field goal percentage defense and regularly make teams work in order to get their shot. Just as important to the Sooners’ strategy of forcing bad shots is cleaning up after them. Oklahoma ranks eighth in rebounding, behind the strength of forward Brady Manek and guard Christian James, who combine to grab 15 boards between them. In short, the Sooners make their opponents work for everything from start to finish, and that’s been their hallmark throughout the season.

Has Kansas gotten itself back on track after the loss to Arizona State, or was that merely a product of playing a lesser foe in Eastern Michigan? Though the Jayhawks have been winning as usual in the non-conference slate, they’ve seemed to be a little bit off at times, and it’s made them difficult to bet throughout the season. However, this is traditionally the time when Kansas starts to put everything together and steel itself for another run at the Big 12 championship, which hasn’t left Lawrence since Bill Self’s first season at Kansas. If Kansas is going to win its 15th straight league crown, this is a must-win contest.

Allen Fieldhouse. Oklahoma hasn’t beaten Kansas at Kansas since 1993, which was 26 years, three coaches and a conference ago. Since that game, there have been close losses, blowout losses and even an overtime loss, but the ultimate result has been defeat for the Sooners on 17 consecutive trips to Lawrence. Of course, Oklahoma is far from the only team that’s had trouble winning at Kansas, as many teams are beaten before they even step on the court at Allen Fieldhouse. The Sooners have to put their horrible history at KU out of their minds, or this is going to be another wasted trip up the Kansas Turnpike

Oklahoma Will Cover if:

The Sooners can assert their will on defense. Oklahoma isn’t good enough with the basketball to win a scoring contest with Kansas, nor do the Sooners shoot free throws well enough to take advantage of the Jayhawks’ weakness at the stripe. Instead, Oklahoma’s path to victory relies on frustrating Kansas and forcing the Jayhawks into mistakes. Kansas has shown a tendency to make dumb errors out of frustration in the non-conference, and a smart defensive team like Oklahoma has the ability to take Kansas out of its comfort zone and force the Jayhawks into the kinds of mistakes that can cost them the game. The Sooners have to be locked in and ready to win a low-scoring battle in order to get a result.

Kansas Will Cover if:

The Jayhawks can establish Udoka Azubuike and take control of the glass. That’s usually not a great strategy against Oklahoma given how well the Sooners rebound, but the Jayhawks have a weapon in Azubuike that the Sooners don’t have an answer for, given his 7-1 frame compared to Manek’s 6-9 height. If Azubuike is ready to play for a long stretch of minutes after his return against Eastern Michigan, Kansas can turn Oklahoma’s strength against it.

Dan’s Pick to Cover the Spread: Kansas hasn’t been a consistent team in terms of dealing with the spread, and that’s what matters when you’re trying to win a bet. But I’m still going to take the Jayhawks here because of the kind of game this matchup is.

Kansas doesn’t get beat often against conference foes at Allen Fieldhouse, and other than Texas Tech, this might be the Jayhawks’ stiffest competition for another Big 12 crown. The Jayhawks are just a different team inside Allen Fieldhouse, and while the Sooners have three true road victories this year, Northwestern, Texas-San Antonio and Texas-Rio Grande Valley don’t provide anywhere near the intimidation factor that Lawrence does.

Plus, there’s the fact that Kansas is not afraid to play Oklahoma’s game. The Jayhawks defend just about as well as the Sooners do and they’re accurate shooters on offense. That combination is unlike anything Oklahoma has seen this season, and I think it’s going to be too much for them in their first game of 2019. I’ll bet my bitcoins on the Jayhawks to cover eight points, and I think the under has to be a strong play as well.