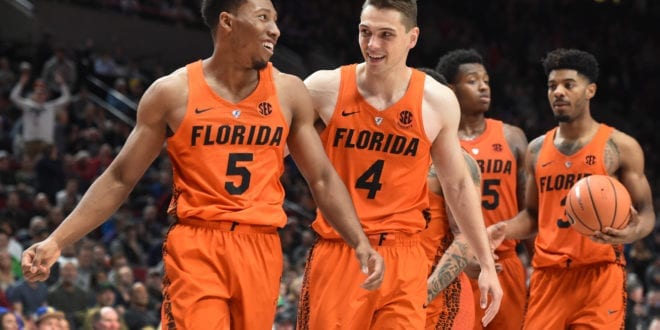 Last Time Out: Florida lost to Auburn 65-62 in the SEC Semifinals; Nevada lost to San Diego State 65-56 in the Mountain West Semifinals

The Gators have had a rough season to put it lightly, but a deep run in the SEC tournament gave them the extra push to be considered an eventually chosen for an at-large bid. This mainly came from their upset win over the top-seeded LSU Tigers in the quarterfinals of the conference tournament. The Gators will have a bad taste in their mouth after the way they ended up losing to the eventual champ, the Auburn Tigers. Who knows what could have happened in the final seconds of the semifinal game if Florida had been given the call they deserved, but regardless the Gators are in the tournament and will have a chance for redemption.

The Wolfpack had another amazing season, losing only 4 games in total. They did however, take a hit when they were upset by San Diego State in the Mountain West semifinals. This game showed that the Wolfpack are shaky at times and if they do not get hot, they will struggle all game long. Now back in the tournament as a 7-seed, there are no easy games ahead, with a potential meeting with the 2-seeded Michigan Wolverines over the weekend, also standing in front of the Sweet Sixteen.

These teams have never met.

They limit their turnovers and have several double-digit scorers. Turnovers were probably the biggest killer for the Gators as they had 18 in the game with the Auburn Tigers. Their shooting was spectacular however as they went 23 of 38 from the field at 60.5%. Another problem they had was only two players scored more than 10 points. This being Kevarrius Hayes and Jalen Hudson. Their leading scorer, KeVaughn Allen, was surprisingly quiet as he only managed to score 9 points on 3 of 6 shooting. For the Gators to go blow for blow with this high-powered Nevada offense, they will need at least 3 or 4 guys consistently scoring the ball.

Nevada will Cover if:

Cody and Caleb Martin both play a good game. The Martin brothers have obviously been the leaders for this Wolfpack team and between them they lead the Wolfpack in nearly every offensive stat. Caleb leads the team in points per game (19.2) and steals per game (1.4), while Cody leads the team in assists per game (5.1) and field goal percentage (49.8%). In the semifinal of the Mountain West conference, Cody led the team with 16 points, but struggled from the three-point line, going 2 of 7. His brother, Caleb, scored just 8 points in this game and went 3 of 10 from the field. In fact, in 3 of their 4 losses this season, at least one of the Martin brothers have failed to score more than 10 points. Thus, proving why both need to be scoring if they want to continue winning. Especially in a one and done tournament like this, one bad shooting performance will sink the Wolfpack into a hole they will not be able to climb out of leading to a round one exit.

Matt’s Pick for Florida vs. Nevada:

MyBookie has the Wolfpack laying 2.5 points to the Gators, while the total is set at 133.5. With how Florida lost in their last game, they are not going to go down easy, which has me leaning toward the Gators to cover. Nevada has been awful against the spread as discussed, so while they should win this game, it easily could come down to the last possession. Therefore, back the Gators plus the points.

Bovada Sportsbook - A Top Choice in 2019

Bovada Sportsbook launched in 2001. From the beginning, priority was given to user experience. Most online sportsbooks used one of three out of the box software platforms for their user interface. Bovada spent millions creating its own from the ground up. Its support team was also a focus. It was so good and friendly, that customers would routinely call to chat about the games when they didn’t really need any assistance. Bovada eventually had to incorporate limiting casual conversation into their employee training because players enjoyed using customer service for the social element. To this day, Bovada remains focused on a fun experience for their bettors. That includes simple bonus plans like the current offer of 50% CASH Bonus to start the football season.