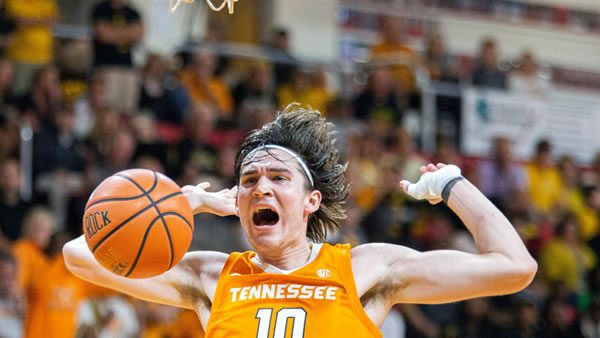 It’s the return of Rick Barnes to Austin, as the Tennessee coach makes his first trip to Texas since the Longhorns parted ways with him in 2015. To say that move hasn’t worked out for Texas would be quite the understatement, as the Longhorns fired Barnes for failing to reach the Sweet 16 seven years in a row (but making the tournament in six of those years). Since then, Shaka Smart has come to Austin and left Austin after failing to win so much as a game in the NCAA tournament, and Chris Beard has moved from Texas Tech to Texas to try to get the program back to where Barnes had it before he took on a different shade of orange.

Texas is beginning to take on the image of Beard’s teams in Lubbock, as it’s becoming a defense-heavy squad that wins when it holds teams in the 50s. The Longhorns actually haven’t beaten anyone all season that scored more than 59 points against them, even losing at Seton Hall when they held the Pirates to 64 points. Texas basically has to play tough defense to get wins, but the Longhorn defense isn’t quite there enough on a consistent basis.

Tennessee’s defense isn’t quite that level of talent, but the Volunteers tend to play to the level of their competition. They know how to handle good defenses, as they managed to get a 64-50 win over LSU at home, and they can deal with talented offenses, boasting a home win over Arizona. But everything they’ve done well has taken place at home, not on the road. Tennessee hasn’t proven that it can get the job done outside of Knoxville, as it got hammered in Lexington against Kentucky. Getting a win here would be huge for the Vols to establish that they’re really as good as their record suggests…but can they put aside distractions to get it?

Getting off to a slow start has been a problem for Tennessee at times, and it showed up again in its most recent game against Florida. Against the Gators, the Volunteers were able to overcome the early hole and come out with a 78-71 win (falling short of the cover, however). Against Kentucky, however, the Volunteers never got going and never got anywhere close to challenging the Wildcats.

This is going to be about guard play for Tennessee, as the Volunteers rely heavily on Santiago Vescovi and Kennedy Chandler to both provide points and set up baskets. Both do a good job with ball movement, and both force a fair amount of turnovers, as the Vols averaged 10 steals a game as a result of their guards’ work on defense.

The interior game is a little weak for Tennessee, as John Fulkerson really hasn’t taken over the way that he did a year ago. Tennessee instead counts on all of its players to grab rebounds, with everyone grabbing somewhere between three and six rebounds per game. There’s not anything Tennessee does well on offense, but there’s also not anything that’s really a glaring weakness.

The way to get the Longhorns under control is to force them to try to beat you from the outside because they really aren’t able to hit much of anything from deep. None of the Longhorn starters hit more than 36 percent of their shots from deep, and the team only shoots 33 percent from deep. In fact, Texas doesn’t really do much of anything on offense, preferring to instead focus on locking down other teams and doing just enough to get the job done at the hoop.

Timmy Allen is the leading scorer for this team at just 11.9 points per game, and much of that comes from taking good shots near the hoop and getting to the line. In fact, that is the one thing that the Longhorns do well on the attack: they get to the line regularly and do not waste their opportunities. Texas has nine players who shoot 71 percent from the stripe or better, so if this team gets ahead, it’s not losing the lead.

Tennessee will Cover If: The Volunteers can get off to a good start and force some Texas mistakes. If Tennessee gets in a hole early, it’s going to have a hard time coming back against this defense. The Vols have to be ready from the word go here.

Texas will Cover If: The Longhorns can take care of the basketball. Tennessee is going to be hard-pressed to make shots out of something if it can’t force Texas turnovers, so if the Longhorns can handle Tennessee’s swarming defense, they’ll have a much better chance to win.

Texas’ defense has been locking down some teams, but Kansas State and Iowa State were both able to get into the 60s (and Iowa State even managed to get to 79 against the Longhorns). I think Tennessee can get to 62.

The fact that Texas hasn’t beaten anyone all year that it’s allowed to get to 60 and Tennessee’s point total is above 60 says that the Volunteers are likely to be the way to bet. It’s not going to be easy given Tennessee’s struggles on the road, but I’m not sold on Texas at all. Give me the Volunteers and the points. Sportsbook account balance running low? Don’t re-deposit and get 10% or NOTHING with your bookie! Grab one of MANY 100% bonuses at one of our top tier books!