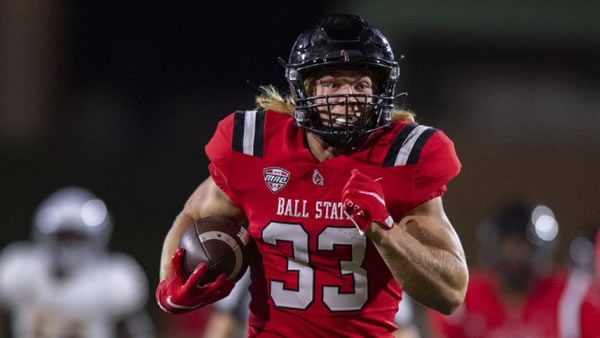 The Cardinals are going for another win, as in their last game, they defeated Kent State,
despite entering as the betting underdog. In the win, Ball State completed 63.4% of their 41
passes, 2 of which resulted in touchdowns. On the ground, the team ended with 1 rushing touchdown
while averaging 5.2 yards per carry for a total of 196 yards.

John Paddock heads into the game as the team’s top quarterback, with a current passer rating
of 81.84. So far, he has completed 225 passes for a total of 2207 yards. Wide receiver Jayshon
Jackson, has come up with the most production for the team, with a total of 735 receiving yards.
The Cardinals have turned to running back Carson Steele a total of 221 times for a total of 1092
rushing yards.

This year, the Rockets have an overall record of 6-3. In addition, they have also played well
in the Mid-American, going 4-1. This season, the Rockets have been favored in 7 games while
posting an ATS mark of 4-4-0. Their average over-under betting line is 49.33 leading to an
over-under record of 5-3-0.

In their previous game, the Rockets picked up a 27-24 home win over Eastern Michigan. This was
an impressive victory as they were also the 4.5-point underdogs. The team finished the game by
throwing for 3 touchdown passes. Overall, the Rockets had 238 passing yards on a completion
percentage of 55.6%. In the rushing game, the Rockets did not find the endzone, while finishing
with a total of 136 yards on the ground.

Heading into the matchup, DeQuan Finn has an overall passer rating of 93.9 on a total of 1642
yards. Thus far, he has thrown for 18 touchdowns and 9 interceptions. But, leading up to the
game, he is listed as questionable on the injury report (Upper Body). So far, the team’s most
productive wide receiver is Jerjuan Newton, who has caught 30 passes for a total of 554 yards. In
the run game, Jacquez Stuart has accumulated 521 on 86 attempts to lead the team.

When looking at their past 5 road matchups, Ball State has an ATS record of 2-3-0 while
averaging 21.2 per game. The team went 2-3-0 overall in these games.

Toledo has played well in their previous 5 home games, going 4-1-0 straight up. In this
stretch, they averaged 41.2 points per game while allowing 17.8. The team also performed well vs
the spread at 3-2-0.

More Picks: Get our NIU/WMU betting analysis and free pick against the spread for 11/9/22

Heading into this week’s matchup, the Cardinals will look to improve their offensive output,
as they are ranked just 91st in the NCAA in points scored and are facing a Toledo defense that is
allowing an average of 26.89 points per game.

So far, the Ball State offense is averaging just 148.0 yards per game on the ground. This
production has come on an average of 35.78 rush attempts per game (73rd). This week, the
Cardinals will be facing a defensive unit ranked 130th in rush yards allowed per game. This year,
they have averaged 157.25 yards per game when facing defenses ranked outside the top 50.

So far, the Rockets are averaging 35.89 points per game on offense, which is good for the 25th
most in college football.

On the other side, they are matched up with a Ball State defense that is allowing an average
of 27.22 points per game and has had its problems getting off the field on third down.

Although the Rockets have turned to the passing attack at a below-average rate this season,
they have an opportunity to find success through the air vs a defensive unit allowing teams to
complete passes at a rate of 56.36%.

So far, the Toledo offense is near the NCAA average in rushing, averaging 187.89 yards per
game on the ground. This year, they have handed the ball off an average of 39.89 times per game,
placing them 31st in the country. This week, the Rockets will be facing a Ball State defense that
is ranked 161st in rush yards allowed per game. So far, they are averaging 187.89 yards per game
when facing defenses ranked outside the top 50.

Ball State +11.5. Note: A lot of bettors got smoked this past weekend. If this is you, instead of re-depositing and getting nothing or some tiny re-load bonus, consider grabbing a 100% real cash bonus up to $300 by using promo code PREDICT100 at MyBookie Sportsbook! Already got an account there? We’ve lined up more 100% bonuses for you on our sportsbook bonuses page!