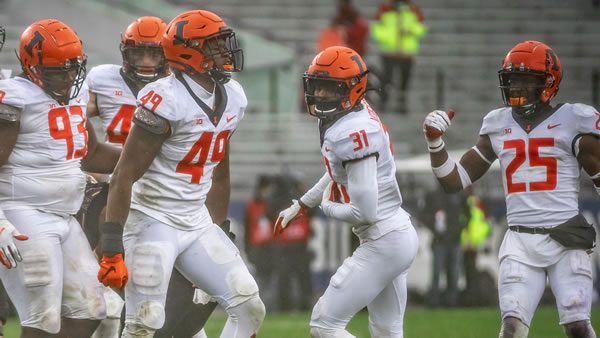 Point Spread: Hawkeyes +4/Fighting Illini -4 (GTBets – 125% bonus when you use bonus code PREDICTEM and get a FREE half point every time you bet your favorite teams!)

The Hawkeyes are coming into the game with a 1-1 record in Big Ten play. Their overall record
is 3-2. This season, the Hawkeyes have been favored in 4 games while posting an ATS mark of
2-3-0. Their average over-under betting line is 39.1 leading to an over-under record of
1-4-0.

The Hawkeyes dropped their last game to Michigan by a score of 27-14. Iowa entered action as
10.5 point underdogs at home. In the game, Iowa finished with 1 touchdown through the air, while
throwing for 246 yards. On the ground, the team ended with 1 rushing touchdown, while averaging
1.5 yards per carry for a total of 35 yards.

Quarterback Spencer Petras comes in the game having completed 69 of 125 passes for a passer
rating of 72.42. Overall, he has a total of 770 passing yards. Wide receiver Arland Bruce IV, has
come up with the most production for the team, with a total of 139 receiving yards. The Hawkeyes
have turned to running back Kaleb Johnson a total of 41 times for a total of 206 rushing
yards.

In their previous game, the Fighting Illini picked up a 34-10 road win over Wisconsin. This
was an impressive victory as they were also the 6.5-point underdogs. Illinois ended the game with
a total of 167 passing yards on 24 attempts. However, they did not find the endzone. The team
ended the game with 4 rushing touchdowns, along with a total of 137 yards on the ground.

So far, quarterback Tommy DeVito has a passer rating of 105.1 while completing 106 of his 152
attempts. So far, the team’s most productive wide receiver is Pat Bryant, who has caught 18
passes for a total of 313 yards. The top option in the run game for the team is Chase Brown, who
has carried the ball 120 times for a total of 733 yards.

Through their last 5 road contests, the Hawkeyes’ offense has averaged 19.2 points per game
while allowing an average of 18.0. Iowa posted an overall record of 3-2-0 while going 2-2-1
ATS.

Illinois has gone 7-3-0 over their last 10 contests, including posting an ATS record of 8-2-0.
On average, the team scored 26.5 points while allowing 13.3, leading to a positive scoring
differential.

Heading into this week’s matchup, the Hawkeyes need to pick things up on offense as they are
just 122nd in the NCAA in points scored. One area in need of improvement is their ability to move
the chains on 3rd downs.

One thing working against Iowa is the fact that they struggle to move the ball in the passing
game and are facing a defense that is just outside the top 25 in sacks per game.

So far, the Iowa offense is averaging just 88.2 yards per game on the ground. This production
has come on an average of 31.6 rush attempts per game (110th). This week, the Hawkeyes will be
facing an Illinois defense that is ranked 4th in rush yards allowed per game. So far, they are
averaging 69.75 yards per game when facing top 25 rush defenses.

Heading into this week’s matchup, the Fighting Illini will need to be on top of their game, as
so far they are a below average scoring offense and have a tough matchup against Iowa.

Offensively, Illinois will need to do a better job picking up first downs in this week
matchup, as not only are a below-average team in 3rd down conversion percentage and are facing
one of the top scoring defenses in the NCAA.

Early on, Illinois is averaging 43.8 rush attempts per game, good for 29th in the country. In
terms of production, they are 13th in yards per game at 195.6. This week, the Fighting Illini
will be facing an Iowa defense that is ranked 28th in rush yards allowed per game. So far, they
have not faced a defense ranked inside the top 50 rush defense.

Illinois -4. Did you know that you could be betting on games at -105 odds instead of -110? Stop overpaying and wasting your hard earned money today! Make the switch to reduced juice football betting at BetAnySports!