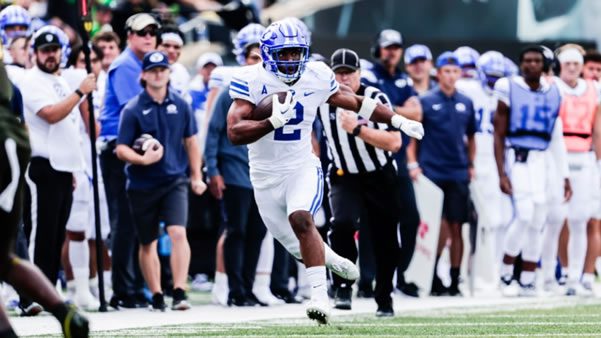 Point Spread: BYU +3.5/ND -3.5 (GTBets – 125% bonus when you use bonus code PREDICTEM. They’ll give you a free half point everytime you bet your favorite teams too!)

The Notre Dame Fighting Irish take on the BYU Cougars on Saturday in a primetime showdown near the south side of the strip in Las Vegas. This will be the ninth ever meeting between the teams, with the Irish holding a 7-2 edge, including wins in the last three in a row.

After a disastrous 1-2 start to their season that included a home loss to unranked Marshall, Notre Dame has been able to get their season back on track with victories over California and North Carolina prior to their bye before BYU. The Cougars are one of four remaining teams on the Irish schedule that currently find themselves ranked (Syracuse, Clemson, and USC are the others), so there is still plenty of work left for Marcus Freeman and the Irish to get done to prevent things from spiraling out of control and ending up with only their second losing season since 2007.

After scoring just 48 points combined through their first three games, Notre Dame’s offense was able to find its stride against North Carolina with a 45-point outburst. Quarterback Drew Pyne continued to prove he was the best choice all around to lead the offense, and on the season has completed 70% of his passes while throwing six touchdowns compared to only one interception. The BYU linebackers led by Ben Bywater will likely give extra attention to Pyne’s favorite target in tight end Michael Mayer, and the Irish quarterback will hope to continue his recent success of spreading the ball around, with four of his five touchdowns having gone to different players over the past two games.

The aforementioned Michael Mayer continues to blaze a path toward the NFL, having consistently shown off his ability as both a receiver and blocker as well, which makes him arguably the top prospect at his position. Mayer leads the team in receptions, yards, and touchdowns, though thankfully, wide receiver Lorenzo Styles has begun to form a connection with Pyne as well, which should only help provide additional space on the field for Mayer and others to get open.

Another reason for the Irish mini win streak has been the commitment to Audric Estime and the run game. The power back has rushed for 210 yards and three scores over the past two weeks, and his bruising style has given the offense something to rely on in the second half when the opposing defense is more worn out and not as able to take on a full steam ahead Estime. In addition to Estime, speedster Chris Tyree provides Notre Dame with a change of pace out of the backfield while also giving them a more multifaceted option, with Tyree contributing 12 receptions for 88 yards and a touchdown through the air to go along with his 189 yards and one score on the ground. The BYU defense ranks just 93rd in the nation against the run, which should give the Irish offense a good chance to find the necessary balance on offense to control the clock and the game flow against the more pass-heavy Cougars.

When quarterback Zach Wilson moved on to the NFL after the 2020 season, many wondered if the Cougars would be able to continue the same type of success that saw them come one game away from an undefeated season. Jaren Hall has since led his team to a 14-4 record and a current passing offense that ranks 24th in the nation. The junior has been exceptionally efficient to begin the year, completing 70% of his passes while throwing for 1,438 yards and a 12/1 TD-INT ratio through the Cougars’ first five games. After amassing a dismal -21 yards rushing in the first half a week ago against Utah State, the Cougars relied heavily on Hall to lead them back to victory. The Irish may have started their season slow, but they are light years ahead of the Aggies, and BYU head coach Kalani Sitake has to know going into Vegas this weekend they can ill afford any sort of offensive anemia, whether with the pass or run if they want to get the victory against Notre Dame.

The focal point of the BYU running game is Christopher Brooks, who transferred from Cal before the season to replace Tyler Allgeier, the now Atlanta Falcon who had departed for the NFL. Brooks looked especially good in the spring and has had a nice start to his initial Cougar campaign, rushing for 294 yards and four touchdowns while averaging 6.0 ypc. Unfortunately, nearly half of those yards were in week one against South Florida and the Bulls 126th ranked rushing attack, though Brooks was able to find more traction last week in the second half against the Aggies, finishing with 90 yards on 11 carries. BYU may have three starters atop their depth chart at running back, but Brooks appears to be the leader of the pack heading into the weekend with Lopini Katoa struggling and “consider me” Miles Davis questionable to play due to an injury suffered against Utah State.

More Picks: Get Our predicted point spread winner for the Oregon/Arizona 10/8/22 game >>>

Junior wideout Puka Nacua was expected to be the Cougar’s lead receiver in 2022, but he has been hampered by an ankle injury and hasn’t played since week two. Thankfully for BYU, they appear to have ample other air options and currently have four different receivers that have at least 15 receptions on the year; Keanu Hill, Chase Roberts, Kody Epps, and Brayden Cosper. Hill is the team leader in yards and touchdowns, while Epps tops out in receptions and his three receiving touchdowns are just one behind Hill. With Nacua not expected back this week, Jaren Hall will continue to look toward those four along with other options, including receiver Gunner Romney and tight ends Isaac Rex and Dallin Holker.

Once Notre Dame lost to Marshall, their BCS hopes were officially over, and they were quickly forgotten about in the college football title landscape. While the playoff dreams are still very much dead, the Irish have still won two in a row and, more importantly, found a real starting quarterback who can actually throw the ball consistently in Drew Pyne. BYU is undoubtedly talented, and I expect Jaren Hall and the Cougar offense to stay competitive against the Irish, but I believe Notre Dame has finally found their stride and, with an extra week to prepare, will be leaving Las Vegas with a win and cover against the Cougars.

Mike’s Pick to Cover the Point Spread: Notre Dame -3.5, Bet your Week 6 college football picks for FREE by taking advantage of a 100% real cash bonus up to $300 when you use promo code PREDICT100 at MyBookie Sportsbook!