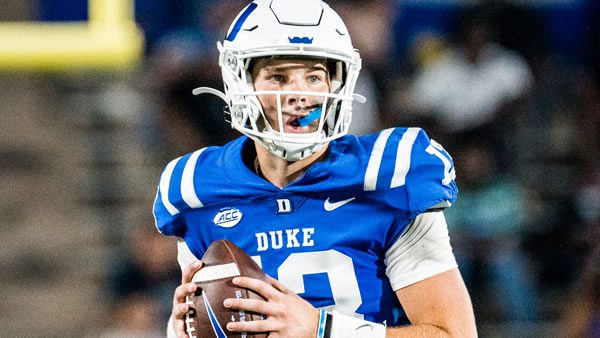 The Blue Devils come into the game with a 2-2 in Atlantic Coast play. Overall, they have a
mark of 5-3. This season, the Blue Devils have been favored in 3 game while posting an ATS mark
of 5-2. Their average over-under betting line is 51.25 leading to an over-under record of
3-4.

The Blue Devils are going for another win, as in their last game, they defeated Miami, despite
entering as the betting underdog. The team finished the game throwing for 1 touchdown pass.
Overall, the Blue Devils had 136 passing yards on a completion percentage of 52.0%. The team
ended the game with 4 rushing touchdowns, along with a total of 200 yards on the ground.

Quarterback Riley Leonard comes in the game having completed 143 of 222 passes for a passer
rating of 95.05. Overall, he has a total of 1693 passing yards. Through the air, the team will be
looking for a big game from leading receiver, Jalon Calhoun. On the season, he has caught 31 for
443 yards. The Blue Devils have turned to running back Jordan Waters a total of 83 times for a
total of 410 rushing yards.

The Eagles head into this week’s matchup with an overall record of 2-6. So far, they are just
1-4 in Atlantic Coast play. This season, the Eagles have been favored in 2 game while posting an
ATS mark of 1-6. Their average over-under betting line is 43.06 leading to an over-under record
of 2-5.

Boston College is coming off a 10 point loss to UConn by a score of 13-3. The Eagles entered
the game as 8.0 point home underdogs, making this an ATS loss. For the game, Boston College threw
for 259 yards, but did not come up with a passing touchdown. Their overall completion percentage
came in at 55.3%. In the rushing game, the Eagles did not find the endzone, while finishing with
a total of 76 yards on the ground.

Phil Jurkovec heads into the game as the team’s top quarterback, with a current passer rating
of 81.89 on a total of 1711 yards through the air. But, leading up to the game, he is listed as
questionable on the injury report (Undisclosed). Receiver Zay Flowers heads into the game, as the
team’s leader in receiving yards, with a total of 726. The Blue Devils have turned to run back
Pat Garwo III a total of 86 times for a total of 270 rushing yards.

Across their 5 previous road games, Duke has an ATS mark of 2-3-0. Their straight-up record in
these matchups was 2-3-0 while averaging 28.0 points per game.

The Eagles come into this week’s game having covered just 20.0% of their last 10 games. Their
overall record in these games is just 2-8-0. They have a negative scoring differential in these
games by averaging 17.1 per game and allowing 29.7. Their last 10 over-under record is 3-7-0.

Through their last 5 home contests, the Eagles offense has averaged 21.2 points per game while
allowing an average of 28.8. Boston College posted an overall record of 2-3-0 while going 1-4-0
ATS.

Heading into the game, the Blue Devils are ranked 32nd in points per game.

Although Duke has struggled to move the chains on 3rd down throughout the season, they have a
chance to take advantage against a Boston College defense that is allowing an average of 28.75
points per game and has had its problems getting off the field on third down.

Although the Blue Devils have turned to the passing attack at a below-average rate this
season, they have an opportunity to find success through the air vs a Boston College defense
allowing teams to complete passes at a rate of 63.67%.

On the ground, the Duke offense is averaging 205.12 yards per game, good for 21st in the
country. This has come while ranking 48th in attempts at 38.12 per game. This week, the Blue
Devils will be facing a Boston College defense ranked 89th in rush yards allowed per game. This
year, they have averaged 205.86 yards per game when facing defenses ranked outside the top
50.

Heading into this week’s matchup, the Eagles will look to improve their offensive output, as
they are ranked just 122nd in the NCAA in points scored.

One aspect of the game that could benefit a Boston College offense that struggles to generate
big plays in the passing attack is that they are facing off a Duke defense that has yet to
generate a lot of pressure on opposing quarterbacks. So far, the Blue Devils are just 59th in
sacks per game.

So far, the Boston College offense is averaging just 67.5 yards per game on the ground. This
production has come on an average of 30.0 rush attempts per game (121st). This week, the Eagles
will be facing a Duke defense that is 35th in rush yards allowed per game. So far, they have
averaged 27.0 yards per game when facing top 25 rush defenses.

Heading into the game, the Eagles will hope for some improved play from their defense, as they
are currently 84th at 28.75 points per game allowed.

Duke -9.5. Bet your Week 10 college football predictions for FREE by scoring a 100% real cash bonus on your first deposit up to $300 when you use bonus code PREDICT100 at MyBookie Sportsbook!